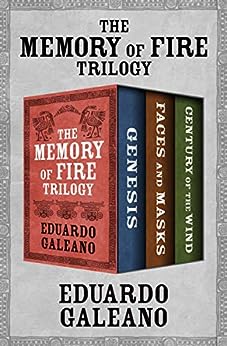 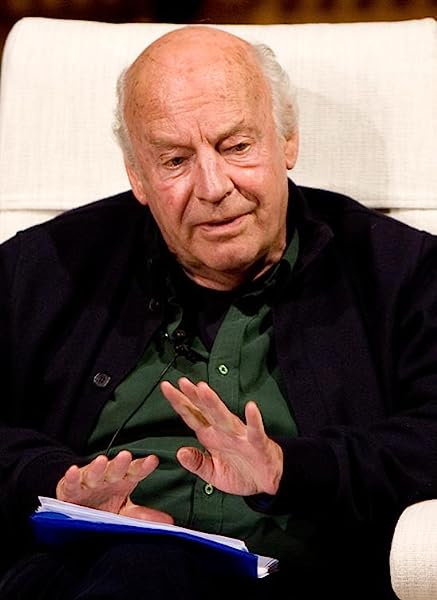 The Memory of Fire Trilogy: Genesis, Faces and Masks, and Century of the Wind Kindle Edition

Eduardo Galeano (1940–2015) was one of Latin America’s most distinguished writers. He was the author of the trilogy Memory of Fire, Open Veins of Latin America, Soccer in Sun and Shadow, Days and Nights of Love and War, The Book of Embraces, Walking Words, Voices of Time, Upside Down, Mirrors: Stories of Almost Everyone, and Children of the Days: A Calendar of Human History. Born in Montevideo, he lived in exile in Argentina and Spain for years before returning to Uruguay. His work has inspired popular and classical composers and playwrights from all over the world and has been translated into twenty-eight languages. He was the recipient of many international prizes, including the first Lannan Prize for Cultural Freedom, the American Book Award, the Casa de las Américas Prize, and the First Distinguished Citizen of the region by the countries of Mercosur.
--This text refers to an alternate kindle_edition edition.

Author Isabelle Allende, who said her copy of Galeano's book was one of the few items with which she fled Chile in 1973 after the military coup of Augusto Pinochet, called Open Veins of Latin America, "a mixture of meticulous detail, political conviction, poetic flair, and good storytelling."

Mary A Phalan
5.0 out of 5 stars Compelling history vignettes
Reviewed in the United States on December 9, 2016
Verified Purchase
This was a really compelling trilogy. As a former LATAM major in college, it gave me a smattering of the history of the entire region. It makes me look deeper, and also to to understand the US complicity with the dictators which continues the troubles to this day.
Read more
4 people found this helpful
Helpful
Report abuse

Amazon Customer
5.0 out of 5 stars Five Stars
Reviewed in the United States on March 7, 2018
Verified Purchase
What an amazing story teller. A great work of art.
Read more
One person found this helpful
Helpful
Report abuse

Jim
3.0 out of 5 stars Confusing
Reviewed in the United States on November 18, 2016
Verified Purchase
I found it hard to keep up with.
Read more
One person found this helpful
Helpful
Report abuse

C. Daniels
5.0 out of 5 stars Beautiful and essential.
Reviewed in the United States on June 26, 2015
Verified Purchase
This is a beautiful, essential book for anyone who cares about other humans.
Read more
9 people found this helpful
Helpful
Report abuse

darling
5.0 out of 5 stars Love.
Reviewed in the United States on February 13, 2015
Verified Purchase
Revisiting this trilogy 20 years after the first time I read it. This time I am reading it aloud, with my 10 year old, as 'a way in' to some of the history he's studying. Love.
Read more
11 people found this helpful
Helpful
Report abuse

adriana
5.0 out of 5 stars Five Stars
Reviewed in the United States on August 13, 2015
Verified Purchase
one of the best author, historian, poets to grace this earth
Read more
9 people found this helpful
Helpful
Report abuse

PCI B.
5.0 out of 5 stars Compelling history--what one won't learnin school
Reviewed in the United States on June 14, 2020
Superb writing. Each vignette is one or three pages long. It took me several months to read this trilogy, a bit at a time. The horrible ways the conquerers treated the conquered, and the struggles to resist are all here. Very important history to be aware of in order to understand its effects on all of us in the present day.
Read more
Helpful
Report abuse

Theo Ballgame
5.0 out of 5 stars The man from Uruguay.
Reviewed in the United States on December 3, 2016
Two of my loves--history and prose writing. A new way to see history--the tragedies, and the victories--and always the fight for equality and freedom.
Read more
2 people found this helpful
Helpful
Report abuse
See all reviews