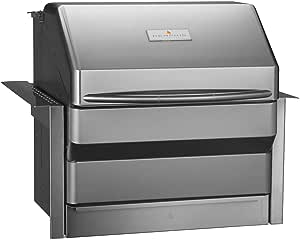 R. W. Geissler Sr
2.0 out of 5 stars Be aware that rain will enter your cabinet through the vent holes.
Reviewed in the United States on August 19, 2018
Great grill, poor design for an outdoor grill unless it is completely under cover from rain. The vent holes in the mounting flange, which run along both sides and across the back, allow rain to enter the cabinet below. When planning to smoke or roast something that takes some time, check the weather carefully.

The Memphis cover doesn’t cover the vent holes either. So rain at any time will flood your cabinet. Memphis answer to this is that the rain won’t hurt the grill. Memphis needs to design a better grill cover to prevent rain from entering the vent holes and extend the front of the cover down past the drawers. They also need to provide a trim kit to cover the space between the grill and cabinet cutout as done by other manufactures.

If Memphis were to redesign their grill cover, I would up my rating to 5 stars even though rain, while cooking, would still enter my cabinet.

As far as actual use of the grill for smoking, roasting and grilling, I couldn't be happier.

Aaron Turner
3.0 out of 5 stars Great grill (with a few caveats). Horrible Wifi/iOS app
Reviewed in the United States on July 10, 2020
We remodeled our backyard just before this whole COVID-19 thing happened and had a Memphis Pro built in grill installed in the island. I picked this grill because my wife wanted a gas grill because they're "easy to use" and she wanted to be able to occasionally use the grill rather than relying on me to always startup the Weber charcoal grill we've been using for the past 10+ years. I hate gas grills, so we compromised on this pellet grill.

What sold me on the Memphis is:

1. Stainless steel construction. It is really well built. While I've only had it for about 4 months now, it shouldn't rust out like my friend's Traeger pellet grill did.

2. Direct heat. Indirect heat is great for low & slow or when you're doing a reverse sear, but if you want to sear a steak you need direct heat. Most pellet grills can't do this.

3. Built in temp probe & monitoring- important for low & slow cooks. I've done a 30# turducken on my old Weber smoker which took 18hrs and so being able to monitor this over night via my phone is a great feature.

1. Temp controls work great. The grill lights easily and quickly automatically once you turn it on. Takes about 8min to come up to temp (450F). Definitely more convenient and pretty than my Weber kettle, but honestly I was able to get better results with the Weber + lump charcoal for grilling. But for low and slow, non-direct cooking the Memphis wins hands down.

2. It's as easy as reasonably possible to switch between direct and indirect heat. If it's not obvious, you need to swap out the heat deflector under the grates in order to do that. That does mean of course swapping between the two while cooking is a little problematic. That said, on the Pro model, the grate is broken up into 4 sections and you only need to remove the center two in order to replace the deflector. So as long as you don't have a lot of food on the grill you can do that.

3. No matter how the grill is configured, the left and right side of the grill are indirect cooking zones.

4. You do have to be careful about cooking with direct heat and too much oil/fat. Marinades with oil in them in particular can cause significant flare ups in the grill. Best to keep the lid closed for a few minutes and let it burn out in those cases, but I definitely have to be a lot more careful than with my Weber charcoal grill or gas grills I've used in the past.

5. Much to my surprise, my wife is actually using the grill on a regular basis. She's a great cook and so far enjoying learning the differences between using the grill vs. her oven.

6. The cover they sell is so so at best. I got mine free and sprayed it with Scotch Guard to keep the water out.

7. There are two "hoppers" on the pro, but there is only a single auger. I wish I could select between two different pellets, but in reality that may not work for most people. Right now my wife and I cook on our Memphis grill 3 or 4 times a week and living in California means low humidity so we can keep pellets in the hopper. If you live in Florida or other area with high humidity- that would be a disaster.

8. A really long "cool down cycle". Means you can't just turn off the grill when you're done using it like a gas grill. Wouldn't be a big deal (other than not being able to put the cover on), but for the fact you need to unplug or turn it off when not in use (see problems below).

9. There is a grate in top of the hopper to allow you to pour pellets in, but keep fingers out. I understand it's a safety issue, but one of the important things about all pellet grills is removing the pellets if you're not going to use it for a while because they will suck the moisture out of the air and ruin the pellets. Luckily, it's easy to remove, but I know my friend's Traeger doesn't have this "safety feature" which just is in the way.

1. In the very fine print of the manual it says you need to put this grill on a dedicated circuit or a switch. Doesn't say why. Apparently inductive loads on the same circuit (like a compressor motor on a refrigerator) causes the grill to "lock up". They should of made this much more clear and frankly put a filter on the power input to avoid this problem. We had to have our contractor rewire things to put our grill on a switch so it wasn't "plugged in" when not in use.

2. The wifi feature sucks. I've been working with Memphis on this for a couple of months now. They have sent me multiple replacement WIFI modules and even a replacement controller board. It still doesn't work.

3. Tech support is merely "OK" (only replying to emails once a day early in the morning) to "non-existent". When you pay this kind of money, you expect the manufacturer to stand behind their product- especially for one which says "Made in the USA". But here I am, writing this review and the last email I have from their technical support person is from June 17th. Today is July 10th. The wifi on my grill is still broken and they haven't replied to multiple emails requesting "next steps".

4. The iOS app is pretty horrible. I mean, I get that companies like this don't have a lot of experience writing apps like this and I had pretty low expectations going in, but even when the WiFi feature did work, the app was at best pretty bad- it merely technically worked. Most of the apps in this space (Weber has one as does BBQ Guru) aren't great either and have their own set of usability issues, but the Memphis app is IMHO the worst.

But I haven't been able to really use the app for about 2 1/2 months because something between the app or cloud service and/or Wifi module on my grill has been broken.

Honestly I've been holding off on this review for a while now- hoping technical support could resolve all my issues with this grill. But my first email to them was back in April and it's now July and it still doesn't work properly. Hence, I just can see giving this better than a 3 star review. Hopefully they will respond to my emails and fix my grill so I can use the wifi/app but I'm not very hopeful at this point.
Read more
6 people found this helpful
Helpful
Report abuse

Bill Hawks
5.0 out of 5 stars Best all-weather grill ever
Reviewed in the United States on August 25, 2019
I've owned my Memphis and have used it several times each week for about a year now. The range in the house sits idle most of the time. I prefer the Memphis. The thermal baffling provides exceptional temperature control on the coldest winter days, the coldest were 20F. Same with heavy rains of spring and sudden raging storms of summer. Never a problem. I leave my Memphis uncovered. I have a cover but I use the grill so frequently I don't bother with the cover. I keep mine on the back patio partially covered by the eve. What a great unit this is. The engineering is second to none. I thought I'd post because the other guy was worried about water infiltration. Never noticed any water problem with mine, and we get heavy weather in Kansas second to nobody. Best all-weather grill ever.
Read more
4 people found this helpful
Helpful
Report abuse
See all reviews