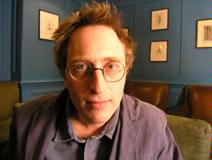 The Men Who Stare at Goats Paperback – Illustrated, October 13, 2009

by Jon Ronson (Author)
4.2 out of 5 stars 1,799 ratings
See all formats and editions
Sorry, there was a problem loading this page. Try again.

Now a major film, starring George Clooney, Ewan McGregor, and Jeff Bridges, this New York Times bestseller is a disturbing and often hilarious look at the U.S. military's long flirtation with the paranormal—and the psy-op soldiers that are still fighting the battle.

Bizarre military history: In 1979, a crack commando unit was established by the most gifted minds within the U.S. Army. Defying all known laws of physics and accepted military practice, they believed that a soldier could adopt the cloak of invisibility, pass cleanly through walls, and—perhaps most chillingly—kill goats just by staring at them. They were the First Earth Battalion, entrusted with defending America from all known adversaries. And they really weren’t joking. What’s more, they’re back—and they’re fighting the War on Terror.

An uproarious exploration of American military paranoia: With investigations ranging from the mysterious “Goat Lab,” to Uri Geller’s covert psychic work with the CIA, to the increasingly bizarre role played by a succession of U.S. presidents, this might just be the funniest, most unsettling book you will ever read—if only because it is all true and is still happening today.
Read more
Previous page
Next page

"A hilarious and unsettling book.... Ronson comes off as an unusual cross between Comedy Central's Jon Stewart and "The New Yorker's" Seymour Hersh."

"Ronson sets his book up beautifully. It moves with wry precise agility from crackpot to crackpot in its search for the essence of this early New Age creativity.... "

Jon Ronson is a documentary filmmaker and the author of Them: Adventures with Extremists. He lives in London.

The Men Who Stare at Goats
Read more

Jon Ronson is an award-winning writer and documentary maker. He is the author of many bestselling books, including Frank: The True Story that Inspired the Movie, Lost at Sea: The Jon Ronson Mysteries, The Psychopath Test, The Men Who Stare at Goats and Them: Adventures with Extremists. His first fictional screenplay, Frank, co-written with Peter Straughan, starred Michael Fassbender. He lives in London and New York City.

Nicholas Smith
5.0 out of 5 stars Another great Jon Ronson book
Reviewed in the United Kingdom 🇬🇧 on January 13, 2017
Verified Purchase
I have been reading my way through the various Jon Ronson books and sadly this was the last of his main books available (I do have the volumes of his shorter articles to keep me going though). Thankfully, this was another very strong book that often defies belief and were it not for Jon's sceptical voice throughout, it would be tempting to refuse to accept what is said. Amazing stuff and a real insight into the crazy stuff that becomes accepted over time and the question I wondered was whether any of it actually worked or delivered any tangible benefits. Another must read book. Highly recommended.
Read more
8 people found this helpful
Report abuse

N. Clarke
4.0 out of 5 stars Terrifying, and prescient
Reviewed in the United Kingdom 🇬🇧 on November 18, 2013
Verified Purchase
Jon Ronson's treatise on psychic spying has been somewhat diluted by its fictional film version, which conflates and dilutes many of the characters and episodes that feature in his original book. What is common to both, however, is the sense of unworldliness that possessed the US Government after 9/11 and the sheer weirdness of the solutions that were sought in order to overcome that challenge. It's just a pity that Ronson, as a talented outsider, can't really construct a linear narrative exposing the darker spin-offs of this weird science; the first half of the book is compelling but the second half consists of conspiracy theories that are only loosely related to the US psychic warfare programme. It is not his fault; a lot of this stuff would be buried far beyond the reach of an ordinary journalist, and the military machine being what it is, the endless buffer of bureaucracy will ensure that the real story is buried for many more years.

Ronson's attempts to patch together an evolutionary history of the "First Earth Battalion" put him at loggerheads with some of the strangest and most egotistical characters that have ever graced the pages of military history: far from being tight-lipped about their "powers" they seem to be on a partial ego trip and delight in drip-feeding tit-bits to journalists. Feted by gun-lobbyists and conspiracy theorists alike, it is scarcely credible that a standing army could have given some of these crackpots the time of day. Yet, damaged by its experiences in Vietnam and crushed by its failure to achieve a decisive victory in the "war on terror", US military policy has taken a number of disturbing turns that are the real source of worry here, beyond the comic opera of spoon-bending parties, goat abuse, and telepathy. Thanks to Ronson's work future generations will look back on these events as the consequences of doctrinal failure, rather than a scientific attempt to evolve military strategy beyond its current limits, which have proven to be all too fallible.
Read more
6 people found this helpful
Report abuse

S N
5.0 out of 5 stars Another Great Jon Ronson Production!
Reviewed in the United Kingdom 🇬🇧 on February 23, 2020
Verified Purchase
Awesome read. Funny and frightening. It's an easy read and I do enjoy Jon Ronson's books. It's definitely a recommended read. Packed well only packaging is not recyclable so that's one negative. The other negative is the book cover advertised is not the published version I received. I don't mind buying second hand but I would like the product to match the description which includes the image shown.
Read more
Report abuse

J. Sweetman
4.0 out of 5 stars The Scary Thing is that it might be TRUE
Reviewed in the United Kingdom 🇬🇧 on August 10, 2014
Verified Purchase
This book is a likeable romp through the world of secret services, conspiracies and military research with a psychic and psychological, if not occasionally psychotic, bias. It is well written and features a number of larger than life characters. As a reader you have to decide whether they are completely barmy, slightly deranged, the victims of bizarre experiments and whatever. The twist in the book is that quite a lot of the ideas have come home to roost in the war on terror which shows that inhumanity can take any number of interesting forms. I quite enjoyed it but wasn't convinced by a lot of the evidence.
Read more
One person found this helpful
Report abuse

Jay
5.0 out of 5 stars I adore Jon Ronson!
Reviewed in the United Kingdom 🇬🇧 on February 2, 2014
Verified Purchase
I was introduced to him whilst travelling Asia, by an Aussie. Which is weird considering I'm British and he's effectively been sitting under my nose the entire time.

So first I downloaded The Psychopath Test and before I was halfway through had downloaded The Men Who Stare At Goats and Them: Adventures with Extremists.

I'm normally a novel fan, but straightaway he had me hooked. I adore his writing style and I think I may have a tiny crush on him. Especially after watching his videos about the group of students who stole his identity.