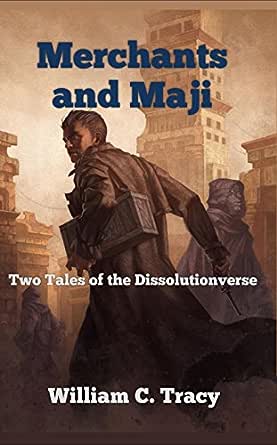 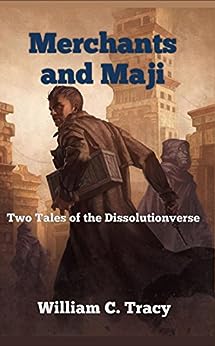 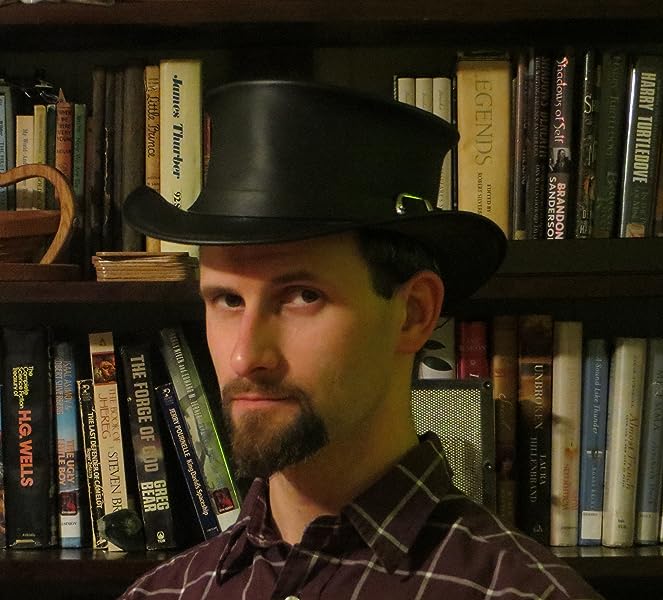 "Another winner in Dissolutionverse!" - Dyrk Ashton, Author of PATERNUS
"Merchants and Maji was hard to put down once I started, and left me eager for the next Dissolutionverse release." - Reese Hogan, Author of HOLDING THE ASHES
"With ten homeworlds to visit, you'd never get bored." - Thomas W. Everson, Author of TEHE RAIN EXPERIENCE Series
"This was my first foray into the Dissolutionverse world and the writing of Tracy, and it proved to be a thrilling and wildly entertaining read." - Jordan
"I have already pre-ordered the third book, so if you are a fan of fantasy and/or science fiction, this series is for you! I highly recommend this!" - M. Weber

He currently has five books out, from a coming of age story,to tales of political intrigue, to a Sherlock Holmes-like mystery, to a JulesVerne style adventure, to the first book of an epic space opera, titled THESEEDS OF DISSOLUTION. Several books include LGBT-friendly elements as well.

William is a North Carolina native and a lifelong fan ofscience fiction and fantasy. He has a master's in mechanical engineering, andhas both designed and operated heavy construction machinery. He has alsotrained in Wado-Ryu karate since 2003, and runs his own dojo in Raleigh NC. Heis an avid video and board gamer, a reader, and of course, a writer.

In his spare time, he cosplays with his wife suchcombinations as Steampunk Agent Carter and Jarvis, Jafar and Maleficent, andDoctor Strange and the Ancient One. They also enjoy putting their pets in cutelittle costumes and making them cosplay for the annual Christmas card.

Or follow him on Twitter at twitter.com/wctracy for writing updates, cat pictures, and thoughts on martial arts.

4.2 out of 5 stars
4.2 out of 5
13 customer ratings
How does Amazon calculate star ratings?
Amazon calculates a product’s star ratings based on a machine learned model instead of a raw data average. The model takes into account factors including the age of a rating, whether the ratings are from verified purchasers, and factors that establish reviewer trustworthiness.
Top reviews

Dyrk Ashton
5.0 out of 5 stars Another winner in Dissolutionverse!
Reviewed in the United States on October 9, 2016
Verified Purchase
Was very much looking forward to reading another of Tracy's novellas, and I was not disappointed! Merchants and Maji is another work in the Dissolutionverse story world set up in Tuning the Symphony. This contains two stories, actually - the second featuring a couple of characters we've already come to know and love in Tuning. All I can say is I can't wait to read the first full novel in this world Tracy is prepping us for!
Read more
2 people found this helpful
Helpful
Comment Report abuse

word addicted
4.0 out of 5 stars Clever, creative, well written
Reviewed in the United States on August 1, 2018
Verified Purchase
I enjoyed both tales, thought they were very clever. The descriptions of the maji's "song" were very original, I thought, and held a sort of beauty. I would read more by this author. I found the stories to be well-written and creative.
Read more
One person found this helpful
Helpful
Comment Report abuse

Reality tourist
3.0 out of 5 stars better for younger readers
Reviewed in the United States on April 11, 2019
Verified Purchase
young man with phobias and fears is torn from his earthly home and ends up in an alien world and not knowing how he got there. he must learn thier ways and how to control his powers that he didn't know he had. this series chronicles his adventures.
Read more
Helpful
Comment Report abuse

Chelsea
4.0 out of 5 stars Enjoyable, wish it was longer
Reviewed in the United States on December 11, 2016
I was approached by the author of this book after he saw I had reviewed a Brandon Sanderson book. He thought that I would like his book due to the similarities in genre so he took the chance by offering me a copy to review for him. I am glad he did.

This book was very enjoyable to read. It has a steampunk sci-fi feel to it so anyone who liked the Firefly/Serenity series/movie and/or liked Brandon Sanderson's books on the Allow of Law will most likely greatly enjoy this book.

It is not a long read, which is the only reason I rate this one as a four rather than a five star. The book is broken up into two parts of a story. The first part follows one set of individuals which makes me think of a Firefly episode, while the second part then goes into a few years after the first and the problems which are still arising from certain events. While this is fine for the most part, I feel a little cheated about learning and meeting these characters in the first section and then never finding out what exactly did happen to them. In the second section I did not even realize years had passed until half to 3/4th of the way through it when the original incident was even mentioned.

I truly hope the author comes out with another book from this world and makes it a bit longer with sticking with all the same characters, but besides that it was a very enjoyable read. Thank you Mr. Tracy for allowing me the opportunity to read and review your book.
Read more
2 people found this helpful
Helpful
Comment Report abuse

Kriti Godey
4.0 out of 5 stars Two great novellas!
Reviewed in the United States on January 1, 2017
Merchants and Maji is a collection of two novellas set in the same universe (the “Dissolutionverse”) – Last Delivery and The First Majus in Space. It’s been a while since I’ve read anything self-published (mainly because I don’t know how to find good self-published work) but I was intrigued by the description of this book and decided to accept a review copy.

I’m a big fan of worldbuilding, and I thought the world of these stories was pretty interesting. I don’t read a lot of science fantasy, so I’m always fascinated by secondary worlds that have both magic and a modern-ish level of technology (I guess urban fantasy does that too, but that ends up being too close to our world, so I don’t find it as interesting.) The Dissolutionverse is a set of ten planets inhabited by different sentient species that are linked together by magical portals. Among other things, the maji are the only people capable of creating these portals, so they’re integral to economy and trade.

The first story, Last Delivery, follows a group of ragtag merchants who accept a particularly shady assignment out of desperation. Once they figure out what they’re dealing with, they have to figure out what (if anything) they want to do about it. I enjoyed this story, the crew of the trading vessel (I don’t think I can call it a spaceship since it doesn’t actually fly) was well fleshed out, and I would read more of their adventures gladly. It isn’t just a simple adventure story either, it ends up tying into the politics of the world, and it gives the protagonist, Prot (I couldn’t help but imagine him as Kevin Spacey in K-PAX because of his name) a solid growth arc as well.

The second story, The First Majus in Space, is about the first known attempt to launch people into space the traditional way. We find out more about the magic system in this story because the spaceship is designed to require a maji’s power to fuel it. When the launch goes wrong and the original majus assigned to the ship is injured, veteran majus Origon Cyrysi must replace him at the last minute. Nothing goes according to plan during the mission, though, and it reveals deeper forces working against the maji. I liked this story too, I liked learning more about the larger world and how the maji fit into things. Origon is somewhat of a curmudgeon, but a likeable one. My main frustration with this story was that it seemed like setup for a larger story, so it didn’t feel as complete as Last Delivery, there are a couple of unanswered questions at the end. Also, the antagonists’ plot didn’t make as much sense, I feel like it was a little bit too convoluted and there were too many variables for it to succeed.

Overall, I’d recommend this book, especially if you’re looking for something that feels like old school sci-fi but is still modern. The author is also working on a novel set in this universe, which I think will be great since it will have the room to explore the world and politics more.
Read more
One person found this helpful
Helpful
Comment Report abuse
See all reviews from the United States