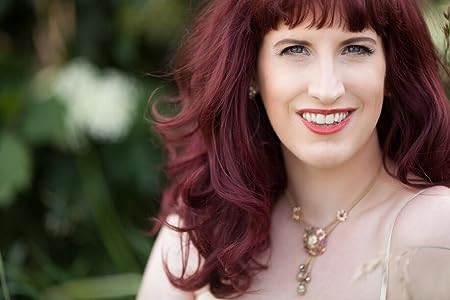 MEREDITH ROSE has been a literary rebel since the age of nine when she began rewriting novel endings she didn’t like. Childhood peers mocked her for using words longer than two syllables, and adults told her that she would never be able to make it as a writer–because it’s, like, not a real career.

Thoroughly undaunted, (well, maybe a little daunted at times, to be honest) over the next two decades she secretly pursued writing novels and finally sold her first book at age twenty-nine (under a different name). She went on to publish another three novels, in which the experience of rewriting stuff actually came in useful.

CHAINS OF SILVER is her first young adult novel, and she wrote it for her two teenage daughters who are also talented rebels in their own ways. The sequel, CLAWS OF BRASS, is also available. Five books are planned in the Alchemy Empire series.

When she’s not writing, Meredith goes on bookstore dates with her husband, studies Welsh, dabbles in graphic design and altered art, and reads Tumblr way too much. Bucket list items include becoming a yarn bomber, Argentine tango dancer, and an opera singer. 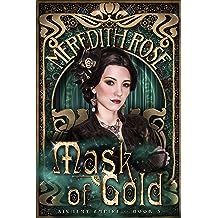 Mask of Gold: a Teen Steampunk Romance Novel (Alchemy Empire Book 3) May 18, 2017
by Meredith Rose
( 24 )
$3.99
The power of an empire is hers—for the price of all she loves most…
No longer apprentices, Minx and her friends are the newest members of the Theatrical Guild. They’ve been invited to the empress’s summer palace in Hellenia to perform for the nobility and seek patrons and jobs. Minx becomes the favorite of the royal family, but her newfound power means turning her back on the people who need her most. And it could tear her apart from Dietrich, maybe forever.

Seaside Fiction With a Dash of Dark Fantasy Romance


Mask of Gold is the third book in the Alchemy Empire series. It’s set in the alternate universe of the Mercian Empire, a Victorian meets Futuristic world where steampunk magic fuels technology. Everyone is “totally cogged” about theater, but there are social lines that must not be crossed. An actress may dance with a prince, but commoners who clash with royalty will be harshly punished.

Coming of age is always bittersweet—the sense of loss combined with newfound independence. For Minx Mellor, it’s no different. She says goodbye to her old apprentice room the same day she gets to taste absinthe for the first time. And soon, she’s off on her first airship flight to the empress’s palace by the sea and a host of new challenges and adventures as an official adult.

Minx is juggling palace politics and an exhausting schedule of performances. Plus, Empress Antonia is teaching her to use her animancy powers—the magic of the soul. Being the empress’s new favorite means a level of power Minx could never dream of having. She longs to use that power to do good, to have a voice, to help people she would never be able to help otherwise.

But great power comes at great cost. And there’s a revolution brewing. Should she give up her values, her art, her love, to be the person the empress wants her to be? The one power she may not have is the power to walk away…

Excerpt 1:
The last item I took from my old room was the alarm clock I paid for myself with almost all of my fifth year apprentice stipend.
A draft swirled around the bare beds and now-empty room. Goosebumps raised on my arms. And for one second, I would have done anything to turn back time.
In a few months, two more little girls would sleep in those beds, put their treasures in that trunk. Maybe they’d sit in my class. They’d never know their room was full of the ghosts of those of us who had gone before.
I shivered. This was not my room anymore. “Take care of them,” I whispered.
I shut the door, locked it, and pocketed the key to turn in to Master Fenrey’s secretary. Alarm clock in hand, I walked down the quiet corridor and left the apprentice wing for the last time.

Excerpt 2:
Another agonizing, tantalizing heartbeat stretched between us.
Then he crushed me against him, pressing my head against his chest, arms like iron around me.
He was shivering, his breath like gravel. His heartbeat pounded against my face.
I tried to lift my head. Give him my mouth as we both wanted.
He pressed harder, trapping my head against him, groaning. “Friends,” he said, his voice deep and rumbly against my ear. “That’s what we agreed.”
I wrapped my arms around his chest, my throat tightening at the realization that he was holding me here because it was the only way for him to honor the boundaries I set.
The ones I seemed determined to break.
Read more 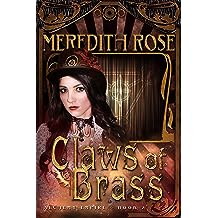 When Minx Mellor’s enigmatic theater director, Dietrich Wolff, rescued her from a serial killer, he never dreamed his own life would now be threatened. Dark magic is turning him into someone he doesn’t recognize, with memories that aren’t his own. From dank alleys to the Throne Room of Wynstanham Palace, Minx searches for a way to stop the magical disease. But no gadgets or dramatic performances will help this time. And the cure will bring her face to face once again with the monster that haunts her soul—

—if she can keep Dietrich alive long enough to succeed.


Claws of Brass is the second book in the Alchemy Empire series, exploring the Mercian Empire, an alternate universe full of steampunk devices and magic, where everyone is totally mad for theater. It’s Victorian meets Futuristic, with a dose of fantasy romance for good measure.

Minx has to juggle the demands of her final year of apprenticeship, a new beau, and her growing worries that something is terribly wrong with Dietrich Wolff—and that it might be her fault.

As the countdown progresses and time grows short, Minx realizes that it’s not just about saving Dietrich. She deserves to save herself—to grow from victim to survivor to a woman of power. And if she can do that, no one will be able to cage her ever again.

Excerpt 1:
“You shouldn’t look at me like that,” he whispered, his eyes burning dark, sorrow carving lines around his mouth.
“I’m not.”
He shut his eyes again, clenching his jaw. “You don’t know how easy it is to read your face. Your eyes…” His fist struck the desk. “Dammit, why did you come here?”
My heart ached watching him fight whatever unseen anguish tormented him. “Tell me what’s wrong. Let me help.”
His gaze bore into me. “You can’t. I spent the last month traveling to every healer in Cymru, and none of them could do a thing. In fact, your being here makes it worse.”
“Dietrich Wolff, you tell me what’s going on right now. It involves me. I have a right to know.”

Excerpt 2:
“I won’t go back. I’m not staying another night with that…that—” Her voice cracked. She swallowed, and her expression hardened. “I’d rather sleep in the costume shop.”
I nodded as if I understood—which I didn’t. “Maybe you can stay in our room tonight. I’m sure Thea won’t mind.”
“Thank you. But I’ll need more than one night. We’re done. It’s over.”
“You want to change roommates?”
It wasn’t impossible to do, but it was a little tricky. You had to get permission from the theater manager, Master Fenrey, and everyone involved in the roommate swap had to agree to it. And you could only do it three times for your entire apprenticeship. Master Fenrey said having to work through roommate conflicts was a good way to build character.
It was also apparently a good way to get hit by flying boots, but enough about me.

For fans of theater romance… 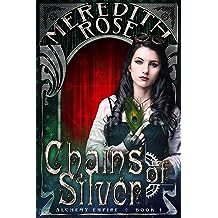 In the high-stakes world of the theater, stage fright can seriously crank your career, so apprentice Minx Mellor hides her phobia, studying as a technomancer to create fantastic, steam-powered devices.

But when the mysterious serial killer known as The Peacock targets one of their own, Minx can hide no longer. To save the life of the actress she loves like a mother, she teams up with her sworn enemy and a dashing young director whose powerful magic wakes the nightmares she’s kept secret for years.

When disaster strikes, Minx must face the horrors of her past and find the courage to do what she vowed she’d never do again.

Even if it means risking her life as bait to trap a murderer.

From the shadows of cobblestoned alleys and the glittering world of an aristocracy gone mad for theater comes the first book in a young adult dark fantasy romance series about the power of creativity and the resiliency of the human spirit.

Victorian fantasy in an alternate universe…


Chains of Silver is a young adult steampunk romance novel set in world where theater reins supreme. Expect lots of steampunk clothing, tea, and excessive politeness—as well as humor, and some surprisingly modern touches—all in a boarding school for theater geeks.

Oh, and watch out for sewer alligators.

It’s not all steampunk devices and gadgets. Minx is a strong female character, flawed, but well-meaning. She has powerful shapeshifter magic and has suffered the worst abuse for it, leaving her with stage fright, claustrophobia, and a deep fear of men. She masks her fears with a sassy attitude and her talent as a genius inventor. Few people know the extent of her true abilities.

Her best friends are apprentice stage manager Thea and playwright apprentice Raymond. Her nemesis is haughty apprentice actress Delphine. They are overseen by the young, brilliant director, Dietrich Wolff. He refuses to let Minx remain scared of him even though his peculiar kind of magic reminds her of the terrors of her past.

To fulfill their mission, they must set aside old hurts and work together, finding courage to make the sacrifices necessary to save the ones they love.

I smiled tightly. “You’re not going to let her push you out, are you?”
“Do you think she can?”
I gave a speculative little hum, like I was weighing the question. “The seventh-years have the odds at three to one in your favor.”
He chuckled. “Seriously? That’s flattering. The staff is only giving me a fifty-fifty chance.”
I giggled, and brought my hand to my mouth to stifle it. “So who do you think is right?”
His eyes took on an intensity that had my heart thudding again. “Anyone who bets against me is a cog-brained idiot.”
My breath caught. “I believe you,” I murmured.

I chuckled. “That’s…so kind of you.”
Thea patted her upswept hair. “No, it’s not. It’s rule-breaking with malicious intent.”
I put my arm around her waist and squeezed. “Yes, but it was for me. That makes it kind.”
She hugged me back. “What she did to you last year was unforgivable. Just because you told on Director Hyll doesn’t give her the right to sabotage your work.
Read more