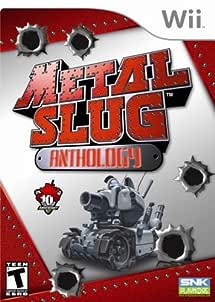 Metal Slug Anthology is the definitive collection of the intense shooter series. It includes all six of the classic games, all on one disc -- with ammunition and firepower than ever before. You've got an incredible arsenal waiting for you, from destructive pistols & combat vehicles to a stockpile of grenades. Players' enemy-killing capabilities are upped to off more evil-doers in this 10th anniversary edition of an arcade classic. Includes Metal Slug, Metal Slug 2, Metal Slug X, Metal Slug 3, Metal Slug 4 and Metal Slug 5.

Game History
In 1996 an arcade legend was born with the release of Metal Slug: Super Vehicle 001. The military-style themes, and a side-scrolling platform mixed with a wacky sense of humor and hilarious cartoon style, proved extremely popular to a decidedly wide audience. Based on this success, seven more Metal Slug sequels would be developed and released.

Ten years later, The Metal Slug game play and popularity are still going strong. To celebrate, the creators of the Metal Slug Anthology stopped at nothing to provide a 2-D, side-scrolling compilation for the Wii that is perfectly compatible with all the great game play possibilities that the Wii has to offer.

Storyline and Gameplay
Each included game in the Metal Slug Anthology offers game play and game objectives centered around a futuristic battle between two military groups known as the Regular army, and the Rebellion. In 2026, the Rebellion army launches an assault that pushes the Regular army forces to the brink of destruction. With superior numbers of troops and weapons, the Rebels overwhelmed the Regular army in all aspects.

Seeing their disadvantage to carry out direct attacks against the Rebellion, the Regular army then decided to carry out numerous special operations and create certain vehicles to accompany their commandos. As a direct result of this new plan, a newly designed tank code named "Metal Slug" was put into production.

Unfortunately, the Rebellion captured many of the newly produced Metal Slug tanks, and starting using them against the Regular army. With their government and military in shambles, the Regular army gathered its scattered troops and launched a desperate counter attack; recapture the stolen vehicles and use them to destroy the opposition. If the vehicles can't be captured, destroy them.

Your job is to help the Regular army defeat the Rebellion by using a myriad of different male and female characters, vehicles (including various animals and tanks), and weapons.

The Subsequent releases of Metal Slug titles (all included in the Anthology), continued to incorporate different antagonists, with more high-tech means and methods employed to attack the Regular army. Experience all the action and storylines with Metal Slug Anthology.

4.3 out of 5 stars
4.3 out of 5
123 global ratings
How are ratings calculated?
To calculate the overall star rating and percentage breakdown by star, we don’t use a simple average. Instead, our system considers things like how recent a review is and if the reviewer bought the item on Amazon. It also analyzes reviews to verify trustworthiness.

Anthoy F. Stefani
5.0 out of 5 stars Simple Fun
Reviewed in the United States on August 4, 2016
Platform: Nintendo WiiVerified Purchase
It is fun. a lot of fun, and you don't need to use the clunky wii remote gimmick or the nunchucks. It is a fun game to play with a friend over as opposed to lets say a non gamer who comes over and tries to play you in one of the Mortal Kombat games. You can coop and the commands and controls are about as straightforward as they come. The game itself has decent graphics it is hard as hell so it is nice to know that you have infinite continues. This game was definitely a Quarter devourer back in the day. If it gives you any idea how enjoyable this game is, i bought it shortly after the original Wii came out and sold it for some dumb reason and now I am just getting back around to purchasing it again.
Read more
2 people found this helpful
Helpful
Comment Report abuse

RockStar#1
5.0 out of 5 stars A real treat for a perfect price.
Reviewed in the United States on March 2, 2015
Platform: Nintendo WiiVerified Purchase
I remember when I first played Metal Slug in the arcades several years ago. I LOVE the constant warfare/blasting of enemy soldiers, machines, and helicopters. You can even enter a tank or ride a camel to progress easier through the game or collect power-ups. Not to mention the awesome hand drawn foregrounds/backgrounds in every level!

The only downside is that when you rescue prisoners, your count goes back to zero if you lose a life. Overall, Metal Slug Anthology is deeply challenging, and I really love the gore and violent factor -- so, fair warning, this isn't for the faint of heart. There WILL be bloodshed, screaming, and people running around on fire, hence the "Teen" rating of this game. Also, I strongly recommend using the Nintendo GameCube controller, although it is quite fun to flick the Wii controller to throw grenades around.

Still, how can you NOT want to have such an awesome compilation -- 7 games on one disc?! So if you love Metal Gear Solid or the Contra series, then you will LOVE Metal Slug Anthology. There are also 4 other Metal Slug games on other platforms, which I will list for you now.

Shivershorts
5.0 out of 5 stars Great ports of the classic games.
Reviewed in the United States on March 19, 2014
Platform: Nintendo WiiVerified Purchase
If you're wondering whether you should get the PS2 version or the Wii version, this one is the best choice. With that said, let me provide some details:

- The biggest issue with the Metal Slug Anthology is the input lag. Regarding the PS2 version, Metal Slug 1 has the greatest input lag and it made the game frustrating to play, especially for a game in which timing is key. For the rest of the games, lag is reduced but still noticeable and somewhat distracting. I don't remember Metal Slug 6 having any significant lag. Regarding the Wii version, input lag is reduced across the board. The Wii's Metal Slug 1 port has barely noticeable input lag and is far from game-breaking, while the rest of the Metal Slug games have next to none.

- The PS2 version has a typical "Return to Menu" option when you run out of credits while playing (if you turn on limited credits, it operates much like an arcade game would work and only allots a certain amount of continues). For some reason, I have yet to find an option on the Wii version that allows me to return to the main menu after losing a game so that I may start a new one. So far, I've had to reset the entire game using the Wii's built-in reset option on the Home screen. It's irritating, but not enough to make me want to resort to playing the PS2 version.

So, if you are a Metal Slug fan and are willing to go the extra mile to enjoy these old masterpieces, this is the one for you.

Billy Chatterton
3.0 out of 5 stars A great game, but on the Wii U or newer Wii there isn't a good control scheme available
Reviewed in the United States on January 17, 2016
Platform: Nintendo WiiVerified Purchase
First up these games are great! Arguably the best shooting series around!
Metal Slug is well designed and well rounded, and having all the main installments to date at the time of release was great! The games still hold up well today!

So why only 3 stars? The control options suck so badly on the Wii U or Wii without GameCube ports.
I'm playing on a Wii U with the Wii mote and movement jumping and firing works fine, but throwing bombs is done by shaking the Wii mote. Not only is this unreliable at best, but it throws off the rest of your game having to grip tight to shake you can't nimbly move around and the game is all about moving around while playing.

If you have a Wii with GameCube ports built in I'm sure you will enjoy every aspect of this game, but if you can't find something better than a Wii mote you will be disappointed.

Note: classic controller is not supported, and the Wii U GameCube adapter appears to only be supported by Smash Brothers U, and none of the Wii U pro controllers etc work on the Wii emulator portion of the console. so disappointed.
Read more
3 people found this helpful
Helpful
Comment Report abuse

CreateEnergy
5.0 out of 5 stars Perfect Arcade Ports
Reviewed in the United States on February 2, 2011
Platform: Nintendo WiiVerified Purchase
I remember playing the Metal Slug series extensively both on home consoles and at arcades during the mid to late 90's. This collection for the Wii contains Metal Slug 1-6. In addition to the games, there is a Metal Slug Gallery which contains various memorabilia that can be unlocked when you earn tokens during gameplay.

For the Wii, I recommend using the PS2 to Wii adaptor as the action gets pretty insane and is better served with a traditional control pad(the PS2 pad feels comfortable for me). The games are perfectly emulated(with the colorful Neo-Geo sprites and big explosions) and you even get the familiar Neo-Geo jingle at the start-up screen of each game.

Each of these Metal Slug games would've costed between $250-$300 new in its AES form(I remember paying $300 for a brand new Metal Slug X cart in 1999). So this is a tremendous value with 6 completes games at around(or under) fifteen bucks on Amazon. Hectic and fast-paced 2D action, you can get your Metal-Slug fix with this fun Anthology on the Wii.
Read more
One person found this helpful
Helpful
Comment Report abuse
See all reviews

nicholas rumleskie
4.0 out of 5 stars A collection of the first 6 Metal Slug games.
Reviewed in Canada on September 5, 2018
Platform: Nintendo WiiVerified Purchase
I only two flaws with the game is number one music sometimes plays when it shouldn't play isn't a deal-breaker but feels a bit lazy. Number two is in certain games there is a few seconds of load time between each section of the level. It kind of makes the console look weak and I honestly have no reason for why it needs to load. But I don't see any other cheaper alternative.
Read more
Report abuse