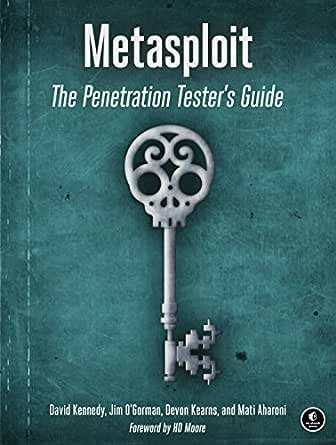 Flip to back Flip to front
Audible Sample Playing... Paused   You are listening to a sample of the Audible narration for this Kindle book.
Learn more
ISBN-13: 978-1593272883
ISBN-10: 159327288X
Why is ISBN important?
ISBN
This bar-code number lets you verify that you're getting exactly the right version or edition of a book. The 13-digit and 10-digit formats both work.

"It's a great book to get people started, has examples to walk through, and includes more advanced topics for experienced users."
—Dark Reading

David Kennedy is Chief Information Security Officer at Diebold Incorporated and creator of the Social-Engineer Toolkit (SET), Fast-Track, and other open source tools. He is on the Back|Track and Exploit-Database development team and is a core member of the Social-Engineer podcast and framework. Kennedy has presented at a number of security conferences including Black Hat, DEF CON, ShmooCon, Security B-Sides, and more.
Jim O'Gorman (Elwood) is a professional penetration tester, an instructor at Offensive Security, and manages Offensive Security’s consulting services. Jim has lived online from the times of BBS’s, to FidoNet, to when SLIP connections were the new hotness. Jim spends time on network intrusion simulation, digital investigations, and malware analysis. When not working on various security issues, Jim spends his time assisting his children in their attempts to fight Zombie hordes.
Devon Kearns is an instructor at Offensive-Security, a Back|Track Linux developer, and administrator of The Exploit Database. He has contributed a number of Metasploit exploit modules and is the maintainer of the Metasploit Unleashed wiki.
Mati Aharoni is the creator of the Back|Track Linux distribution and founder of Offensive-Security, the industry leader in security training. --This text refers to an alternate kindle_edition edition.

4.6 out of 5 stars
4.6 out of 5
247 global ratings
How are ratings calculated?
To calculate the overall star rating and percentage breakdown by star, we don’t use a simple average. Instead, our system considers things like how recent a review is and if the reviewer bought the item on Amazon. It also analyzes reviews to verify trustworthiness.
Top reviews

Steve Abbitt
2.0 out of 5 stars Warning! Very Outdated...
Reviewed in the United States on April 15, 2016
Verified Purchase
As of April 2016 (v4.11 of MetaSploit), this book is horribly outdated. I have gone through about a third of the book and half or less of the commands work in MetaSploit and require research online to find the current way to run them. This also applies to most of the non-MetaSploit tools that the author suggests. I'm giving it 2 stars for the theory and concepts that the author presents, but other than that you can find more up to date MetaSploit tutorials online for free.
Read more
126 people found this helpful
Helpful
Comment Report abuse

Siren
2.0 out of 5 stars So very outdated
Reviewed in the United States on July 7, 2018
Verified Purchase
I'm returning this... unfortunately the information within it is so outdated, its really not very helpful and doesnt apply to today's version of Metasploit much. The outdated information might be helpful to some as a base or some standard information - but its not helpful to me and not worth the pricetag, you can find all of that standard information online. The author needs to make an updated version - that I would buy.
Read more
3 people found this helpful
Helpful
Comment Report abuse

JZ
3.0 out of 5 stars Good book. However
Reviewed in the United States on January 17, 2017
Verified Purchase
Good book. However, it is a bit outdated. The commands changed enough where I had to do external research to follow along with the exercises.
Read more
9 people found this helpful
Helpful
Comment Report abuse

Juan C. Mendez
5.0 out of 5 stars A great read for the aspiring pentester!!
Reviewed in the United States on January 21, 2020
Verified Purchase
I'm a student in the art of ethical hacking. This book on metasploit is great. It is very in depth and helps you understand the framework. I use it as reinforcement resource to my college textbook.
Read more
Helpful
Comment Report abuse

T. Jensen
5.0 out of 5 stars Fantastic
Reviewed in the United States on June 15, 2012
Verified Purchase
I love this book. I origionally bought it on Kindle and decided it was a must have for my classroom so I bought a hard copy as well. Unlike most tech books this doesn't make my brain feel like mush. I spent 2 hours reading it tonight and enjoyed it as if it were fiction. I hope these guys write another book. I'd love a human readable book on software analysis to identify exploits.
Read more
One person found this helpful
Helpful
Comment Report abuse

J_FRESH
5.0 out of 5 stars Buy this book
Reviewed in the United States on January 12, 2015
Verified Purchase
A must have for any security professional. I per-ordered this book before it came out in 2011 and I still read it at least once a year. This book will not only help you master Metasploit it will give you different approaches that can be deployed to a variety of pen tests.
Read more
One person found this helpful
Helpful
Comment Report abuse

George Miller
4.0 out of 5 stars Good Read
Reviewed in the United States on March 15, 2019
Verified Purchase
If your gonna pen test should know this.
Read more
Helpful
Comment Report abuse
See all reviews

O. Hansen
5.0 out of 5 stars Well done Kindle version
Reviewed in the United Kingdom on June 30, 2013
Verified Purchase
I already knew Metasploit very well (or so I thought) but I've learnt a lot more through this book. No need to repeat what all the other reviewers have said, this is a well written and easy to understand book.

I bought the Kindle version, in too many cases with technical books the conversion from print to Kindle seems to have been an afterthought, but in this case it's very well done. Recommended.

MR A M THOMAS
5.0 out of 5 stars Amazing book
Reviewed in the United Kingdom on July 19, 2013
Verified Purchase
This book is simply amazing and if you have an interest in using the MS framework look no further than this release. It does a great job of explaining how and why it works and also a very good guide on the most popular tools within it.

Don`t let the price put you off, you will see in the first 5 minutes of reading that you have invested wisely.

Mike Miller
5.0 out of 5 stars Why would you buy anything else?!
Reviewed in the United Kingdom on May 15, 2014
Verified Purchase
Ok, so you've most likely found yourself here because you're looking for a book on Metasploit...

Firstly; DO NOT be put off by the price! It is worth every single penny.

Secondly; if you want a book on Metasploit; why would you even consider anything else?! When you research the people who've written this (David Kennedy, Jim O'Gorman, Devon Kearns and Mati Aharoni), then you realise that you're getting a book written by arguably some of the most experienced people in the world.

Metasploit is a hugely powerful framework, capable of sooo much. I thought I knew Metasploit *reasonably* well, until this book arrived!

It's clear, concise, well written and a great way to learn about one of the world's most powerful hacking tools.

Highly, highly recommended for anyone serious about learning Metasploit.

T R
5.0 out of 5 stars A must have
Reviewed in the United Kingdom on July 27, 2016
Verified Purchase
Who better to explain the masterpiece if the master itself.
A(nother) great work from David and the Metasploit team
Read more
Report abuse
See all reviews