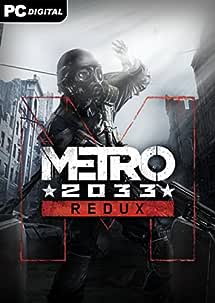 by Deep Silver
Platform : Windows Vista, Windows 8.1, Windows 8, Windows 10, Windows 7 |
Rated: Mature
| DRM: Steam
3.5 out of 5 stars 17 ratings
Currently unavailable.
We don't know when or if this item will be back in stock.
Note: After purchase, you can access the item in Your Games Library.
By placing your order, you agree to our Terms of Use.
This product is non-returnable and non-refundable.
Note: Currently, this item is available only to customers located in the United States.

In 2013 the world was devastated by an apocalyptic event, annihilating almost all mankind and turning the Earth's surface into a poisonous wasteland. A handful of survivors took refuge in the depths of the Moscow underground, and human civilization entered a new Dark Age.

The year is 2033. An entire generation has been born and raised underground, and their besieged Metro Station-Cities struggle for survival, with each other, and the mutant horrors that await outside.

You are Artyom, born in the last days before the fire, but raised underground. Having never ventured beyond the city limits, one fateful event sparks a desperate mission to the heart of the Metro system, to warn the remnants of mankind of a terrible impending threat. Your journey takes you from the forgotten catacombs beneath the subway to the desolate wastelands above, where your actions will determine the fate of mankind. But what if the real threat comes from within?

Metro 2033 Redux is the definitive version of the cult classic Metro 2033, rebuilt in the latest and greatest iteration of the 4A Engine for Next Gen. Fans of the original game will find the unique world of Metro transformed with incredible lighting, physics and dynamic weather effects. Newcomers will get the chance to experience one of the finest story-driven shooters of all time; an epic adventure combining gripping survival horror, exploration and tactical combat and stealth.

All the gameplay improvements and features from the acclaimed sequel Metro: Last Light have been transferred to Metro 2033 Redux – superior AI, controls, animation, weapon handling and many more – to create a thrilling experience for newcomers and veterans alike. With two unique play-styles, and the legendary Ranger Mode included, Metro 2033 Redux offers hours of AAA gameplay for an incredible price.

3.5 out of 5 stars
3.5 out of 5
17 customer ratings
How does Amazon calculate star ratings?
Amazon calculates a product’s star ratings based on a machine learned model instead of a raw data average. The model takes into account factors including the age of a rating, whether the ratings are from verified purchasers, and factors that establish reviewer trustworthiness.
Top reviews

Andrés Jr. Sosa Dinguis
4.0 out of 5 stars If you love Fallout you will love this game :)
Reviewed in the United States on September 1, 2017
Verified Purchase
First time playing Metro, and I have to be honest and say, the game is quite addictive. Storyline wise is good, not great but good same thing goes for voice acting. (I think some of the dialogues can get quite long and annoying)

The gameplay however makes up for it big time. Monsters are pretty ugly and they can attack like a pack of wolfs.

The type of guns are awesome and you can customize them as well.

Something I love about this game, is the fact you can interact with your environment. You can turn on and off the light switch of your lamp, you can play the strings of your guitar, and among other things. Yeah I know, is not a "omg wow" factor, but I love those little details.

Graphics are awesome not much else I can say when it comes to graphics.

Considering my beast of a computer, I did encountered some fps drops.

Nothing breath taking and I assure you, you will still enjoy this game. Those fps drops happened in the beggining of the game. I played 2 hrs straight after that, and havent noticed anymore fps drops.....yet

If you're curious the file size of this game is 6.3gb :)
Read more
Helpful
Comment Report abuse

Thedudeman777
4.0 out of 5 stars Hmm
Reviewed in the United States on August 20, 2015
Verified Purchase
Having trouble getting it to run smoothly even with the monster machine I've built.

Unsure if it is driver related as I benchmark in Fire Strike, Fire Strike Extreme, and Fire Strike Ultra all three in the top 1%.
Read more
Helpful
Comment Report abuse

J. Hehl
5.0 out of 5 stars The Definitive Edition
Reviewed in the United States on May 19, 2015
Verified Purchase
This update of the original game is the must have version now. With Improved Graphics, Lighting, Animations, and a large number of system tweaks, it is THE game to play.
Read more
Helpful
Comment Report abuse

Vermonter
3.0 out of 5 stars Three Stars
Reviewed in the United States on June 5, 2016
Verified Purchase
It is Ok, but didn't live up to my expectations given the other reviews I read.
Read more
Helpful
Comment Report abuse

William G. Hartwell
1.0 out of 5 stars If you use Windows 8, DO NOT BUY
Reviewed in the United States on April 23, 2015
Verified Purchase
The game DOES NOT RUN on Windows 8. Period. Crash to desktop on launch, every time.
Read more
One person found this helpful
Helpful
Comment Report abuse

Amazon Customer
1.0 out of 5 stars Don't get
Reviewed in the United States on July 13, 2016
Verified Purchase
My computer didn't run it well but I didn't like the story line or gameplay and its seemed to dull and had no edge to it
Read more
Helpful
Comment Report abuse

Error55o
5.0 out of 5 stars epic
Reviewed in the United Kingdom on October 4, 2018
Verified Purchase
loved this game too much
Read more
Helpful
Sending feedback...
Thank you for your feedback.
Sorry, we failed to record your vote. Please try again
Report abuse

Davidrichards27
4.0 out of 5 stars happy times
Reviewed in the United Kingdom on September 24, 2017
Verified Purchase
My son thought it was a great game
Read more
Helpful
Sending feedback...
Thank you for your feedback.
Sorry, we failed to record your vote. Please try again
Report abuse

See all reviews from the United States
Pages with related products. See and discover other items: computer animation software