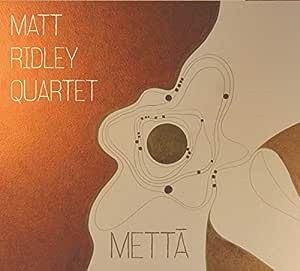 Following up his debut release on Whirlwind ('Thymos', 2013), 'Metta' finds British double bassist and composer Matt Ridley progressing his shared creativity again with his quartet of pianist John Turville, drummer George Hart, and soprano saxophonist Jason Yarde. Captured within a single day, this is a studio recording brimming with passion and spontaneity. Matt Ridley describes his quartet's offering as "considered, composed/improvised music which might transport and entertain both listeners and players, creating and involving all in an awareness of the present - that's something I feel strongly about." The immersive experience of these fifty-or-so minutes suggests that intention is excitingly on-track. The seven extended originals of 'Mett' arise from an almost strategic, compositional plan which inspires engaging extemporisation from all players. Removed from any notion of a conventional head/solo approach, Ridley's musical landscape is one of focused rhythmic, chordal and improvisational invention which can both challenge and delight - as in storytelling opener "Music to Drive Home To", whose steady, end-of-day journeying, led by Jason Yarde's colourful soprano dialogue and John Turville's spangled ostinati, is punctuated by unpredictable pauses. Personnel: Matt Ridley (double bass), Jason Yarde (soprano saxophone), John Turville (piano), George Hart (drums)

Malvin
VINE VOICE
5.0 out of 5 stars An original, captivating and spellbinding jazz recording
Reviewed in the United States on March 15, 2016
Verified Purchase
To my ears, “Mettã” by Matt Ridley is one of the most original, captivating and spellbinding jazz recordings in recent memory. “Mettã” is the follow up to Ridley’s brilliant debut “Thymos”, both of which are from the excellent U.K. jazz label, Whirlwind Recordings. Anyone interested in music that is full of creativity, passion and artistry should give this great recording a listen.

On “Thymos”, Ridley’s straight-ahead acoustic jazz arrangements were set side-by-side with other songs that featured Middle Eastern instruments. The result was a rich tapestry of sounds, textures and tones that deservedly brought Ridley to the attention of many. Yet, I think it’s fair to say that “Mettã” represents a significant breakthrough in Ridley’s artistry.

The quartet consists of Ridley on bass, John Turville on piano, George Hart on drums and Jason Yarde on soprano saxophone. The all-acoustic lineup excels in bringing Ridley’s Buddhist-inspired vision to life. The music unfolds rhythmically, lyrically and organically, taking unexpected twists and turns that always keeps things fresh and interesting; especially with repeated listens. Suffice to say that “Mettã” succeeds in freeing the mind, body and soul through its highly inventive compositions, performances and arrangements.

I highly recommend “Mettã” to everyone.