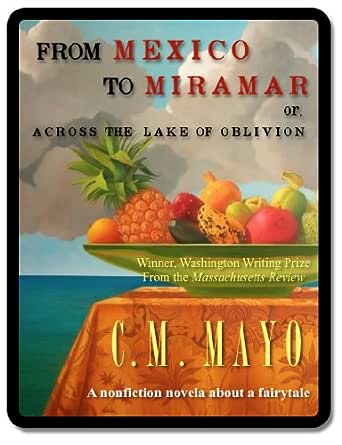 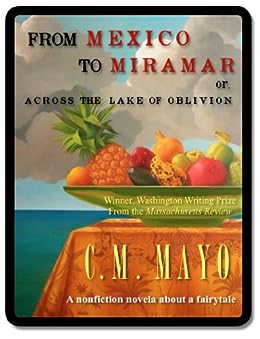 From Mexico to Miramar or, Across the Lake of Oblivion: A Nonfiction Novela about a Fairlytale: A Visit to the Emperor of Mexico's Italian Castle Kindle Edition

4.1 out of 5 stars
4.1 out of 5
8 global ratings
How are ratings calculated?
To calculate the overall star rating and percentage breakdown by star, we don’t use a simple average. Instead, our system considers things like how recent a review is and if the reviewer bought the item on Amazon. It also analyzes reviews to verify trustworthiness.
Top reviews

DMM
5.0 out of 5 stars Entertaining, good short story about the life of an Emperor
Reviewed in the United States on November 25, 2012
Verified Purchase
C.M. Mayo describes in this book her journey to know one of the most interesting figures of the Mexican History,
the Emperor Maximilian Von Habsburg. This book does not have so many pages, but it has enough to tell the
story in detail, it is friendly and one gets a delightful taste of the account of a very knowledgeable author.

Being American the author sometimes feels intrigued how should a Mexican feel about the memories of a man
who is sometimes portrayed by the World History as a martyr and some others like a tyrant.

In order to complete this work the author traveled to Italy to the Miramar's Castle, to Chapultepec's Castle in
Mexico City and to Casa Borda in Cuernavaca Mexico, which were the three main mansions of the monarch.
Throughout the pages of the book, she mentions so many different authors she studied that one gets enriched
and pointed to the right direction if one wants to know more about the subject.

This book was written with a personal-approach, it's like if a friend was telling you her personal confidences,
what she had to go through to know more about a complicated figure like Maximilian. A statesman who could
support the causes of the poor but at the same time waste money in a very obscene way through parties and
luxuries in a very royal manner.

Indeed those times were difficult for the young Mexican state: Antonio Lopez de Santa Anna, the emperor
Agustin de Iturbide and so many others and among them in this mosaic of surreal personages appears
Maximilian Von Habsburg an European monarch that tried to fit into the Mexican soul without any success.

"Mexicans! I die in a just cause... the independence and liberty of Mexico. May my blood be the last to flow for
the good of this land. Viva Mexico!"

This story happened, it is part of the scars of a Nation that had to suffer its adolescence, interventions and
moments of glory. C.M. Mayo an American author that portrays with maturity this link between Miramar and
Mexico, the Viceroy and the Emperor, she opens her soul and offers the reader another perspective about
this episode of mystery in the Mexican History.

Not much has been told about Miramar's Castle and C.M. Mayo through the pages of this book takes us there
to take a walk through the hallways of that magnificent edification.

Jose Casas Sanchez
5.0 out of 5 stars A very well done research trip by someone that has the talent to write.
Reviewed in the United States on May 19, 2014
Verified Purchase
I do admire Ms. Mayo and her talent, I belive that she has done a fantastic research, to have written her first historical novel, I am referring to the <Last Prince of the Mexican Empire>. That has been a sucess, lAbout her last work, <From Mexico to Miramar>, the only thing that I regret is that it is far too short...

I Think that she might be preparing a new historical novel about the episode in Mexican history, when there was a well intetioned man that sacrificed his way of living and his own life life for his new country, this piece of our history is quite badly understood and unkown by most mexicans, including her husbad <A>...

Jack Alan Robbins
4.0 out of 5 stars Very Good Travel Essay
Reviewed in the United States on August 16, 2014
Verified Purchase
Author wrote historical novel of Mexico that I have not read. This is a short piece more in the manner of a travel essay of places referred to in her novel. Very well done. She has also written the definitive book on travelling Baja California and the Sea of Cortes. It is a great reading experience!
Read more
One person found this helpful
Helpful
Comment Report abuse

Manuel Suarez-Mier
5.0 out of 5 stars Great little jewel
Reviewed in the United States on May 31, 2015
Verified Purchase
Excellent personal story of a trip to Miramar Castle, a perfect and useful complement to her's The Last Prince of the Mexican Empire. It is the ideal guide for a forthcoming trip to visit Miramar!
Manuel Suarez-Mier
Read more
2 people found this helpful
Helpful
Comment Report abuse

Stephen P. Miller
5.0 out of 5 stars Don't miss this one
Reviewed in the United States on March 9, 2013
Verified Purchase
This is a very brief but delightful and personal introduction to the story of Maximilian and Carlotta of Mexico, through the eyes of an author beginning to approach the topic. Readers are always curious about how authors first start on a new book, but rarely get a chance to find out. The scenes in the National Palace in Mexico City and the Miramar in Trieste reveal a wicked sense of humor.
Read more
2 people found this helpful
Helpful
Comment Report abuse

Ricardo Yglesias
4.0 out of 5 stars Four Stars
Reviewed in the United States on April 9, 2015
Verified Purchase
AN INTERESTING ACCOUNT OF A SEARCH INTO HISTORY
Read more
One person found this helpful
Helpful
Comment Report abuse

H. von Feilitzsch
5.0 out of 5 stars An Escape into Times Past
Reviewed in the United States on November 4, 2013
For anyone who has read The Last Prince of the Mexican Empire, you cannot miss this! Wrapped in beautiful prose and backed by the professionalism of an accomplished historical scholar, Catherine Mayo gives you the gift of a journey you do not want to end. Really! I was sad when the book ended. With incredible skill, Mayo takes you by the hand and travels with you to the place where the future emperor of Mexico, Maximilian I grew up, married, and partied. As you join the author on a virtual tour of Italian architecture, 19th century life, and politics, you feel right at home in a place removed through space and time. You begin to understand a man whose life ended in tragedy and who history has treated with disrespect, scorn, or indifference. One of the most magical historical non-fiction works I have ever had the pleasure of coming across!
Read more
One person found this helpful
Helpful
Comment Report abuse
See all reviews