The Meyersons of Meryton and millions of other books are available for Amazon Kindle. Learn more 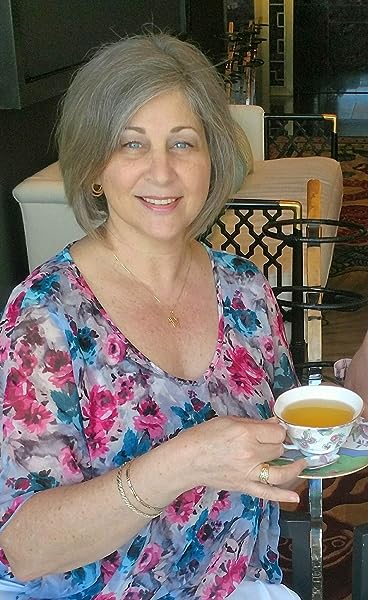 The Meyersons of Meryton Paperback – April 2, 2019

by Mirta Ines Trupp (Author)
4.3 out of 5 stars 42 ratings
See all formats and editions
Sorry, there was a problem loading this page. Try again.

J.A.F.F.- Jane Austen Book Awards
Flurry and panic of an imminent double wedding at the Bennet household is apparent throughout this novel. Essentially it's a "mid-themed" Pride & Prejudice Variation. While the Bennet family, Mr Charles Bingley, and Mr Fitzwilliam Darcy provide a familial feel to this novel, Rabbi Meyerson and his family bring to light a Jewish community within Meryton. Mrs Bennet and her daughters unfamiliar with the Jewish faith are as intrigued as they are baffled by it. With alacrity Miss Mary Bennet embraces the mayhem all around, rather pleased her many seeming faults are less noticeable.
In the meanwhile Mr Bennet discovers he and the Rabbi have a deal in common. Their covert observations, however, are not without risk. Unfortunately the pickle the two elders fall into requires an intrepid hero. Mr Darcy is therefore the man of the moment, and Mr Wickham is involved in the dark mix.
The novel has amusing asides and a literary touch to the prose. For the uninitiated there is a great deal of enlightenment to the Jewish faith in all its facets, and the Jane Austen Award is hereby granted to Mirta Ines Trupp for "The Meyersons of Meryton."
Start reading The Meyersons of Meryton on your Kindle in under a minute.

4.3 out of 5 stars
4.3 out of 5
42 global ratings
How are ratings calculated?
To calculate the overall star rating and percentage breakdown by star, we don’t use a simple average. Instead, our system considers things like how recent a review is and if the reviewer bought the item on Amazon. It also analyzes reviews to verify trustworthiness.

Sophia Rose
VINE VOICE
4.0 out of 5 stars Jewish Tradition Meets Austen's Classic for a heartwarming historical Romantic Suspense
Reviewed in the United States on June 11, 2021
Verified Purchase
What if a Jewish family on a mysterious errand comes to Meryton shortly before the two oldest Bennet sisters make their way to the altar? An intriguing variation tale that slips in late in Jane Austen's original P&P story and gives the reader of Jewish life during the time of the Regency and an additional twist to the story for Austen's beloved characters.

Elizabeth Bennet is primed to enter matrimony with handsome and wealthy Fitzwilliam Darcy as her oldest sister, Jane is to join her for a double ceremony with Charles Bingley. As they attempt to stem their mother's fretful focus on having a lavish wedding, their father announces a family who are friendly with their Gardiner relations are moving to Meryton and need to stay with them a night or so while their housing situation is finished being put in order.

Imagine their surprise when the Meyersons turn out to be a Jewish family and Jacob Meyerson is a Rabbi. But, that isn't all he is. Between introducing themselves and their religion and culture, Jacob meets with Mr. Bennet to share his secret reason for arriving in Meryton. Both men clandestinely work for the Crown in the war effort. It seems some of the Jewish gold destined to provision and pay Wellington's troops has gone astray and forged coins had replaced it. The counterfeiting operation was traced as far as Meryton.

Meanwhile, Elizabeth begins to have more than pre-wedding jitters. She is doubting the compatibility of she and Mr. Darcy. Mary is intrigued by the new arrivals and is challenged to step out of the shadows while Kitty is determined to lose her silliness. The arrival of the Wickhams really sets the Bennet household on it's ear. When the counterfeiting investigation takes a dangerous turn, everyone is forced to take stock of their situation and some are called to action.

I've been meaning to read this book since I heard about it. I was curious about the blend of Jewish cultural history with the classic story as told by an author with just such a heritage and love for Austen. I enjoyed learning more about the Jewish faith, history in England, and way of life and, particularly, in a Rabbi's household. There are explanations and religious discussions throughout the story.

The story does jump in very late in the Pride & Prejudice timeline so would best be appreciated by those who had read it or at least watched one of the film adaptions through to the end. That said, it wouldn't be completely impossible for a reader unfamiliar with the Austen tale to pick it up if one doesn't mind the sensation of a lot coming before the opening of this story.

In addition, there is the fun suspense element that got exciting and led to a surprising adventure for a certain library-bound character.

Alongside these other elements, the author pursues a bit of a twist in Darcy and Elizabeth's love story and offers a slightly different view of the Bennets that I enjoyed especially what was done with Lydia's character and Elizabeth's perception. There are some warm, emotional friendships formed like that of Mrs. Bennet and Mrs. Meyerson that added a lovely extra piece to the story. All these variations made for a unique and fresh storyline that I appreciated.

All in all, I was well-satisfied with this variation, the characters, the backdrop and the plot. It had good pacing and developing though the end did rush a bit. There is a strong spiritual element that suited the story organically and some lovely family, friends, and romantic moments. Might not be for all Austenesque fans, but I can recommend it heartily to those who like the sound of what I've described.
Read more
Helpful
Report abuse

Ria
VINE VOICE
2.0 out of 5 stars Not what I hoped it would be
Reviewed in the United States on May 30, 2020
Verified Purchase
I really wanted to like this book more than I did so it was disappointing that I didn't. There were just too many things I didn't care for. First the writing style was not to my taste and was made worse by frequently taking phrases directly from Austen's writings and not just from P&P. They really stuck out.
I didn't buy Lizzy's insecurities she developed along the way. It just didn't feel like Lizzy. I think the author was trying to provide a conflict for their relationship but it felt contrived. And having the wedding postponed for Mr. Bennet's departure could have been the conflict in the romance on its own.
I wasn't really sure what the goal of the book was. It was part romance, part intrigue, part religion manual. The idea of having a different religion, in this case Jewish, become a major player in Meryton was intriguing and definitely different from any other Jaff I've read. Points for originality. And it was likely that the Bennets would know little of that faith and need much explanation but every time we got Jewish belief involved in the text, the pacing of the story slowed way down. I felt like much of the book just dragged because of it. The story stopped and the manual stepped in.
I didn't really buy Mr. Bennet's part in the intrigue either. It seemed too out of character for him.
I liked the growth that we saw in Mrs. Bennet and Kitty. They did not end the same people as they were at the beginning of the book. Both showed thought, kindness, acceptance and tolerance. Definitely thinking beyond themselves.
I think my favorite part of the book was Mr. Meyerson's talk with Mr. Bennet about his marriage. Mrs. Bennet had done her part but had Mr. Bennet done his? It was actually something to be mulled over in every relationship.
I wonder what Wickham would have done had the scheme not been interrupted. Would he have done something to save Mr. Bennet? He is Wickham's father in law afterall...

Sex: a lot of talk about the marriage bed. Out of character for an Austen continuation.
Language: Deity
Violence: yes, some
Read more
Helpful
Report abuse
See all reviews

Marie
4.0 out of 5 stars Good Read
Reviewed in Canada on August 28, 2020
Verified Purchase
A well-written story about a Jewish family’s move to Meryton to set up a local Jewish congregation—but is that all there is to it? A mystery also unfolds as the story is told. It’s also a story about how people of differing faiths come together in friendship and learn a lesson of trust.
Read more
Report abuse
See all reviews
Back to top
Get to Know Us
Make Money with Us
Amazon Payment Products
Let Us Help You
EnglishChoose a language for shopping. United StatesChoose a country/region for shopping.
© 1996-2021, Amazon.com, Inc. or its affiliates