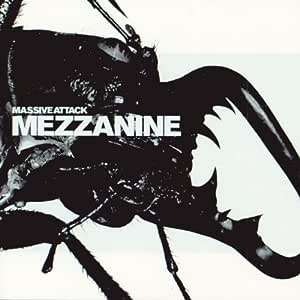 Save with Used - Very Good
$23.81
Ships from: Amazon
Sold by: Amazon Warehouse

Massive Attack Format: Vinyl
4.7 out of 5 stars 1,295 ratings
See all 14 formats and editions Hide other formats and editions
Includes FREE MP3 version of this album.&nbspProvided by Amazon Digital Services LLC. Terms and Conditions. Does not apply to gift orders.&nbspComplete your purchase to save the MP3 version to your music library.
Available at a lower price from other sellers that may not offer free Prime shipping.

After a long hiatus, Massive Attack returned in 1998 with Mezzanine, a record announcing not only that the group was back, but that they can create a masterpiece as good as their debut. Here Massive Attack recruit a live band, while maintaining their trademark downtempo sound. Tracks like Angel, feature stark production accompanied by Horace Andy's beautiful vocal. Teardrop featuring Elizabeth Fraser of Cocteau Twins, brings a new life and emotion to their trip hop sound. Pressed on 180G vinyl.

4.7 out of 5 stars
4.7 out of 5
1,295 global ratings
How are ratings calculated?
To calculate the overall star rating and percentage breakdown by star, we don’t use a simple average. Instead, our system considers things like how recent a review is and if the reviewer bought the item on Amazon. It also analyzes reviews to verify trustworthiness.
Top reviews

l'humaniste
5.0 out of 5 stars Sheer one of a kind Genius!!!!!
Reviewed in the United States on June 28, 2004
Verified Purchase
This CD speaks for itself. I have listened to their other albums, and own 100th Window, but nothing compares to the musical genius of "Mezzanine". Whilst electronica, it is one of the very very few electronica, trip-hop bands where I am not constantly reminded of synthetic sounds. Richly varied in percussive qualities, with voice and other sounds blended so seamlessly, this album transports the listener onto into a quasi transcendental plane. Now that might sound corny, but there's no other way to put it.
For months I couldn't get through a day without playing this album at least once or twice. Now, i come back to it, and it sounds new again. Beautifully rich and dark. The voices never seem to interfere with the mood, rather they become fused with it perfectly--the percussion and varied sounds, never the "thump-thump" of dancey trancy crap.
I cannot wait for Massive Attack's next album release. I hope they return to this level again: because it was lost a bit in 100th Window. Sinead O'Connors political content loaded lyrics on the Irish-English conflict totally overshadowed the musical gift of Massive Attack. The MOOD is enough to convey that and more to listeners without creating narrow, literal channels of interpretation and storytelling. The track Antistar on 100th was the strength being revealed, but still couldn't shine with the magic of Mezzanine. Storytelling/literal political agendas are not what Massive Attack's strength is: Stick with your strength: It's Mezzanine. It's ALL there. the MUSIC.
This is by far one of the best albums in history, in my honest opinion. No one else has come so close, so completely, on an entire album.

Jamie
5.0 out of 5 stars It will change your life
Reviewed in the United States on March 14, 2019
Verified Purchase
A classic masterpiece of cool chill with rock accents. When you want to push your HiFi to the limits crank this up and revel in it's beauty.
Read more
2 people found this helpful
Helpful
Comment Report abuse

S. Schell
VINE VOICE
4.0 out of 5 stars Melodious Macabre
Reviewed in the United States on May 29, 2000
Verified Purchase
This album is a lot more dark and mysterious than their two previous releases, and I'm more attracted to this kind of sound that what they've produced in the past. Don't get me wrong, I love "Unfinished Sympathy" and the cool vibes of their ballad "Protection", but something about the creepy mystique of "Mezzanine" makes me want to listen more closely to the slow, synthesized harmonies and sledgehammer beats. It has the flair of an understated party filled with second-hand smoke and empty martini glasses.
It's cool and mellow with the expected sensual ballads that Massive Attack produces with the greatest of ease, but there's a blend of new voices, including Elizabeth Fraser from the techno-pop group Cocteau Twins.
There are notable selections on this CD that will stick with you the first time you listen to them. First and foremost, the sultry tune titled "Teardrop", Elizabeth Fraser leading the way with her whispery, nymph-like vocals. Then there's the laid-back instrumental "Exchange", a electronic martini for the soul with a cut from an old Isaac Hayes tune. You lay back and literally "chill" when you listen to this tune. The brief reprisal at the end features Robert Del Naja's nasal chords and jagged vibrato, the perfect compliment to the heavy bass and whirling synthesizers. This is a highly recommended album, even for skeptical MA fans. And for those that have listened already, give it another shot. It will grow on you.

Lisa2900
5.0 out of 5 stars Never gets old, MA at their best!
Reviewed in the United States on May 1, 2013
Verified Purchase
Massive Attack is by and far my favorite band, and I enjoy all types of music, not just of the trip-hop genre. I only came across them 2 yrs ago and have been addicted to them ever since. My favorite album is Mezzanine but I can honestly say that I love each and every song they ever produced. Personal favorites are "Angel", "Inertia Creeps," "Mezzanine", "Dissolved Girl", "Black Milk", "Heat Miser," "Safe From Harm", "Daydreaming", "Blue Lines","Live with Me," "Special Cases,", and the list just keeps going on and on from there. I've been listening to their Collected Album for the past year in my car and I'm still not sick of it. Their music is simply undescribable and incredibly original. Robert "3D" Del Naja's voice is sensational, incredibly sexy and can't be compared to anyone else. Check out the track "Inertia Creeps" on the Mezzanine album and you'll get a sense of what I'm talking about. Also their collaborations with various lead vocalists are simply awesome and smart, and there are many out there. While some of their songs may be considered "darker" than others, I have to say that all of their music puts me in a great mood, pumps me up and also helps me relax. Their most recent album Heligoland is definitely much different then their prior albums (but then again all MA albums are different; why I love them so much), and it took a little while getting used to. But after listening to it for a bit I became addicted to that album as well. The only album I don't have is Blue Lines, which I just purchased, al though I'm familiar with all the tracks on the album. Bottom-line is Massive Attack is amazing and in my opinion so highly under-rated here in the states. You will never find another band out there quite like Massive Attack. Their sound is so unique and versatile and can't be compared to other bands that share the trip-hop genre, such as Portishead, Morcheeba, Tricky, etc,. Don't get me wrong I'm a fan of these groups as well but their music is no where near as powerful and intense as Massive Attack (in my opinion). I recommmend any and all of MA's albums to anyone who enjoys refreshing, original music, and music that can't be categorized as falling into one particular genre, but rather an incredible blend of trip hop, alternative hip hop, experimental rock, down-tempo hip-hop, soul, reggae, even classical music.

Ok so if you're not familiar with MA's music you are seriously missing out, so I highly recommend that you expose yourself to them already; I guarantee you will not be dissapointed. I suggest you start out with their Collected Album as the compilation will give you an overall sense of their sound; if not that album you can't go wrong with Mezzanine, it's their best!

ClifB
5.0 out of 5 stars One of my top ten albums of all time
Reviewed in the United Kingdom on February 15, 2019
Verified Purchase
I already have the 1998 release version of this masterpiece of an album but have been trying other releases to find the holy grail of pressing quality. 2013 190g is "the one" apparently!

This 2017 version definitely sounds slightly different to the original, having slightly deeper, but perhaps looser dub bass and perhaps a little less slam to drums.

It plays quietly and smoothly with little surface noise, so sounds a little more refined than the original.

hammu
5.0 out of 5 stars Vinyl
Reviewed in the United Kingdom on July 2, 2020
Verified Purchase
Great record, sounds fantastic on vinyl, only gripe is Teardrop at the end of a side, meaning inner groove distortion even with a very decent stylus, it's already a very complex track....if you're wondering how it compares to the CD I would say how badly do you want to hear Teardrop? If that's why you're buying the album, get the CD..
Read more
Report abuse

Kindle Customer
5.0 out of 5 stars Sound on this vinyl is great
Reviewed in the United Kingdom on June 5, 2020
Verified Purchase
Sound quality is excellent deep bass and well recorded good system test. Cover is single sleeve , would have preferred a double as this is spread over two records But inner sleeves have all the info on. Can’t make my mind up if CD sounds better than the vinyl so it must be close, sounds great on either.
Read more
Report abuse

Peter D Tann
5.0 out of 5 stars Vinyl over cd
Reviewed in the United Kingdom on August 15, 2017
Verified Purchase
Vinyl sounding better than the cd I've had since the 90's. Dark and deep Add this to any collection,
Read more
5 people found this helpful
Report abuse

Faux
5.0 out of 5 stars My Favourite Album of All Time!
Reviewed in the United Kingdom on April 25, 2015
Verified Purchase
Massive Attack are one of my favourite groups and this IMO is their best album and sits at the top of my top ten albums of all time. I have wanted this on vinyl for a long time and have struggled to get a copy for a few years now. This is good quality and plays brilliantly. It was expensive for a double album and I would not normally pay this price but now I have it I feel it was worth it. This will be played and played.
Read more
3 people found this helpful
Report abuse
See all reviews