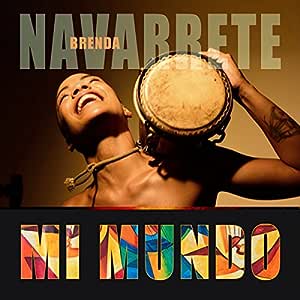 Secure transaction
Your transaction is secure
We work hard to protect your security and privacy. Our payment security system encrypts your information during transmission. We don’t share your credit card details with third-party sellers, and we don’t sell your information to others. Learn more
Details
Ships from
Amazon.com
Sold by
Amazon.com
Return policy: This item is returnable
In most cases, items shipped from Amazon.com may be returned for a full refund.
Read full return policy
Mi Mundo has been added to your Cart
New & Used (10) from
$15.95 & FREE Shipping on orders over $25.00

Mi Mundo introduces a shining new star on the world music firmament. This is the solo debut of Brenda Navarrete, a Cuban-based singer, songwriter, percussionist and bandleader of rare skill and musical originality.

The stylistically eclectic album features a variety of group settings, with the primary instruments consisting of drums, piano, electric bass and percussion, including bata and congas played by Navarrete.

Brenda's warm and fluent voice and songwriting ability that take center stage on Mi Mundo. A genuine highlight on an album devoid of low lights, A Ochun is a dynamic and delightful treat that begins with percussion and call and response vocals, which then fade away in favor of gentle piano and flute stylings. When I was a little girl, my sister and I loved to listen to jazz greats like Sarah Vaughan, Ella Fitzgerald and Billie Holiday. I also gravitated to artists like Nat King Cole, John Coltrane, Bobby McFerrin, Miles Davis, Yellow Jackets and Cassandra Wilson, but also BoyzII Men and Take 6. My home environment also featured music from great Cuban artists like Cecilia Cruz, Benny More and Celeste Mendoza. All those artists and musical styles have contributed to my musical growth since I was a child. I adore Cuban music, and mixing all of those styles together with traditional Cuban music is powerful and exhilarating. An example of this original and compelling fusion is Caravana, Brenda's distinctive take on the Duke Ellington classic Caravan.

Brenda Navarrete's focus is now firmly set on Mi Mundo. This beautiful expression of her musical universe is now going out into the world, and it deserves your close attention.

A bright new Cuban star has emerged on the world music scene, and she is a young singer/percussionist named Brenda Navarrete. Her sparkling new album Mi Mundo has just been released by the Canadian Alma Records label. A classically-trained percussionist from Havana, Navarrete grew up in a very musical environment and she counts among her influences a wide range of artists from Coltrane, Ella, and Billie, to Boyz II Men and Take 6. The family record player also featured plenty of Celia Cruz, Beny Moré, and Celeste Mendoza.

Navarrete trained at the Amadeo Roldán Music Conservatory in Havana, where she studied symphonic and Cuban percussion as well as piano. In 2010, she won a national competition at Cuba's prestigious Fiesta del Tambor, taking first prize in the batá drum category. She had learned Cuban batá, the folkloric two-headed drum used in Santeria rituals, mostly from hearing it from bands on the street (and I also suspect from listening to Los Papines and Los Muñequitos de Matanzas). And although she has a beautiful voice, precise intonation and phrasing, Navarrete confesses to having no formal vocal training at all.

M.M.
5.0 out of 5 stars Five Stars
Reviewed in Canada on June 29, 2018
Verified Purchase
I'm only disappointed that Brenda Navarrete hasn't yet released a second c.d. She is a major talent.
Read more
Report abuse
See all reviews
Back to top
Get to Know Us
Make Money with Us
Amazon Payment Products
Let Us Help You
EnglishChoose a language for shopping. United StatesChoose a country/region for shopping.
© 1996-2021, Amazon.com, Inc. or its affiliates