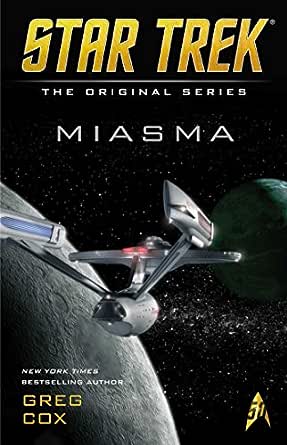 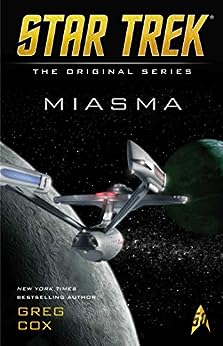 Greg Cox is the New York Times bestselling author of numerous Star Trek novels and short stories. He has also written the official movie novelizations of War for the Planet of the Apes, Godzilla, Man of Steel, The Dark Knight Rises, Daredevil, Ghost Rider, and the first three Underworld movies, as well as books and stories based on such popular series as Alias, Buffy the Vampire Slayer, CSI, Farscape, The 4400, Leverage, The Librarians, Roswell, Terminator, Warehouse 13, Xena: Warrior Princess, and Zorro. He has received three Scribe Awards from the International Association of Media Tie-In Writers, as well as the Faust Award for Life Achievement. He lives in Lancaster, Pennsylvania. Visit him at GregCox-Author.com.  --This text refers to an alternate kindle_edition edition.

4.0 out of 5 stars
4 out of 5
86 global ratings
How are ratings calculated?
To calculate the overall star rating and percentage breakdown by star, we don’t use a simple average. Instead, our system considers things like how recent a review is and if the reviewer bought the item on Amazon. It also analyzes reviews to verify trustworthiness.
Top reviews

Jason A. Miller
3.0 out of 5 stars Going, but not boldly
Reviewed in the United States on August 10, 2016
Verified Purchase
I wanted to like "Miasma" more than I did. I was introduced to Trek largely through "The Wrath of Khan", so, on its surface, this book -- set in between the 4th & 5th movies, with Lt. Saavik still a member of the Enterprise-A bridge crew -- should have been a winner, featuring as it does my favorite cast.

However, excepting Saavik, this really plays out like a Season 3 episode of the original series, circa 1969. The story is set in motion when Captain Kirk diverts the Enterprise away from a diplomatic mission (featuring more of the aliens last seen in "Elaan of Troyius"), in order to chase down a mysterious signal. The ship winds up off course, circling a planet full of deadly horrors. Most of the story features the "away team" (Spock, McCoy, Chekov, and three red-shirts -- who are each given names, but it doesn't matter) who are plunged into deadly danger after deadly danger (I'll leave it to you to guess who survives), with Kirk not really getting anything heroic to do until the final act.

I say "final act" advisedly; this short novel could easily have been adapted into a 45-minute script, with a faintly ludicrous ending. What turns the bare-bones story into a proper novel are three things: 1) the continuity references; author Greg Cox doesn't miss too many opportunities to mention beloved alien species, fictional chemicals or minerals, or popular lines of dialogue from the original series (the improbable line "Well, I'll be a Mugato's uncle" is delivered at a particularly climactic moment); 2) another chance to explore the relationship between Spock and Saavik, which kind of dead-ended in the movies after Saavik was replaced with Valeris in Star Trek 6; and 3) a chance to imbue the crew with emotions that they often weren't allowed to express on TV. This latter bit works sometimes, but not always; the three leads get a lot to do, as does Saavik, but the others barely feature. Chekov gets a lot of dialogue, but none of that dialogue sounds remotely like the lines that Walter Koenig was given on TV almost 50 years ago.

So this is Trek's 50th anniversary year, and "Miasma" is not a bad way to spend 45 minutes of your time. However, the definite ST:TOS episode, this is definitely not. It plays out like a fair-to-middling TV episode from early 1969 rather than a movie adventure from 1985.

Kindle Customer
2.0 out of 5 stars Please don't make Spock look like an idiot, Mr Cox!
Reviewed in the United States on July 27, 2017
Verified Purchase
Greg Cox is usually better than this - and how it slipped by the editors at Simon & Schuster amazes me: "The water was unpleasantly cool but not freezing. Spock estimated the temperature to be approximately forty degrees Celsius." As someone who lives in part of the country where it gets up to 40C on a hot day (ie 104F), believe me when I say that not even a hot-blooded Vulcan would think of 40C as unpleasantly cool. I presume Cox meant 40F (about 5C) which is consistent with the description. This could be put down to a minor brain-fart, but the location is a mangrove swamp with high humidity, which you would not see in 5C weather, so the whole scenario makes no sense. After reading that line in Chapter 2, I completely fell out of the 'willing suspension of disbelief' and got little pleasure from the rest of the book. Shame on you both, Cox and Simon & Schuster.
Read more
2 people found this helpful
Helpful
Report abuse

James R. Mullins
4.0 out of 5 stars A nice little story featuring old friends.
Reviewed in the United States on May 5, 2016
Verified Purchase
It has been a long time since I read a Star Trek novel. During my youth, books about the adventures of Captains Kirk and Picard filled many a rainy afternoon. These continuing stories outside of the realm TV and movies helped to feed my hunger for Star Trek. I came across Miasma randomly on Amazon. The idea of a shorter Star Trek Novel intrigued me. Especially since I have not read science fiction in a long time. The story gripped me immediately with the Mr. Cox’s interpretation of a strange new world. Though also rife with the familiar story elements of Star Trek the novel as a whole was a compelling read. The shorter format echoed of those original series episodes that were made so along ago. For a few hours the years dropped away and I was that boy again enjoying tales of adventure where no person had gone before.
Read more
2 people found this helpful
Helpful
Report abuse

Tiberius
4.0 out of 5 stars This felt like Trek
Reviewed in the United States on June 14, 2016
Verified Purchase
It's been a while since I've read a "professional" Star Trek novel that actually grabbed me. I have a few that I bought, started but never finished reading. Miasma was good. I enjoyed it. I wished it were longer and more complex. However, for what is essentially a novella, I really enjoyed it. Yes, it's somewhat predictable to those of us who have read Trek novels but it wasn't flawed as some of the more recent offerings are. It felt a lot like watching an episode. And that's the way it should be. Thank you, Greg Cox. I truly enjoyed your story.
Read more
3 people found this helpful
Helpful
Report abuse

Erin Blackwell
5.0 out of 5 stars Good story for part of the 50th!
Reviewed in the United States on August 26, 2016
Verified Purchase
I wish this had been longer so we could have delved into some things deeper, but I enjoyed this more than I expected. I'm so glad to see Saavik back and this set in the movie time period. I'm thrilled Greg Cox showed growth in the characters & their relationships; his "monster" was a good scary. I had a couple small things I didn't think made sense, but they didn't hurt it. As a big fan, I'm thrilled Paramount and Greg Cox picked Saavik and S/Saa to be part of their 50th Celebration!
Read more
Helpful
Report abuse
See all reviews

Greggorio!
4.0 out of 5 stars A COMPELLING TREK READ, INDEED!!!!!!
Reviewed in Australia on June 1, 2016
Verified Purchase
THIS STORY OF the legendary crew of the equally legendary Starship Enterprise being sidetracked from a run of the mill mission of diplomacy for one of potential first contact, turned out to be a fast paced, action packed thriller. Half of the Command Crew volunteer themselves to investigate the source (and meaning) of a signal of unknown origin on a nearby class M planet, only to find themselves in a spot of bother sooner than anyone could have expected. The rescue team - led by Kirk and Saavik - jump onto the next available shuttle craft in a desperate bid to save as many of their friends as they can. The ultimate solution is highly original, and leaves the reader feeling immensely satisfied, not to mention relieved that it all turned out well.

An excellent and well deserved four stars for this excellent addition to the Star Trek Bookiverse.
Read more
Report abuse

Angelo
4.0 out of 5 stars Entretenido pero monotono - amusement with slow motion
Reviewed in Mexico on March 11, 2016
Verified Purchase
I wish I would like to read a more thrilling episode. However it was pretty good, especially when Mr. Bones got so creative to use Spock own blood as a weapon... Very creative
Read more
Report abuse