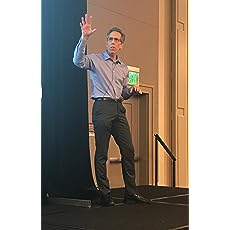 About Michael A. Raithel

Michael A. Raithel works as a senior systems analyst for the premier contract research organization in the Washington, DC area. He has programmed with SAS software on mainframe, UNIX, Linux, and Windows environments in both the commercial and government sectors since 1985. Michael is the author of more than 25 SAS technical papers and is a popular lecturer at SAS Global Forum, regional SAS conferences, and at local SAS users groups. His SAS tips thread "Chance to Make SAS-L History" is the longest-running thread on the SAS-L listserv.

Michael has been a keynote speaker at WUSS, SCSUG, PharmaSUG, and a Featured Lunchtime Speaker at SAS Global Forum. He has taught SAS classes at SUGI, SAS Global Forum, and at American University in Washington, DC. Michael has written four books published by SAS Press:

* Did You Know That? Essential Hacks for Clever SAS Programmers

* It Only Hurts When I Hit ENTER

A copy of his first book, Tuning SAS Applications in the MVS Environment, resides in the Smithsonian Institution of American History's Permanent Research Collection of Information Technology.

Michael is a lifelong gym rat and an avid runner. He has completed 11 marathons including running all six of the World Marathon Majors

He would have written a longer bio, but he had to run.
Read more 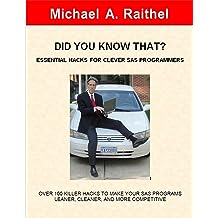 DID YOU KNOW THAT? ESSENTIAL HACKS FOR CLEVER SAS PROGRAMMERS: OVER 100 KILLER HACKS TO MAKE YOUR SAS PROGRAMS LEANER, CLEANER, AND MORE COMPETITIVE Nov 28, 2014
by Michael A. Raithel
( 3 )
$5.95
At last; the longest-running thread on the SAS-L listserv has been turned into a book!
Author Michael A. Raithel has distilled his best tips from the listserv, updated them, and added dozens of others to create the ultimate book of SAS hacks. This book is designed to help you to: add more sophistication and utility to your SAS programs; increase the breadth and scope of your SAS programming techniques; save valuable programming time; gain better insights in your data; seamlessly perform operating system functions from within SAS; create more professional-looking reports for your clients; help you to become a top SAS programmer; ...and more.
This book has nine chapters of hacks broken into the basic areas they cover: DATA step, procedures, functions and call routines, macros, and so on. Within the chapters, each hack provides a self-contained explanation of a SAS tip, technique, or clever methodology you can immediately put to use. A comprehensive index facilitates quick look-up by pointing you directly to the hack that contains the associated SAS keyword.
The short-but-potent nature of the hacks makes this book a great bedtime read, beach read, at the doctor's or dentist's office read, on the subway or bus read, or an at the airport read.
Are you ready to raise the utility and function of your already clever SAS programs? Well, then start reading this book today!
Read more 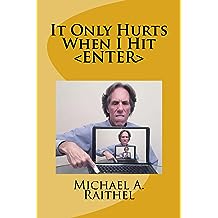 And some days you’re the zero.

But no matter what, computer programmers always do their bit.

In the real world of information technology, programmers can go from hero to zero in a nanosecond. Sometimes we are master pastry chefs, kneading, molding, and shaping fine data into intricate informational croquembouches for our clients’ consumption. But many of us work in organizations where our users, co-workers, and managers seem to be operating in states of perpetual stack overflow. So all too often, we are dung beetles—gathering, shaping, and rolling heaping piles of dirty data into balls of muck that are buried deep within corporate data stores.

This book contains 2**4 true stories about programmers, geeks, and techies who labor in that sweetest of all workplaces, the space between the keyboard and the chair. Stories about:

. . . were extracted from the author’s past, transformed into de-identifiable accounts, and loaded into this publication for your amusement.

So journey from the bowels of frigid data centers to the overcrowded cubicle farms of corporate America and meet some of the programming professionals who put their grubby, grimy, greasy fingers all over your data.
Read more
Other Formats: Paperback