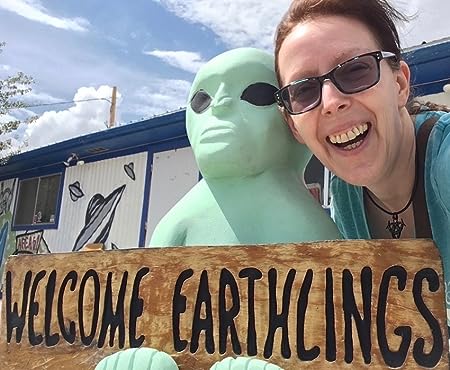 Michelle Ann King was born in East London and now lives in Essex. She has published stories of fantasy, science fiction, and horror in over ninety different magazines and anthologies, including Interzone, Strange Horizons, and Black Static.

Her favourite author is Stephen King (sadly, no relation), and she also loves zombies, Las Vegas, and good Scotch whisky.

Her first two short story collections are available in ebook and paperback from Amazon and other online retailers. See www.transientcactus.co.uk for details. 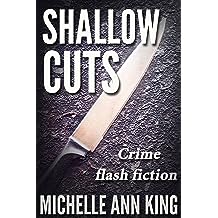 Shallow Cuts Mar 27, 2013
by Michelle Ann King
( 3 )
$1.38
SHALLOW CUTS is a collection of crime flash fiction: 20 bite-sized stories of murder and mayhem. Featuring a would-be comedienne who'll do anything to get a laugh, a fatal case of sibling rivalry, a newly-promoted gang boss who finds that life at the top isn't quite what he imagined, a young boy trying hard to live up to his father's expectations, and many more.
Read more 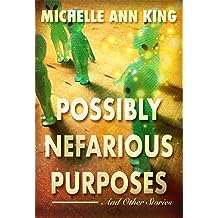 Possibly Nefarious Purposes and Other Stories May 21, 2018
by Michelle Ann King
( 1 )
$4.18
Come for Christmas dinner at the house of a little girl with very particular interests; let the residents of an old folks’ home show you how to save the world with self-hypnosis; celebrate (or mourn) the death of a supervillain; consult with Clarity, who can tell you why things happen as they do (if you really want to know); and learn how to score points for decapitation in a never-ending game of life and death.

Featuring all of the above plus protective aliens, bickering ghosts, gangster vampires, robot ninjas, and floods of man-eating hamsters, the second collection of stories from the wicked imagination of Michelle Ann King will horrify, amuse, and chill you in turn. 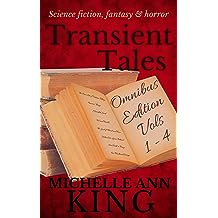 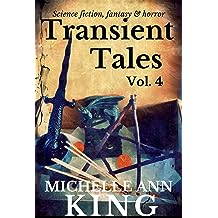 Transient Tales Volume 4 Dec 14, 2014
by Michelle Ann King
$2.99
The fourth in the Transient Tales series collects 11 short stories of science fiction, fantasy and horror, totalling 20,000 words and ranging from light to dark and all shades in-between.

Volume 4 features a life coach to the Gods, a ghost-disposal expert, a time gambler, a singing slug, a cunningly-disguised space teleport device, a girl who can eat anything, an inter-dimensional auction, a suburban demon infestation, a Garden of Eden where everyone can be God, a long-suffering Memory Transfer Manager, and a life-saving zombie.

Congratulations on Your Apotheosis
Being an all-powerful superbeing might be better than working retail, but Sharon’s still bored. All she wants is an arch-enemy, so that they can fight an epic, eternal battle across space and time. Is that so much to ask?

The Visiphorical Art
All of life is art and no one wants to die. Not even the ghosts.

You Pay Your Money and You Take Your Chance
Some people (and insurance companies) think going into the Time Pocket is reckless, but maybe it’s worth the ris.

Black Thumb
Debra thinks there’s nothing for a slug to feed on, in her blighted garden. She’s wrong.

Out Shopping in Hyperspace
It seems like Mia’s the only one who recognises her father’s genius. But she’s not giving up.

Jeanette's Feast
Gavin’s heard that cockroaches can survive anything. Maybe even his family.

Free to Loving Home (Donation Required)
Interdimensional travel can be time-consuming, physically debilitating and sometimes illegal, but the auctions at the Hugh Everett Rehoming Centre always make it worthwhile.

Not the Pizza Girl
In the battle of man’s stomach versus his immortal soul, the stomach wins every time.

Garden of Fog and Monsters
They pitch it to the volunteers as a contest that can be won, but there’s no such thing as a free paradise.

Re: Corrections to Consciousness Module 14 (Memories: Age 41-60)
Upgrade Ltd, and it’s Memory Transfer Managers, are very committed to making sure customer complaints are resolved, whatever it takes.

The World Doesn't End, Even When it Should
Since the government won’t make zombies available on the NHS, Lucy will have to make her own arrangements. 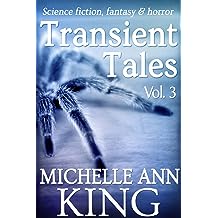 Transient Tales Volume 3 Apr 27, 2014
by Michelle Ann King
( 1 )
$2.99
The third in the Transient Tales series collects 12 short stories of science fiction, fantasy and horror, totalling 20,000 words and ranging from light to dark and all shades in-between.

Sweetie
Sweetie's changed, since the days of the travelling carnival. But she still knows how to teach an audience respect.

Wolf, or Faith in the Future
Language evolves just like everything else. There are different words, in the future. And a different definition of horror.

Never Leave Me
Katrine knows her story is supposed to end with happily ever after. But what happens after that?

The Portal to a Lost World
The phone call comes every year. 'Where are you?' Tollie asks, but she never gets an answer. She hopes she never will.

Seeing Red
Even though they're not living on Earth any more, Halden's family are still human — still the same people they ever were. Unfortunately for him.

An Object Lesson in Misanthropy
Zoe's never been able to work out what nice guy Bill sees in her bitter, reclusive mother. Today, she's going to find out.

Getting Shot in the Face Still Stings
A lot of problems can be solved with a gun. But not all.

No Past, No Future, Just Now
The world might have suddenly become a strange and confusing place for everyone else, but Louisa's used to it. She knows what to do.

Game Over
Adrian's sick of providing free entertainment for the passengers in his head. He's not going to carry on performing unless he gets something in return.

You Don't Want What I Get
Richie suspects he's being cut out of a sweet deal, and he's not happy about that. He wants his fair share, and he's going to get it.

There You Are, My Love
If Marcus sees enough clairvoyants, will one of them eventually channel his father's spirit? And is that what he really wants?

For Your Safety and Comfort, Please Keep Arms, Legs and Tentacles Inside the Car At All Times
Katie gets worried when her best friend says she's found God — especially when she realises Lia means that literally.
Read more 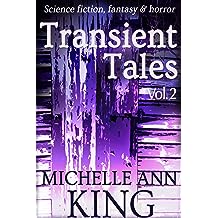 Transient Tales Volume 2 Jan 29, 2013
by Michelle Ann King
( 2 )
$2.99
The second in the Transient Tales series collects 12 short stories of science fiction, fantasy and horror, totalling 20,000 words and ranging from light to dark and all shades in-between.

Volume 2 features a Halloween game with a chilling price, a call-centre at the end of the world, an unconventional quest for a portal to fairyland, a mother dealing with the loss--and the return--of a child, a desperate woman’s letter to her future self, a repentant scientist’s lament, an envious boy who gets more than he bargained for, and a misguided attempt to gain closure on a very dead love affair.

'One Free Go' -- Darren and Kate threw a huge kids’ party on Halloween, but now they’re not quite sure why.

'Not With a Bang' -- Answer the calls, read the script, enter the data. And when certain words or phrases come up, type out the alarm codes.

'No Regard for Narrative Convention' -- Some people thought it was a great opportunity, when the dimensional portals opened up. Others, like Michael, weren’t quite so sure.

'Sale or Return' -- In the future, money can buy you anything. Or can it?

'Nor Any Drop to Drink' -- Lynsey might look like a little girl, but she’s got a big thirst.

'You Wish' -- You’ve always got to be very careful about what you--or other people--wish for.

'Dear Ingrid' -- Is it still a bad deal if the one who makes it isn’t the one who pays for it?

'On Blackened Wings' -- Dionne doesn’t believe that Rachel’s built a psychic hotline to the monsters out of wires and roadkill. But that doesn’t mean she wants to try it.

'No Apples for Mother' -- Artificial Intelligence and Old Testament religion. Not a good mix.

'Gifted' -- What makes the new girl so special? What’s she got that Francie and Everett haven’t? They’re about to find out. 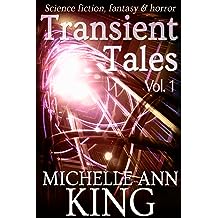 Transient Tales Volume 1 Jan 28, 2013
by Michelle Ann King
( 2 )
$2.78
The first in the Transient Tales series collects 11 short stories of science fiction, fantasy and horror, totalling 20,000 words and ranging from light to dark and all shades in-between.

Precious Things
If you find something in the woods... maybe it’s best to leave it there.

Meredith Said
Zach’s preparing for his first trip through his father’s teleportation gateway. He’s supposed to be going home, but maybe that depends on the definition of the word.

Toil and Trouble
A witchy grandmother, a book of spells, a recipe for a love potion. It’s the perfect way to find a date, right?

The God of Blood and Bone
They always look at the husband first. So when Vince wants his wife dead, he’s very discerning about the choice of assassin.

What We Leave Behind
There are some things you need to survive after the breakdown of civilisation. And some you don’t.

The Author of Your Own Misfortune
Always read the small print of your insurance policy. Especially the one covering trips back in time.

Behind Glass
Tom’s sick. He’s feverish, aching and having blackouts. And he’s hungry. So very hungry.

Nameless, Unreasoning, Unjustified
Humans reach the stars, and find they’re not alone. Neither are they welcome.

A Cat May Look at a Queen
If you make the rules, you have to live by them.

What Doesn’t Kill You
Everyone knows you can’t live in the rotting devastation of the Blight. But Olivia's going to try.
Read more