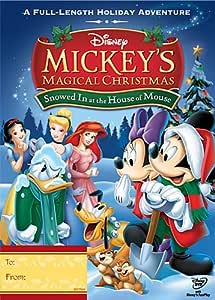 Mickey's Magical Christmas: Snowed in at the House of Mouse

Celebrate the season with Disney's most popular holiday movie ever! Starring Mickey Mouse and 35 of the world's most beloved characters, this one-of-a-kind adventure joyously captures the spirit of Christmas and is sure to delight the entire family. When a huge snowstorm leaves everyone stranded, Mickey and all of his guests at The House Of Mouse, including Pooh, Belle, Snow White, Cinderella, Ariel and many more of his old and new friends, break out the cookies and hot chocolate to help Donald mend his tattered Christmas spirit. The fun starts when Minnie pulls out their favorite holiday home movies and everyone starts to reminisce. Their magical memories soon put everyone in the Christmas mood -- even grumpy Donald, who ultimately becomes the star of the evening. Featuring four unforgettable holiday tales, including The Nutcracker, Mickey's Christmas Carol, Donald On Ice and Pluto And The Christmas Tree, plus an epic finale of The Best Christmas Of All, this holiday treat is bound to become a tradition for you and your family.

A cartoon club hosted by Mickey Mouse, the House of Mouse is where all the big Disney movie stars come to relax and see a show that offers a mix of classic cartoons and live entertainment, like the Quackstreet Boys band featuring Huey, Dewey, and Louie. On Christmas Eve, the show plays to a full house of 35 animated Disney guests, including Belle and the Beast, Cinderella, Sleeping Beauty, the Three Little Pigs, Donald Duck, and a host of other famous characters. But when the show concludes, the House of Mouse has been snowed in, and no one can get home to celebrate the holiday. Mickey and the gang make their own Christmas celebration, beginning the festivities by showing a winter classic, "Donald on Ice." While Huey, Dewey, and Louie create a snowman for the snowman contest, Donald heads out for a day of ice skating that doesn't turn out quite like he'd planned. Next, Professor Ludwig Von Drake attempts to explain how Santa flies all over the world in one night, then some of the guests reveal what they're most thankful for, and then Minnie and Mickey star in their very own version of "The Nutcracker." All the guests except Donald seem to be getting into the holiday spirit, so Mickey tries to brighten Donald's glum mood by screening one of his favorite Christmas stories, "Mickey's Christmas Carol." When Donald sees himself as Scrooge (literally), he begins to realize how lucky he is and gains a new appreciation for his good friends. The evening at the House of Mouse ends with a rousing rendition of the new song "The Best Christmas of All," which celebrates true friends, family, and happy memories and is performed by all the Disney characters in the house. While Mickey's Magical Christmas: Snowed In at the House of Mouse isn't all new programming, it's a nice compilation of holiday favorites that is held together with a new story line and that spotlights a host of favorite Disney characters. Bonus features include the first episode of House of Mouse, in which Pete buys the House of Mouse building with the intention of closing down the club but is outsmarted by Mickey and the "show must go on" clause in the real estate contract. Within that episode are three cartoon shorts: "Pluto Gets the Paper," "Donald's Dynamite," and "Hickory Dickory Mickey." Other bonus features include a sound effects tour, in which a group of children learn about and experiment with the many sound props used in past Disney productions, and sing-along songs "Deck the Halls" and "Sleigh Ride." (Ages 3 to 7) --Tami Horiuchi