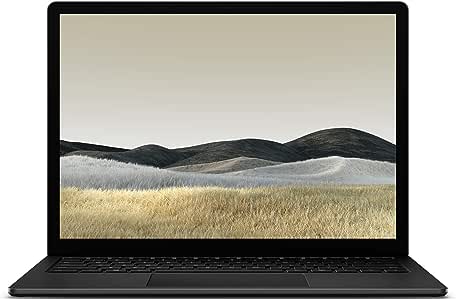 Brand: Microsoft
4.2 out of 5 stars 10 ratings
Available at a lower price from other sellers that may not offer free Prime shipping.

PLEASE NOTE: This LAPTOP IS MADE FOR ENTERPRISE BUSINESS USE. IT DOES NOT COME IN RETAIL PACKAGING.

Janna
1.0 out of 5 stars BUYER BEWARE!!
Reviewed in the United States on September 17, 2020
MICROSOFT IS NOT WHO YOU THINK THEY ARE. I've been using Microsoft products for as long as I've been using computers. Not after my experience with the Laptop 3. Not functional and legitimately the worst customer service of my life.

REVIEW OF DEVICE:
On the surface (ha-ha), the Laptop 3 is everything you could ask for. In reality, it doesn’t work. After 2 months after purchasing this device, I spent at least 1 hour a week fixing various issues (shutting down, blue screens, etc.) before it finally broke down after 6 months of purchase. Microsoft promised me a new device, but sent me a refurbished device. This refurbished device restarts about 3-10 times a day without warning and sometimes shutting down completely. I've lost tons of hours and countless pages of work (even with autosave).
REVIEW OF CUSTOMER SERVICE:
Microsoft (or FedEx – who knows) LOST my faulty device. Microsoft charged me over $3000 for the dysfunctional device they sent me because they say did not receive it. This was after I had already done my due diligence to contact them asking if they had received. For the past 60 days, I've been on the phone with them or emailing them once a day. I have done everything they asked of me, and they refuse to do anything about this situation. So, I have a $6,000 non-working non-functional computer that didn't even last 6 months!
HOW CUSTOMER SERVICE WORKS and why it makes their products worth no more than a penny (time + money) if you have a problem.
• You have to spend at least 1 hour on hold before getting to a customer service agent who lives outside of the US. This is known as Tier 1. Tier 1 agents use a script telling you that they really care, understand your issue, and that they'll do everything they can to help you. Don’t believe them (blame Microsoft, not the employees - they are just doing their job).

• Tier 1 agents can and will hang up on you. During this fight, Tier 1 agents hung up on me right after I disclosed my case number 10 separate times over 2 days (with an hour hold each time and 3 times on a land line). Finally, I refused to provide my case number until we devised a plan to prevent being hung up on and the agent stayed on the phone!

• Never give them your phone or e-mail "in case we get disconnected" because they don't ever call you back. You simply have to wait on hold again (which means talking to someone new and therefore starting over)!

• If you need to talk to someone multiple times, you can't. Don't even try.

• Don't expect the new person to know anything about your case, even with a case number. It took several different agents 3 hours just to come to fully understand what my issue was!

• Agents don't document very well and your emails are useless and the TIER 1 locations don't speak to each other. So, if you initially spoke with an agent in one location and you wanted to follow up with more information, you can't. If you try, you get another agent in a new location and that agent will take over the case and you will have to start all over. This is particularly true if your case is escalated. The new team will escalate the case to their "higher support team" in their specific location and the original escalation no longer is in effect.

• For more complicated cases, Tier 1 can escalate the case (which makes you think that someone is actually going to do something) - That's Tier 2. At Tier 2, you get someone who will communicate via e-mail.

• Tier 2 sends you emails but they will never respond to you. Unless you put it in the subject line that you need a response. Even then, they won’t actually address your concerns they will just placate you enough.

• You will never talk to "higher support." You can't talk to the warehouse that lost your device, you can't talk to the person who sent you your device, you can't talk to the person who printed out labels, or talk to anyone that actually worked on your case, and you have no ability to get anyone to understand your case.
This experience has been corroborated by many people I know and trust. Microsoft has changed. Go to Lenova, HP, or somewhere else. Heck, go to Apple (although I hear their customer service is the also problematic). Just go anywhere but Microsoft. Thanks to google G-suite, google docs, and slides we now have a choice.
If Microsoft should ever read this: What makes me really sad about this experience is the level at which you can script emotional statements that function to increase interpersonal connection like “I understand.” Microsoft, don't take meaningful human experiences and automate them. It may work the first time, but when the receiver finds out that you automate, the statement is no longer is perceived as authentic, which precludes meaning or humanity. I know AI is all around us, but when it comes to humans that work for you, be ethical.

In summary:
As long as there are no problems with your device, you'll be fine. If there are issues, you'll be very very sorry. $6000 is an unreasonable amount of money. And I'm left with a nonfunctioning device. Don't be me. Don't buy Microsoft.

5.0 out of 5 stars Can’t be beat
Reviewed in the United Kingdom on January 2, 2020
Verified Purchase
Small, thin, light, fast and portable. 👍 won’t be going back to Mac.
Windows 10 In my opinion, faster and more secure, don't believe all the mac hype machine.
Read more
15 people found this helpful
Report abuse

Guido Mac
5.0 out of 5 stars Office standard
Reviewed in the United Kingdom on April 2, 2020
Verified Purchase
At work we've moved everyone onto surface devices. All the hot desks have surface docks, so you can sit anywhere with your mobile device and have the full desktop experience. The latop 3 isn't a huge leap up from the laptop 2, but to be fair the laptop 2 was superb. What it does bring is USB C which opens up another world of docks if you think the standard surface dock is a bit pricey. Aesthetics and build quality are A1.
Read more
4 people found this helpful
Report abuse
See all reviews