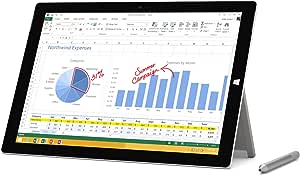 Share
Sell yours for a Gift Card
We'll buy it for up to $75.00
Learn More
Trade in now

Brand: Microsoft
4.2 out of 5 stars 280 ratings
| 174 answered questions
Available from these sellers.

Surface Pro 3 comes with Windows 10, so you can use all your favourite touch apps and desktop software, like Office, and even ask Cortana† to remind you about important events.

Amazon.com Return Policy:You may return any new computer purchased from Amazon.com that is "dead on arrival," arrives in damaged condition, or is still in unopened boxes, for a full refund within 30 days of purchase. Amazon.com reserves the right to test "dead on arrival" returns and impose a customer fee equal to 15 percent of the product sales price if the customer misrepresents the condition of the product. Any returned computer that is damaged through customer misuse, is missing parts, or is in unsellable condition due to customer tampering will result in the customer being charged a higher restocking fee based on the condition of the product. Amazon.com will not accept returns of any desktop or notebook computer more than 30 days after you receive the shipment. New, used, and refurbished products purchased from Marketplace vendors are subject to the returns policy of the individual vendor.
Product Warranty: For warranty information about this product, please click here [PDF ]

Will only ship within the US

4.2 out of 5 stars
4.2 out of 5
280 global ratings
How are ratings calculated?
To calculate the overall star rating and percentage breakdown by star, we don’t use a simple average. Instead, our system considers things like how recent a review is and if the reviewer bought the item on Amazon. It also analyzes reviews to verify trustworthiness.

Ellen
5.0 out of 5 stars MacBook Pro User for 7 Years - Love the Surface Pro 3
Reviewed in the United States on February 12, 2017
Verified Purchase
I am so happy I took the dive and purchased this Surface Pro 3. My MacBook pro was starting to poop out on me after 7 years of its faithful presence. I was dead set on buying another apple product before I started to research. After hours of research and several trips to best buy later, I decided on a surface pro 3. I did not need a full computer because I am just about to graduate from law school. Thus, the most I needed a computer for was Netflix, taking notes, researching, and surfing the web. I couldn't bring myself to pay another $1,500 on a MacBook just to do such. However, I wanted a device that did more than just a tablet - which is the reason why I did not go with the iPad Pro. I love the iPads, but really they are just larger phones. Therefore, in two years, the tablet becomes increasingly slow due to the incapability of handling the new upgrade in software. (I have the iPad 2 and it is painstakingly slow.) I wanted the full access of a computer, but the ease and lightness of a tablet - enter the Surface Pro 3. Upon chatting with several surface experts, I realized that the Pro 3 and Pro 4 were not much different - especially for the tasks I wished to accomplish.

After setting up my Surface Pro 3 I have immediately fell in love. I was so nervous at first to buy from Amazon because the surface experts said that most Pro 3s that you find online are refurbished or used. But I will tell you that this was brand new. Not a scratch or dent on it. I decided to upgrade the stylus and keyboard to the Surface Pro 4 keyboard and stylus because those were the largest improvements between the 3 and 4. I am so glad I did. Even though this one comes with the 3 stylus, the 4 is a vast improvement.

This price is a steal for a brand new Surface Pro 3. If had any doubt, like I did, don't. This seller is providing you exactly what you expect - a brand new, fully functioning, Surface Pro 3.

My only qualms with this computer are two things: (1) it was not charged at all when I received it; thus, I had to wait a bit to charge the computer before it would turn on; and (2) Microsoft 10 was not downloaded on the computer when I received it; but, you are able to update while setting up the computer. Although these two things were annoying at first, it does not change my mind with how great I think the Surface and this company did when providing me this computer. For this low price, I am willing to take the extra time to charge the computer and update it to windows 10.

Ray D - Pittsburgh
5.0 out of 5 stars Plus in 2009 battery life was not that great in laptops so I was always sure to have ...
Reviewed in the United States on September 18, 2015
Verified Purchase
Model: Surface i5 4GB with Windows 10
Primary Use: Typical Business Functions (internet, email, CRM, video conferencing, remote support, market trading, mobile payments)
Secondary Use: Web Development, Router Interface, Photo Editing, Kindle, Audible

Perspective: I own and operate an IT consulting firm. I spend a lot of time out of the office, onsite at customer locations. I opened the business in 2009 and until now I have primarily used iOS devices, I have carried an iPhone 4 and 5s and an iPad 2 and Mini.I went with iOS because my laptop at the time weighed 6 pounds was 1.25 inches thick and would take up to 8 minutes to boot up and connect to a network. When you do this at 5 or 6 locations you have just added an hour to your day. Plus in 2009 battery life was not that great in laptops so I was always sure to have a charger. along.

Impressions: This is what I have wanted in a mobile device. I thought about buying the best surface money could buy, because a comparable laptop would not perform up to the level that I need, but the Surface does not disappoint. The SSD coupled with the intel i5 punches above it's weight. It boots in seconds, and is very responsive, typing and mouse feel great on the keyboard (I prefer to keep it flat on the desk) and I can type at a normal pace. I have an usb to Ethernet adapter which allows me to plug into a network and configure a device. I also use the USB to slave customer hard drives for chkdsk and other functions such as an offline virus scan. I have never even come close to testing the battery life. I ran it for an entire day in and out, and then used it at home and only got it to about 30% remaining. It runs the full desktop version of Sink or Swim beautifully, the mobile versions of TOS are watered down so it is really impressive to have that much data and ability in the palm of your hand. Also the kindle app is SO NICE on this.

Comparison: Compared to the ipad mini this much more useful. I could only really use my ipad to answer emails and connect wirelessly to devices. This does everything a laptop and iPad can do so yea for about 200.00 more (I had the lte version). It has more storage space and the USb port gives it endless possibilities. When we first started using iOS we have to pretty much change the way we did things in order to work it into our system. But switching back was as easy as signing in with our Microsoft accounts. Windows 10 does a great job keeping everything in order, plus with 100gb one drive space is not an issue. My iPad used to get way behind me when I would type, to the point where I could sit there and watch it ghost type for 15 - 20 seconds. The surface is nothing like that, everything is smooth and responsive.

Conclusion: I have to give Microsoft credit, there is a lot of pressure to be mobile and where other companies take their mobile devices and simply make them bigger Microsoft took a computer and made it smaller and THAT is exactly what I needed.

bdarnell
4.0 out of 5 stars Not as advertised, but ........
Reviewed in the United States on December 22, 2016
Verified Purchase
BEWARE !! This tablet DOES NOT come with Windows 10. It ships with the awful 8.1 and there is no upgrade. If you are looking for a tablet with Windows 10, this is not the one. To make matters worse, the box is even marked as Windows 10 installed.

I contacted the seller (cyberMIND) and they furnished a link to upgrade to W-10. While the upgrade process was painful, it got done. I have revised my rating to 4 stars.
Read more
39 people found this helpful
Helpful
Comment Report abuse
See all reviews

Valentina
1.0 out of 5 stars Windows 10 not included
Reviewed in Canada on September 21, 2018
Verified Purchase
I got a brand new one for a bit more money from the same people because the used ones had very crappy battery life. Everything was going perfectly for about 6 months then the touchscreen started detecting touch in a random spot messing everything up. I had to diasable it but even though the pen works, in some places on the screen it doesn't. When I tried to restart it, it sometimes takes over 40 minutes to restart. Windows 10 NOT installed. Need to install it in your own. Pro sucks with windows 8.1. It was a huge mistake replacing my laptop with this. I dont know if its a surface 3 issue or just buying off here. But tbh I wouldnt risk it. If you cant afford a newer version like me, just stick it out with your current computer till you can. I regret this.
Read more
Report abuse

M
4.0 out of 5 stars Four Stars
Reviewed in Canada on August 9, 2017
Verified Purchase
so much better than our Ipad
Read more
Report abuse