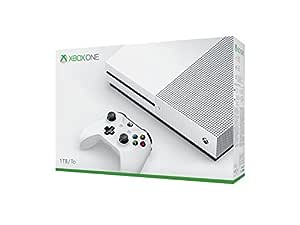 Brand: Microsoft
Platform : Xbox One
4.7 out of 5 stars 1,400 ratings
Available from these sellers.

4.7 out of 5 stars
4.7 out of 5
1,400 global ratings
How are ratings calculated?
To calculate the overall star rating and percentage breakdown by star, we don’t use a simple average. Instead, our system considers things like how recent a review is and if the reviewer bought the item on Amazon. It also analyzes reviews to verify trustworthiness.
Top reviews

C. J. Elliott
5.0 out of 5 stars Excellent upgrade
Reviewed in the United Kingdom on February 17, 2019
Verified Purchase
I didn't think I was going to get much from an upgrade from a classic XBox One to this XBox One S. I was wrong.
Firstly I had read lots of reviews saying that people were getting refurbished or opened boxes, or that the mains plug wasn't UK, or that the DVD region code was wrong. None of these were true in my case - brand new, original packaging and security, UK mains plug, correct DVD region
Now onto the performance.
Your games don't run at a higher frame rate, or give you any form of gaming advantage over the original, however, the control interface is much more snappy. No waiting forever for the XBox to boot up - it gets to the point that you are playing your game about 20% faster
The controller has a subtly textured grip, much better than the slippery original
I only have a full HD TV, so I can't comment about 4k upscaling on the DVD player, but the movies look just a little more defined in the shadows than the original
It's smaller in itself, and there is no huge power brick that needs to be hidden anywhere. It also runs slightly cooler
There is no Kinect port, but I never used it anyway, and you can by a hugely expensive adapter if you want to continue with your existing device
It's got a proper on-off button, but I find that controlling on off by using the controller seems more fluid and reliable, so I now use that
A lot of benefits that I wasn't expecting, and a worthy replacement for by broken XBox one original.

Mr Mrs Kemal
5.0 out of 5 stars BRILLIANT DESIGN QUALITY AND EASY TO SETUP
Reviewed in the United Kingdom on November 24, 2018
Verified Purchase
My son got his first job and wanted to buy himself something with his first big wage so he ordered himself this!

Apart from him not waiting till black Friday deals were most Xboxes were 25% off he was still well chuffed!

The Xbox came well packaged and all was sealed and brand new... My son set up the unit within minutes of it entering the house and everything seems to be working Just Great!

It has Fantastic graphics and looks awesome to watch, my son at present is playing Forza Horizon and it looks fab on our big tv.

In my personal opinion I think that the Xbox has come along way since the good old days, I remember buying my husband a Microsoft Xbox Crystal Limited Edition which is still able to be played on, it just the graphics aren't all that good :P But it goes to show just how long they last.

So here are our pro's and cons to the new upgrade!

* It has Great Graphics
* You can watch Netflix, Amazon, Hulu & much more
* You can watch 4K Blu-ray movies & stream
* You can get an Xbox Game Pass to access more games
* Connect and play on Xbox Live
* It has a 1Tb internal hard drive
* Play with friends online
* Perfect for gaming

* At the moment the family don't seem to have any negative views on the new upgrade, the only one I have is that it could have come with the 3 month Xbox Live membership.

Overall All in all, this is a Great console nothing more can be said as this is exactly what my son was looking for and he is completely satisfied with the purchase.
Read more

Dean Platt
5.0 out of 5 stars Absolutely Brilliant, Great value for money for such a Slimmer Xbox One S
Reviewed in the United Kingdom on May 25, 2019
Verified Purchase
I purchased this Xbox One S as a replacement for my original Xbox One which developed a Fault! OMG I am well Impressed with this Slimline White Xbox One S Console, I am getting double the Hard Drive space with 1TB compared to the original Xbox One which only had 500GB Hard Drive, I No longer have to worry about where to put the Powerbrick, Xbox One S can upscale games to 4K resolution if you have a 4K TV, Xbox One S will be able to offer gaming at a higher resolution than its predecessor, although it won't quite be as good as native 4K it now has built in power supply as you only need the following Cables, Power Lead, HDMI Lead, and then you are good to go.....It didn’t take long at all to Setup this beautiful Xbox One S Console, doing the update was done in a matter of minutes, it really helps having a 350Mbps Fibre Internet Connection with Virgin Media 😊

No Kinect which tbh is No longer needed as you can plug in a Headset plus a Webcam for Streaming your Gameplay! It is a much quieter and slimline console then the original Xbox One!

Overall I am extremely impressed well worth the money, Great seller

Emma Williams
5.0 out of 5 stars Very happy son...see review...
Reviewed in the United Kingdom on February 2, 2019
Verified Purchase
My son bought himself this console from his birthday money and then a 4K monitor to utilise the 4K ability. He said it’s faster, image quality is incredible and he is over the moon. He claimed there was a massive difference from the Xbox one to the Xbox one s
Read more
27 people found this helpful
Report abuse

Ms. Alexandra Wilson
5.0 out of 5 stars Fantastic!
Reviewed in the United Kingdom on February 18, 2019
Verified Purchase
Can't praise this enough. Arrived promptly (Amazon are the best!) It's an addition to my daughter's ever growing collection of consoles.
Beautiful design. So easy to set up. Simply plug to mains & tv. You're all set. Wi-Fi already installed so no need for dongles etc. Just connect to your Wi-Fi whrn prompted. Even came with batteries for the handset which is included. Very happy indeed
Read more
17 people found this helpful
Report abuse
See all reviews