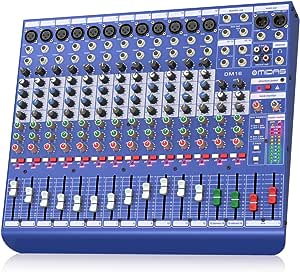 Brand: Midas
4.2 out of 5 stars 12 ratings
| 5 answered questions
Available at a lower price from other sellers that may not offer free Prime shipping.
New (7) from $425.00 + FREE Shipping

4.2 out of 5 stars
4.2 out of 5
12 global ratings
How are ratings calculated?
To calculate the overall star rating and percentage breakdown by star, we don’t use a simple average. Instead, our system considers things like how recent a review is and if the reviewer bought the item on Amazon. It also analyzes reviews to verify trustworthiness.

JESUS SAVED ME
5.0 out of 5 stars I hoped, but didn't expect it to sound so good...[ONE YEAR UPDATE]
Reviewed in the United States on September 4, 2019
Verified Purchase
With the lack of useful reviews and videos online, unusual of me, I decided to take a blind gamble on the DM16 based on a good feeling about it. Thank God, I wasn't wrong.

LIKED - Respectably quiet preamps, especially at this price point. Even maxed out, which is silly, ambient noise overpowers unit's self-noise. At normal settings, noise floor remains in between the low -80 decibels and high -70 decibels. That's smile-inducingly on par with my Audient ID14, Apogee Duet Firewire and Behringer X32 Rack. So, NO ANNOYING HISS of any kind to worry about.

Lots of headroom compared to my Yamaha MG10 and Mackie ProFX12v2. Line inputs can take really hot signals that clipped my other mixers, and the signal is far enough from the top that I could add gain. Preamps can also be pushed a bit without sounding ugly.

Flavorful EQs. Whether adding or subtracting, they remain musical and natural-sounding to my ears. I really like them, because they sound like they add or subtract harmonic content instead of just frequencies like most mixer EQs. Most ear pleasing EQs I've heard from an affordable mixer.

Surprisingly strong headphone amp. At 9 o'clock on its volume knob, my 300 ohm Sennheiser HD 6XX get as loud as I'd listen to them without endangering my hearing. Clean , clear-sounding too at moderate volumes.

Amp hiss shows when the knob is way higher than safe for the ears. Running my Denon DA-300USB DAC's RCA outputs through the DM16 yields a big, fun sound. It's no audiophile headphone amp like the Denon's, but it has more power and a much bigger sound.

Nice build quality. While not tank-like, the mixer looks and feels well-assembled. All knobs and sliders are smooth, feeling good to my fingers. The DM16 feels hollow inside, but not cheaply made. It feels affordable, not premium, but fit and finish is perfect on my unit, as good as it can get. For $269.99, I couldn't be happier.

NOT LIKED - Wiggly pots and low friction on sliders, which is understandable at this price. I'm sure they could last years if treated kindly and protected from dust.

Headphone knob has lots of side to side wiggle, so it needs to be turned purposely centered or it creates channel imbalance. My Mackie ProFX12v2 was like that but to a lesser extent even if its knob felt cheaper.

Truth is that companies use cheaper components on their "toy" mixers to be able to sell them at an affordable price and still make a profit. I am not complaining. 12 respectably quiet preamps and pleasant-sounding EQs for what the DM16 sells for is good and acceptable to me. Any skilled person could make something good with this mixer. I always get the results that I want with it.

I can't find any more dislikes. I purchased it knowing its obscurity, its lack of useful reviews, and what features it had and didn't have. For over a decade, I've been subconsciously missing my old Made in USA Mackie 1402-VLZ PRO's fun character, and this DM16 has filled the void I had in me.

My first impression was a pleasant one, better than I expected, given that Behringer owns Midas so... depending on the viewpoint, it could be said that this is a Behringer console even if Midas designed it in the UK.

Five stars for the "Midas" DM16. I like Uli Behringer and respect his hussle, even if his company has maintained its tendency to be...inspired...by other companies' designs. The Midas DM16 physically looks inspired by the Soundcraft EPM12.

I will update this review if anything changes. God bless you and take care.

EDIT: I hit the 12 month mark with the DM16. Wow, feels longer than that. Anyway, it's still looks like new and works like new. I have babied it immensely, though. I don't know how it'll hold up with less careful handling, but the knobs, sliders and connectors feel sturdy enough for daily use. I want it to last, though, so I treat it gently.

I love it as much as I did a year ago. It's really a quiet, nice-sounding, affordable mixing console and I recommend it. I use mine with drums and synths, and record the main outputs with the new SSL 2+.

Mike
5.0 out of 5 stars Best bang for your buck
Reviewed in the United States on July 13, 2019
Verified Purchase
The board runs itself. Out the box it was good to go. Really easy to work while playing music.
Read more
Helpful
Report abuse

Lawrence Pit
5.0 out of 5 stars Best analogue mixer
Reviewed in Australia on July 16, 2020
Verified Purchase
For this money this is a steal. Pure analogue, simple, love it.
Read more
Report abuse