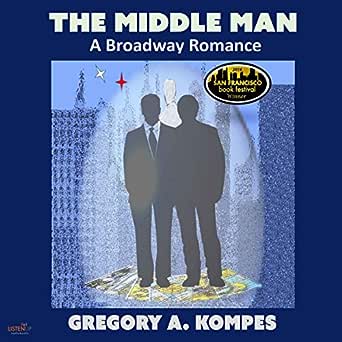 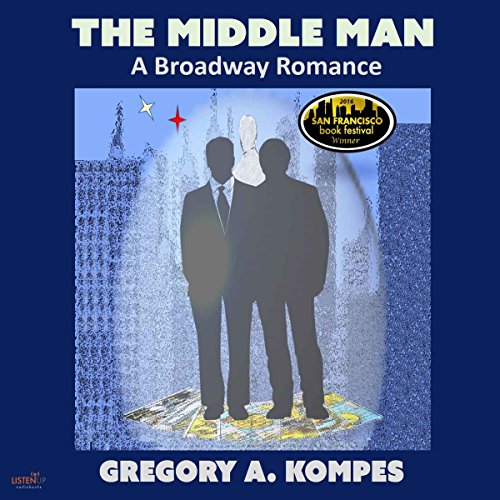 The Middle Man: A Broadway Romance

Alan Arthur Katz
5.0 out of 5 stars Gentle And Wonderful
Reviewed in the United States on August 3, 2014
Verified Purchase
Mr. Kompes is a first-class writer. "The Middle Man" follows a brief period in the life of Duke Donovan, a gay man who was thrown out of his home at the age of 16 for being gay, hustled men with his "Tarot Card Readings" (with a coda of sex} and became fabulously wealthy and influential amongst the intelligentsia in New York. His bogus card readings, at some point, turned into the real thing, and he ended up as the confidant of great healers, financial titans, two-bit (but rich) despots, politicians and even the head of a revolution "of the people".

At this point in his life, he's got pretty much everything any man could want - a beautiful, talented boyfriend with a great future in the theater, a brownstone that is the envy of Page Six, a dog he adores, a loyal butler, great post-impressionist paintings, and a long line of young men queued up for the opportunity to take him to bed.

But something is missing. As a result of a near-death experience (and how that happens is actually uproariously funny, especially when his injuries are caused by a fat and outrageously endowed woman of a certain age, falling on top of him), he gets to experience "the other side", first hand, and it changes him. He knows there is something missing, some purpose he needs to have, but he can't pin down what it is.

Duke is a remarkable character, drawn deeply and sympathetically by this talented author. Although he makes no moral judgments, the directions he gives to his "clients" often result in less suffering in their countries, the restoration of health in some of those closest to him, and he serves as a catalyst for bringing talented people together - and to their destinies. He is a profoundly good and forgiving man, loyal to a fault, and even willing to forgive the monster who is his father. Somewhere along the line, you hope there is a soul-mate for him, someone who will give to him as much as he gives to the others surrounding him.

I am often skittish about buying paranormal books, especially gay-themed paranormal books. It always struck me that the paranormal memes were either the wish-fulfillment of disenfranchised and oppressed gays, or the gay meme was tacked on to an otherwise "straight" paranormal story. That's definitely not the case here. The one lesson you bring with you from "The Middle Man" is that true love, in the universe, is genderless, and way beyond the fleeting satisfaction of physical contact. It is the most exquisite energy, total acceptance, total connection, both eternal and infinite. I am so glad I didn't let my prejudices keep me from reading this remarkable book.

This is the first book I've read by Mr. Kompres, and will, most assuredly, not be the last. He is a brilliant story-teller. The description, dialogue, the ruminations and the emotions are all rendered almost poetically. There is something so authentic about the characters and their interaction, something so simple and true, that you empathize with them, almost instantaneously. This book is extraordinarily well-written.

Which is why I did not deduct one star for editing, which is my normal policy. I get so discouraged when even an author as talented as Mr. Kompes, who has degrees in both English Literature and Education, publishes a work of art peppered with embarrassing elementary-school editing errors. There must be something in the water, for it seems that many authors of gay fiction appear to lack a basic grasp of the apostrophe. I can't tell you the number of times I've run across the same sloppy errors in book after book. Hey guys, there are NO apostrophes in plurals. But you MUST use them in contractions and possessives. Every time I encounter these very basic, obvious errors, my reading grinds to a sudden and unpleasant halt while I try to figure out if I just misread a line, or the editing is just so poor that I need to decode the sentence before continuing. A few examples from "The Middle Man":

Apostrophes -
"Most psychic's [sic "psychics"] have help from entities..."
"Your [sic "you're"] not accepting power, you're taking it." [Note that the first one is wrong, the second correct]
"Duke, your [sic "you're"] back!"

And even a few missing words and sentence fragments -
"...this wouldn't be the best time to your job." [missing words?]
"It's always interesting to me that the most powerful people in the world, people who have other people killed at will." [no verb, no object?]

I know I tend to belabor these kinds of errors in my reviews, but please, authors, you know you have to do better! Every time I run across another glaring error, it's like watching a movie with some kid pelting you with popcorn. Talk about distracting!

It is a mark of how much I like this book and how impressed I am by the author's writing skill and talent that I did not deduct any stars for the poor editing.

The book is so good, so gentle, so creative, that I still recommend it, with all my heart and without reservation.

Shar
5.0 out of 5 stars Cyclic and Sad
Reviewed in the United States on November 21, 2012
Verified Purchase
Oh, so sad. I do not mean to spoil anything by the title of my review though, so don't read too much into it.

Anyway, there were many things that I liked about this novel. The writing was interesting, the point of view added a lot to the story and the concept was also great. The characters were very thoroughly developed and obviously incredibly well-thought-out.

Reading this novel was enjoyable. It was not exactly a page turner but when I did read it I would sit down for a fair amount of time and read because it did not lag.

The only problems that I have with the novel were probably my fault. I say this because there were a few plot points that I did not fully grasp and so the ending had me a little confused. I cannot exactly point them out here, but because it is stated in the summary I still do not really understand what went on with the poisoning. There are other unresolved issues that I will not mention here because of potential spoilers.

Now, while I would highly recommend this book to anybody who enjoys the genre, I must preface this with the fact that it was very sad. A cyclic plot is something that many may not know of but whenever they happen in stories I find them very depressing. This was no exception and it left me feeling sort of empty and also impressed by The author's use of the title and of this plot element. Even though I may not have physically shown the emotions that The Middle Man made me feel, I still felt an attachment to the characters and to the story in general.
Read more
One person found this helpful
Helpful
Report abuse

L O
4.0 out of 5 stars Scintillating
Reviewed in the United States on April 23, 2016
Verified Purchase
The author writes in the first person, making the characters come to life. Each with their own story and agenda. He weaves the story of love and attraction, mystery and psychic-metaphysical imagery.

I gave this book 4 stars, only because I felt parts to be too explicit for my prudish mind.
Read more
Helpful
Report abuse

MINITALES
5.0 out of 5 stars The Middle Man
Reviewed in the United States on January 26, 2013
Verified Purchase
A great read. Wonderful characters. Please give me Malcom I love him. Many twists and turns--lots of surprises. A great addition to your collection. Read it, share it, save it for later to read again.
Read more
2 people found this helpful
Helpful
Report abuse

Tex Reader
4.0 out of 5 stars Good Mix of Gay Romance and Paranormal.
Reviewed in the United States on October 13, 2016
4.0 of 5 stars –
I love various gay genres, including romance and paranormal, and Gregory Kompes did justice to both.

Kompes’ style was easy-to-read and casual, to match Duke's “usual calm demeanor” (the MC). Even so, there was a good pace and the tension was built nicely and realistically. There was an intriguing, well-done element of Duke being not only a psychic, but very wealthy as a result of his helping clients, and he had an interesting team of supernatural “guides.”

The story was told effectively from the first-person POV of Duke. I got into his relaxed, unruffled, even philosophical approach to life. It was endearing, but maybe laid on a bit thick, that instead of hoarding his money, he was generous to people and causes (and not just with money, but also with caring and helping in other ways). But after all, he had to make up for one other interesting aspect of his life – his “offering advice to dictators and despots. Not the noblest of professions. Rationalization helped. After all, with [his] advice, a lot fewer people were murdered but received better treatment.”

All through this Duke was trying to navigate life, balancing his physic skills and the knowledge and wealth gained from them, while still searching for meaning and relationships and exploring life. So his musings make this somewhat philosophical in places, which I appreciated, and I ended up rooting for Duke.

Being a romantic, I enjoyed those parts of the story, partly because they weren’t overly sweet, but still had passion. Yet Duke still kept his distance, preferring mostly to take a noncommittal friends-with-benefits philosophy to relationships. And for those interested, there were some sex scenes, some explicit yet well done, capturing nicely a man’s sense of feel and emotions.

Overall, this was an interesting mix of gay romance, paranormal, and spiritual that drew me in in unusual and pleasant ways.
Read more
One person found this helpful
Helpful
Report abuse
See all reviews