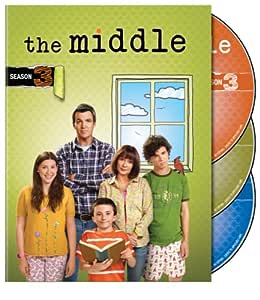 Middle, The: The Complete Third Season

Work. Kids. Bills. Comedy. It’s how the middle half lives. The Heck family returns for Season Three, bringing with them further episodes of offbeat fun – with one foot in reality and the other on a greasy wrapper from Burgerworld. Two-time Emmy® winner Patricia Heaton and Neil Flynn star as Frankie and Mike Heck, frazzled parents trying to stretch their patience and paychecks around three brilliantly true-to-life kids: slacker teen Axl (Charlie McDermott), the over-but-somehow-always-under-achieving Sue (Eden Sher), and the bookish Brick (Atticus Shaffer), perhaps the only kid to ever have his birthday party at the public library. This year, Sue's entering high school and will attempt to not only navigate the raging waters of school life, but also co-exist with Axl, who is not too thrilled with his little sister being at the same school. With high-profile guest stars like Ray Romano, Glee’s Chord Oversteet and more, THE MIDDLE is exactly where you want to be.

4.8 out of 5 stars
4.8 out of 5
415 global ratings
How are ratings calculated?
To calculate the overall star rating and percentage breakdown by star, we don’t use a simple average. Instead, our system considers things like how recent a review is and if the reviewer bought the item on Amazon. It also analyzes reviews to verify trustworthiness.
Top reviews

YAwriter
4.0 out of 5 stars Funny but dumb
Reviewed in the United States on September 27, 2020
Verified Purchase
I enjoyed watching The Middle for the most part. It bugs me that people think Sue is a nice character. She even said so herself, that she is a nice girl. She is delusional, and so is anyone else that believes her. She is selfish. Her name should be Selfish-Sue. If you listen closely, everything she says is about her in some way. Now Axl is also selfish, but he owns it. Sue also wants things handed to her. She does not want to work for them. That's why she never makes anything she tries out for. If she really wanted to be a cheerleader, she would take tumbling or at least learn to do a cartwheel and the splits. She says, "Sue Heck doesn't give up." That's not true. She gives up every time she doesn't make something, and she moves onto something else. She only wants to get on a team or in a club so that people will think she's better than she is. When someone says, "You don't want something you didn't earn, do you?" She says, "More than anything." She has also said, "I congratulate myself all the time. I want other people to congratulate me." In a world filled with selfish people wanting what they don't deserve and haven't worked for, do we really need role models like this?

The mom is also pretty selfish. That's where Sue gets it from. The mom also thinks she's a good person and thinks she does everything for everybody and nothing for herself, but she is happy when her son is dumped because he hugs her. She doesn't care he's in pain. And when the booster club goes to school to decorate their son's lockers, she just throws some glue and glitter onto Axl's locker. Then it turns out not to even be his locker. Anyway, these people get on my nerves sometimes, so I don't watch it that much. I am just glad my family is not like this.
Read more
Helpful
Comment Report abuse

RR
5.0 out of 5 stars If only they would finally, finally release this season on DVD!
Reviewed in the United States on April 1, 2013
Verified Purchase
You know all those over-hyped, supposedly 'edgy' and daring comedies the critics insist all discerning TV fans SHOULD love and appreciate? Well, The Middle isn't among them ;) But while critics have given the show a lukewarm reception, all of the actual TV viewers I know have been immediately charmed and delighted by this underrated gem of a show.

The Middle doesn't go out of its way to flaunt just how edgy and risque it can be. It doesn't, like so many other critically lauded shows, feature wholly unlikable people doing wholly unlikable things while half-winking at the camera over just how zany they are. It doesn't go for cartoonishly over-the-top wackiness or the kind of constant lowbrow sexual innuendo and fart jokes that you might unpleasantly associate with high school locker rooms.

Instead, The Middle simply tells the story of a family that's likable and even admirable despite also being realistically, hilariously flawed. The humor stems from the strong characterizations, sharp dialogue and the clever insight peppered throughout. (You'll be thinking "that is so true...it's scary how well I can relate to that!" at least a few times per episode). We get flashes of heartwarming poignancy here too, but rest assured that it's never too sappy or forced. It's quietly uplifting, but in a way that feels earned rather than manipulatively sentimental.

This is one of those rare shows that successfully blends humor with heart, and I was pleasantly surprised to realize just how much I've come to love spending time with this family. I used to have a weird visceral dislike for Patricia Heaton and, for reasons alluded to above, rarely like sitcoms...but this show immediately reversed my opinion of Patricia Heaton's acting abilities, and even gave me a renewed hope for the sitcom genre!

One major reason it's worth owning on DVD: The vast majority of the episodes not only hold up with multiple viewings, but actually improve, as you notice subtle moments of awesomeness that you were too busy laughing to pick up on the first time around. So many shows *claim* to have struck that balance between wit and poignancy; to have created lovable yet hilariously flawed characters; to have written dialogue that's sharp and memorable. This is one of the few shows that, in my clearly Middle-loving opinion, has actually succeeded in all those areas and more. It's a show that provides mood-boosting humor, a steady supply of heartwarming charm, and razor sharp insight into what it means to be part of a family. I can't wait to FINALLY get my fangirl hands on the Season 3 DVDs, and look forward to rooting for and laughing with the Hecks for many years to come!
Read more
26 people found this helpful
Helpful
Comment Report abuse

Michael
5.0 out of 5 stars You won't stop laughing!!!
Reviewed in the United States on January 10, 2020
Verified Purchase
Cast is FANTASTIC , the episodes are sooo hilarious. Hard to have a favorite cast member , they are ALL so good in their part. So many funny episodes, would recommend it to anybody. Great show for the whole family, everyone Lucy's it. It never resorts to "cheap" juvenile humor, swearing or bashing anyones values---and its FUNNY. There are so many trash shows on TV these days, they should take a page out of this one's script and learn that yes, you can be entirely entertaining without trash!!
Read more
One person found this helpful
Helpful
Comment Report abuse

Louisa M
5.0 out of 5 stars Endearing
Reviewed in the United States on August 23, 2013
Verified Purchase
The Middle is, quite simply, a story about parents, children, and their everyday funny/sad/crazy/ordinary/extraordinary experiences. It is also the absolutely funniest show currently on TV. Although I used to like to eat dinner while I watched, I gave up this practice when I began to laugh so hard that I actually choked, and much to my dismay, missed the next few lines of dialogue because of prolonged coughing. This was back in Season One (the "Spelling Bee" episode, to be exact) and I have been laughing ever since.

The actors, writers, producers, and all involved have found the perfect recipe for comedy by sprinkling a touch of sweetness---that "aww" moment--into each episode. This particularly refers to Axl, the oldest son, who can be stubborn, irritating, clueless, self-centered, you name it, then turn around and do something that you never saw coming, and that will just melt your heart. Mike and Frankie raised him right!

The other selling point is the great cast of revolving supporting characters. The aunts, the Donahues, Rev. Tim Tom (and his guitar) and Brad! The only way this show could be better would be to see more of Brad.

As much as most episodes make me laugh, the ones involving Mike and the quarry cats, and the aunt's 100th birthday, which I believe are both in Season Three, made me cry. But that is okay...because it is what the Heck's life, and ours as well, is all about. Laughing, crying, caring, trying, failing, and then trying again, knowing that our friends and family are right there to support us through it all.

October 8th is circles on my calendar...the day the Season 3 DVD will be available. As Sue would say, "Yay!" The rest of the show speaks for itself.
Read more
2 people found this helpful
Helpful
Comment Report abuse
See all reviews

Kel
5.0 out of 5 stars The middle season 3
Reviewed in the United Kingdom on December 21, 2016
Verified Purchase
Christmas present for daughter, she loves this series. Good price. Ordered region 2 but region 4 came instead however plays fine so not a problem.
Read more
Report abuse

KMcD
5.0 out of 5 stars Love!
Reviewed in the United Kingdom on April 26, 2017
Verified Purchase
I love this show! Dvd was an Australian copy we think not 'normal' British sort. Worked fine on normal DVD player.
Read more
Report abuse

SandyB
5.0 out of 5 stars Arrived in good condition and on time
Reviewed in the United Kingdom on September 3, 2018
Verified Purchase
Big fan love the series
Read more
Report abuse

zedman37
5.0 out of 5 stars Good American comedy
Reviewed in the United Kingdom on May 24, 2018
Verified Purchase
I bought for the wife. She loves it!
Read more
Report abuse
See all reviews