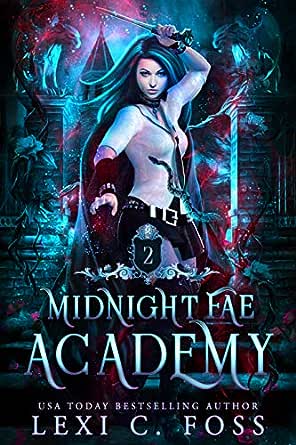 You've subscribed to Midnight Fae Academy! We will preorder your items within 24 hours of when they become available. When new books are released, we'll charge your default payment method for the lowest price available during the pre-order period.
Update your device or payment method, cancel individual pre-orders or your subscription at
Your Memberships & Subscriptions
There was an error. We were unable to process your subscription due to an error. Please refresh and try again. 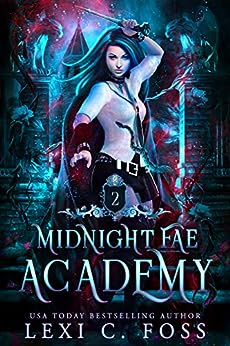 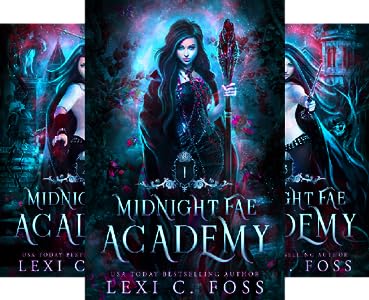 4.9 out of 5 stars
4.9 out of 5
47 customer ratings
How does Amazon calculate star ratings?
Amazon calculates a product’s star ratings based on a machine learned model instead of a raw data average. The model takes into account factors including the age of a rating, whether the ratings are from verified purchasers, and factors that establish reviewer trustworthiness.

Taylor B.
5.0 out of 5 stars Um...Holy Mother of Cliffhangers
Reviewed in the United States on June 3, 2020
Verified Purchase
Wow....just....uhhhhhhhhhhh!

First, this book ends on a cliffhanger... I knew that going in, but for the love of chocolate that was rough.

As the second installment in the Midnight Fae Academy series, Aflora is torn between her mistrust of her three mates and her desire to give into them. Shade is full of secrets and riddles, always trying to act unfazed, but weighed by his knowledge of the future. Kols has accepted their bond despite being a jerk in the beginning, but has to protect Aflora and his throne. Zeph is a warrior who doesn't know how to handle the emotions his Earth Fae mate stirs up in him while still hiding both Kols and his mate bond to her. All while distrusting Shade and making their quad unstable and incohesive. A mystery link to Aflora's past has also surfaced, but is he a distant memory or another, more soul reaching tie?

I love this series so much. It has action, flawed characters, steam, and a fast moving plot that is always building. There weren't many elements of the academy life in this book, but I felt that was not the most important part of the story and more of an atmosphere that heightened the plot. There were also moments when in Shade's head that I was still confused because there is still so much we don't know about his backstory and end game. The epilogue left me saying, "Wait, what?" over and over as I was reading, too, which caused confusion to my nearby fur babies.

The relationship bonds that were strengthened felt organic and each of her mates connect with Aflora in a different way, which made it easy to separate each man, but also gave a new depth to each and understanding. Nothing is at it seems and I know that the next book will not only answer my exorbitant amount of questions, but provide a phenomenal conclusion to Aflora's story...though I wouldn't be sad if more books happened because her three men (maybe four?) are....mhmmm. I'm glad I only have to wait a few months to get the conclusion.
Read more
One person found this helpful
Helpful
Comment Report abuse

Ali Crean
5.0 out of 5 stars Goodness me! Brilliant.
Reviewed in the United States on June 5, 2020
Verified Purchase
Where to even start, though!? I don't even know!? I'm flabbergasted.

So book one was really to lull us into a sense of comfort and give us a sense of happiness so Lexi C. Foss could mentally screw with our heads in book two and leave us devastated and in need of therapy.

You shouldn't be reading this if you haven't read book uno, so shame on you if you spoil yourself. Book two begins immediately where one left off in Shade's chambers, with Zeph and the guards showing up, and Aflora vowing vengeance on her mates. You should be all girl power at this point even if you have an inkling that this is a misunderstanding because women need to stick together against the patriarchal rule that is the Nacht Dynasty.

So much of Midnight Fae Academy Book Two is emotionally yo-yo-ing that I don't have the words to write a review. This book is incredible, but my brain is fried.

Shadow, who is still my favorite, gets much more filled out as a character and still manages to remain mysterious and somewhat the villain--despite getting the chance to explain his choices. Kols and Zeph get to be sexy together, as well as sexy with Aflora, and we get the receipts in book two. Those are some hot receipts. Zeph--you are a naughty, naughty Headmaster. And, Kols, what does forbidden taste like?--Asking for a friend.

There are many crazy twists and turns in this that you will not know where she is going with this until you are there despite seeing the signs. Even when you CAN see it, the path to it isn't the one you thought you would take. Lexi C. Foss is ever a mastermind. I am still clearly a fan.
Read more

Skgillman29
5.0 out of 5 stars Vampiric Fae oh my
Reviewed in the United States on June 4, 2020
Verified Purchase
Loving this series which is a spin-off of the world presented to us in the Elemental Fae series. This is Flora's story and it's heating up. The Earth Elemental Fae princess is proving she is not to be trifled with even if she is cut off from her earth source. I can't wait for October and book 3 as nobody puts Flora in a corner.
Read more
Helpful
Comment Report abuse

Jewel Johnson
5.0 out of 5 stars Cannot wait for the last book.
Reviewed in the United States on June 4, 2020
Verified Purchase
There are some awesome plots twists and I am so ready to see how this ends. I love that Aflora becomes bolder and more outspoken in every book! Definitely an awesome queen.
Read more
Helpful
Comment Report abuse

JoyffreeTop Contributor: Fantasy Books
VINE VOICE
5.0 out of 5 stars 😭 Heart shattered ...
Reviewed in the United States on June 4, 2020
I knew there was more to our dark shadow

This episode was IDK
Intense?
Fast-paced?
Emotional?
Explosive?
All kinds of white-knuckling my kindle WTH moments

Book two opens right where we left off -
Our little earth fae Aflora
Locked up -Betrayed - Cold and Alone
Trapped in a misogynistic world she doesn't understand, being judged for a crime she didn't commit
But like so many things in the dark fae realm -
Nothing is what it seems

This (if you can believe it) blew away the first book in this trilogy
I thought book one was intense -
This took "emotional roller coaster" to a whole new level
And the secrets? How could you?
The lies? The self-sacrifice?

I know I say this repetitively but it's because it's true
Foss has a gift.
Each release she gives to her readers is an innovative story line filled with idiosyncratic characters and the most ingenious world-building
Every. Single. Time.
Read more
One person found this helpful
Helpful
Comment Report abuse
See all reviews from the United States