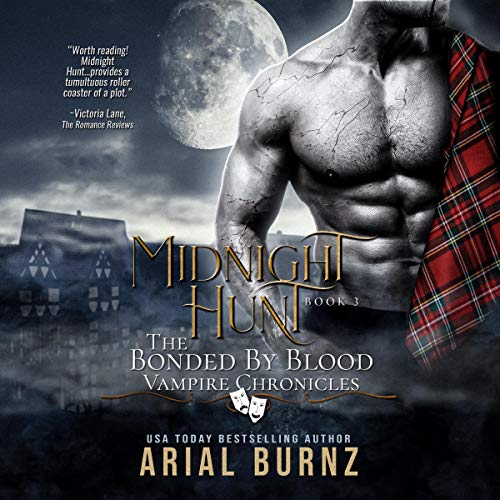 Arial Burnz (Author, Publisher), David Monteath (Narrator)
4.8 out of 5 stars 107 ratings
See all formats and editions
Sorry, there was a problem loading this page. Try again.

Driven by the desire to meet the true love she's experienced in her dreams, Monika Konrads uses her magickal skills to weave a love spell during the waxing of the moon. As if in response, a strangely familiar and handsome Scotsman is seeking to settle in their village. But the werewolf stalking Monika has other ideas about who her love interest should be.

Broderick MacDougal is drawn to the powerful witch by a familiar force, and makes the chestnut-haired wise woman his next pursuit to unravel the mystery of why she reminds him so much of his late wife, Davina. However, there are other supernatural forces surrounding her, exposing Rick to a darker side of this deal he made for immortality...and this enchanting nymph may be his only salvation.

Monika's quest to find a cure for the werewolf curse causes a chain of events that starts a witch hunt, dooming both her and Broderick to the fiery stake of judgment. And through these trials, they learn the Church has a new ally who is hunting down the members of the Army of Light.

Special invitation from Audible!
Learn more about Membership
List Price: $19.95
You Save: $2.49 (12%)
By completing your purchase, you agree to Audible’s Conditions Of Use
Sold and delivered by Audible, an Amazon company
Share

4.8 out of 5 stars
4.8 out of 5
107 global ratings
How are ratings calculated?
To calculate the overall star rating and percentage breakdown by star, we don’t use a simple average. Instead, our system considers things like how recent a review is and if the reviewer bought the item on Amazon. It also analyzes reviews to verify trustworthiness.
Top reviews

Mary Barscz
5.0 out of 5 stars Absolutely Awesome book!
Reviewed in the United States on October 22, 2014
Verified Purchase
This series just keeps getting better and better!
We are once again focused on Broderick Mac Dougal, in this book we are 80 years after Midnight Captive. With his wife seemingly gone for ever, can he carry on and keep living his life without the other half of his heart?
Monika Konrad is a healer in her village along side her grandmother. Since the Inquisition is happening in the world, she is careful about who she lets see her true self, she is a fire witch. After being alone and wanting a man that she is compatible with, she goes to extreme measures to find the man that has visited her dreams.
When a stranger come to town asking for Monika's help, she learns that he is a werewolf, and needs her to help him find a cure for the disease. Something Monika would love to have as well, since her father is also infected.
Broderick is called to the town where Monika lives by unseen forces. When he meets her, it is like seeing his late wife, Davina all over again. This raven haired woman may just be his Davina, but he needs to be closer to her to fully understand what is happening.
When Angus learns where his enemy is he sets off the Inquisition in her town. Monika and Broderick are both facing certain doom at his hands.
Can Monika being a fire witch save them both or will Angus finally win and rid himself of he enemy and brother he hates?
You need to read this book for those answers! I'll be patiently waiting for more from this series!
Read more
2 people found this helpful
Helpful
Report abuse

schulzhere
5.0 out of 5 stars KEY TO THE PROPHECY
Reviewed in the United States on April 5, 2016
Verified Purchase
It has been 80 long lonely years since vamsyrians Brodrick MacDougal lost his beloved wife Davina to consumption. All his family are now dead and gone except his enemy brother Angus Campbell.
Brodrick's dreams of Davina are changing. Someone else is showing up. Brodrick feels a strong pull to Germany where he meets fire witch Monika Konrads a reincarnation of Davina. She smells, tastes and kisses like Davina but she is unlike her.
Their story is a long hard road to happiness. They are menaced and attacked by werewolves, hunted and condemned by the Church and to top it all off Brodrick,s sworn enemy Angus Campbell decides to show up.
The twists and turns and outstanding writing by Arial Burnz will keep you reading till the end.......OR IS IT?
Read more
Helpful
Report abuse

Mary Anna
5.0 out of 5 stars I WANT MORE!
Reviewed in the United States on August 16, 2013
Verified Purchase
I hated finishing this book.
When I finished the previous book Midnight Captive I was all over the place! I could not believe it ended like that. ! I would have thrown the book across the room screaming if it hadn't been for the epilogue introducing Midnight Hunt. Instantly I knew what was going to happen, yet the adventure to get there was so much better. I fell more deeply in love with Broderick in this book and I absolutely love Monika. She was perfectly written for Broderick. And dammit. if I couldn't help myself to grow fonder of Angus in this story as well. Adding a sexy roguish werewolf to the bunch only made it sizzle even more. I can't wait for the next adventure!!
Read more
One person found this helpful
Helpful
Report abuse

arlc
5.0 out of 5 stars Another great one
Reviewed in the United States on July 3, 2017
Verified Purchase
Book three of this series is another great read. I'm completely enthralled in this series and can't wait to start book four. These books completely take you into the story, like you're there while everything is happening, experiencing everything as if you're there. In my opinion one can't ask for more, these books have it all. So far one of my personal favorite series.
Read more
Helpful
Report abuse

The beginning page will make you cry as we see old ones die. But fate has allowed one to be reborn but time must pass before it will happen.

Wolves and an old enemy are out to get Broderick. But with the help of a witch and a prophecy that still needs fulfilled, anything is possible.
Read more
Helpful
Report abuse

dora la exploradoraTop Contributor: Fantasy Books
5.0 out of 5 stars Kept me in suspense all the time
Reviewed in the United States on July 22, 2016
Verified Purchase
Every time the stories get better. This one was full of action, intrigue, suspense, violence, sex and interesting, strong and different characters. Monika’s character was an asset to Broderick’s search for the truth about the prophesy. Liked that she was a powerful witch, smart and sensible. No side tracked. The plot development had me reading avidly looking for the good details that were giving more information about the outcome of the mystery. Great story that kept me interested and looking for the next book. Enjoyed this book a lot.
Read more
Helpful
Report abuse

Nikki D. Caravella
5.0 out of 5 stars The continuation doesn't disappoint!
Reviewed in the United States on September 9, 2015
Verified Purchase
It was an absolute delight to see Broderick reunited with his love. To say the characters were flawless and believable would be an understatement. Marcus as Thomas was a wonderful addition. I could actually "see" his underlying depravity.

All I want to do is break into book 4!
Read more
One person found this helpful
Helpful
Report abuse

BT
4.0 out of 5 stars Okay read
Reviewed in the United States on October 21, 2020
Verified Purchase
Entertaining if you enjoy this genre
Read more
Helpful
Report abuse
See all reviews

Emma
5.0 out of 5 stars good read
Reviewed in the United Kingdom on January 2, 2014
Verified Purchase
Really enjoyed the trilogy It kept me hooked all the way through and I would recommend the books, to anyone
Read more
One person found this helpful
Report abuse

jackieFulton
5.0 out of 5 stars Fantastic books
Reviewed in the United Kingdom on October 5, 2013
Verified Purchase
cant wait for the next one .best books ihave read for along time whens the next one out hurry up plz xx
Read more
One person found this helpful
Report abuse
See all reviews
Back to top
Get to Know Us
Make Money with Us
Amazon Payment Products
Let Us Help You
EnglishChoose a language for shopping. United StatesChoose a country/region for shopping.
© 1996-2021, Amazon.com, Inc. or its affiliates