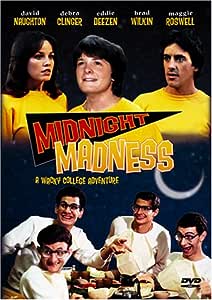 NOT AN EX-RENTAL! DVD'S AND ARTWORK ARE IN LIKE NEW CONDITION!

With Animal House being a smashing success in the late-70s, one thing was made painfully clear: fraternity movies were a thing.

Graduate student Leon (Alan Solomon, future supervising producer for many lottery game shows) summons five college students to his apartment in Los Angeles, and challenges them to participate in his latest game creation: The Great All-Nighter. He tells them about his game and instructs them to form teams. At first, the leaders refuse to play. However, rivalries between them lead all five to change their minds by the game's start time.

Yellow Team: Mostly the nice guys, the heroes, etc. They're led by our hero, counselor Adam (David Naughton, "Makin' It", "My Sister Sam"). He's a decent guy.... aside from the fact that he sees his tagalong little brother Scott (Michael J. Fox, without the J. at this point) as a royal pain. What Adam doesn't know (or chooses to ignore) is that tonight just happens to be Scott's birthday. The birthday boy just wants to fit in, so he ends up ordering beer for the guys. At this point, Scott is underage, so..... yeah.
Blue Team: The villains. BOOOOOOOO! All selfish and rude individuals who cheat at every opportunity. The lead is overweight snob and main antagonist Harold (Stephen Furst, "National Lampoon's Animal House", later of "St. Elsewhere", actually a nice guy). One of the members is portrayed by future Hollywood director Andy Tennant. Their car actually solves the clues for them..... until Harold hides his stash of marshmallows in the circuit board.
Green Team: The jocks from the football team. One of them is portrayed by Dan Blocker's son, Dirk. Has sort of a resemblance to Hoss as well. Now, you can find Dirk on Brooklyn Nine-Nine. Anyway, they all happen to be quite fond of Pabst Blue Ribbon, and when a clue leads them to the factory..... hoooooo boy!
Red Team: An all-female team, all feminists, led by Donna (Maggie Roswell, "The Simpsons"). They also have two overweight twins (who were played by actual, overweight twins). If you've ever wanted to see Maude Flanders in a dance club, here's your chance.
White Team: Debate team nerds, led by Wesley (Eddie Deezen, prolific voice actor). They drive around in mopeds.

This film was rated PG (with Stephen Furst's character swearing throughout the film). This was so much of a shock that Disney didn't put their name anywhere on this film. Indeed, the print on this DVD ends with a Buena Vista International logo.

The climax takes place at the beautiful Westin Bonaventure Hotel, you can probably guess which team wins, there's a huge party, and all's well that ends well. This would not be the film that secured the role of Alex P. Keaton for Mr. Fox (that would be Class of 1984), but at least he paid his Disney dues early. That's right, nearly everybody in Hollywood does something for Disney at least once.

You might buy this film for Fox, but you'll stay for everything else. It's just idiotic "turn your brain off and enjoy" fun.

aznalur
5.0 out of 5 stars fagabeefe?
April 21, 2017
Format: DVDVerified Purchase
I was probably between 5 and 10 when I saw this movie on HBO (I think), and it became a part of my sister and I's VHR collection of regularly watched movies along with our cartoons. It's a silly, typical 80's flick, and to boot, its got a very young Michael J. Fox. I probably wouldn't recommend it to new viewers, but hey, it's still a classic to me :)
Read more
6 people found this helpful
Helpful
Comment Report abuse

omary95
5.0 out of 5 stars Classic silliness
July 16, 2013
Format: Prime VideoVerified Purchase
There may be a lot of people who've never heard of "Midnight Madness," but it's worth a watch. It has even inspired a HUGE scavenger hunt in New York City. It's also the big screen debut of one Michael J. Fox.

There are far too many movies that work so hard to be serious or dramatic or action-packed. This movie is simply silly and fun. Is it predictable? Maybe. But it's fun to watch things unfold. Are there problems with the script? Maybe. But, on the whole, it works as a family movie & my son really enjoyed it. (It even got us thinking about a scavenger hunt of our own!)

Btw...if you still remember Kaptain Kool and the Kongs you may recognize a familiar face in Debra Clinger. Do you remember "I'm a pepper, he's a pepper...wouldn't you like to be a pepper too?" Does "An American Werewolf in London" ring any bells? Then you'll recognize David Naughton immediately. There weren't a whole lot of fellas back then as cute as he. There a few more familiar faces in this movie as well. Take a look!
Read more
5 people found this helpful
Helpful
Comment Report abuse

Wendy A
5.0 out of 5 stars Fun older movie
January 5, 2019
Format: DVDVerified Purchase
I remember watching this movie as a kid and loving it. I love puzzles and scavenger hunts so this is perfect for me. I had this movie on VHS back in the day but haven't been able to watch it in more than 15 years when we got rid of our last VHS player. I was ecstatic to learn this movie is actually on DVD!
Read more
One person found this helpful
Helpful
Comment Report abuse

Eric B. Gordon
5.0 out of 5 stars Dated - but Underrated
August 24, 2007
Format: DVDVerified Purchase
Sure, this movie may seem quite dated, but it's nevertheless quite underrated. A highly unique game that takes the players on an all-ight scavenger hunt around the city of Los Angeles, looking for clues that'll propell them forward when solved. The contributers consist of one skinny college genius, two pretty girl accomplices and five teams of students from varying walks of life. Three of the teams may appear stereotyped: the red team compraises four members of an outcast sorority; the white team consists of a quartet of skinny, four-eyed debaters; the green team includes fivefootball gorillas who spend their time off the field creating misery for he other teams. But, these individuals are still genuine at the core.

The core focus of the film's main body is the competition between the blue team and the yellow team. The yellow team's leader, Adam (played by David Naughton) is a highly intelligent, driven and forward-looking college senior who understands the importance of teamwork. The blue team leader, Harold (Stephen Furst) is self-centered, overweight and oblivious to the world around him. While Adam enters the game willingly, Harold is forced headlong into it b his frustrated father. And, while the yellow team is interested in fair play and following directions, Harold's only interest is in winning and going to any extremes to do it.

Interestingly enough, this movie was produced at a pivotal moment in American pop culture. At the start of the game, we witness the red team inhabiting a discoteque, the likes of which had already begun to go out of fashion. Also of note was the use of the Pabst Brewery as a clue location; Pabst Blue Ribbon bear is now produced by the Miller corporation. Another clue location is in an arcade referred to as Pinball City and, as the name would suggest, populated largely by pinball tables. One of few videogames in the place is an actual game called StarFire. This game pointedly draws on the first StarWars film from 1977. In one year's time, there'd be more videogames than anything in most arcades and more money going towards playing them than towards buying music.

In addition, the Walt Disney company and Buena Vista Entertainment made a supposedly calculated move when the movie was packaged, not including the Disney logo, for fear that a PG-rated movie would tarnish their reputation. However, this writer is mildly convinced that the inclusion of Disney packaging might've aided this film's popularity on the strength of notoriety. Six years later, we were given the Disney film flight of the Navigator, and their adult divison, Touchstone Pictures was fully active, producing pictures of its own.

The leading man, (Naughton) is best known for his role in the 1981 comedic horror flick, An American Werewolf in London. It is commonly believed that Naughton was chosen by director John Landis for this role on the heals of his spokesmanship for Dr. Pepper. However, as mentioned before, Naughton's advocary is played by Stephen Furst. Furst is best known for his portrayal of Kent 'Flounder' Dorfman in the Landis film Animal House. This writer is convinced that Landis opted to follow Stephen Furst's caeer path. This would ultimately lead to a screening of Midnight Madness, in which case David Naughton would become clearly visible. The likelihood that John Landis would recruit Naughton American Werewolf on the heels of this film is at least as likely as on the heels of a soft-drink commercial.

(Of corse, it doesn't hurt that one of the jocks is portrayed by Dirk Blocker, whose legendary father Dan Blocker was internationally known for portraying Eric "Hoss" Cartwright on Bonanza. Dirk also made a cameo appearance during Season 1 of Little House on the Prairie. And, his character definiely adds surrealistic levity to the film's main plot. Good-looking guy, too.)
Read more
2 people found this helpful
Helpful
Comment Report abuse
There are 253 customer reviews and 282 customer ratings.
See all 253 customer reviews
Write a customer review