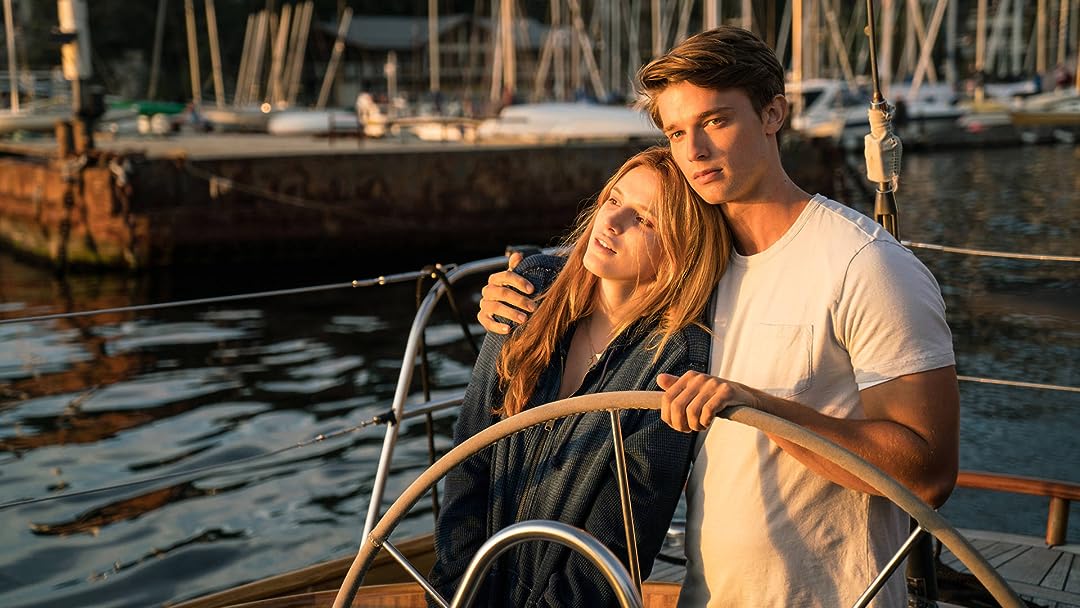 RichReviewed in the United States on June 23, 2018
5.0 out of 5 stars
Don't Fear The Moonlight
Verified purchase
Midnight Sun is probably the best romantic movie that I have seen in a long time. Bella Thorne, Patrick Schwarzenegger, Quinn Shephard, and Rob Riggle were all great together in this movie. When this movie started and I saw Rob Riggle in it, I thought, "Oh geez, this movie isn't going to be very good because of him". Surprisingly, he actually did a pretty good job. I also thought Xeroderma pigmentosum (XP) was a fake disease that they made up for the movie, but to my surprise again, it's actually real. I don't want to say anymore and ruin this movie, but I HIGHLY recommend it to everyone, even if you just watch it once. I couldn't give this movie anything less than 5 stars. Bella Thorne did one of the best acting jobs I have seen from a young actress. Rent or buy, I promise you won't be disappointed unless you don't like good movies that will pull on your heartstrings.
13 people found this helpful

Russell SReviewed in the United States on October 21, 2019
5.0 out of 5 stars
Wonderful and i loved it
Verified purchase
17-year-old Katie Price (Bella Thorne) has been sheltered since childhood with a rare disease that makes even the smallest amount of sunlight deadly. But after nightfall, Katie goes out to the train station to play her guitar. One night she meets Charlie (Patrick Swarzenneggar) A boy she has watched out of her window for years. They and so cute together and Patrick does a fine job of acting and I did love him a ton. The story is amazing too. I would go 7 stars if i could. It is sweet and funny and moving and teary. My very biggest recommendations. See the movie and i hope that Patrick will do more films.
2 people found this helpful

SoleilReviewed in the United States on March 29, 2020
2.0 out of 5 stars
Not a Fan
Verified purchase
I'm not gonna lie: I like cheesy movies. But this wasn't just cheesy. It was straight up bad. The actors did okay, but they didn't really have much to work with as far as the script and the uber-predictable storyline went. Plenty of holes in the plot, poor character development, and there was no chemistry between the two love interests, making their budding love really flat, uninteresting and not believable.
2 people found this helpful

JKReviewed in the United States on August 3, 2018
5.0 out of 5 stars
Beautiful but sad
Verified purchase
OMG...I was totally shocked, I loved this movie so much I watched it several times. I was a bit skeptical because Bella Thorne’s acting on the TV show Famous something was so bad but she did an amazing job in this movie...This is a beautiful love story...I’m not going into too much detail but it will make you laugh and cry and if your a female ...you’ll totally relate to many aspects of this movie regardless of age. Plus dude is so not hard on the eyes.
4 people found this helpful

♡♡♡Reviewed in the United States on May 16, 2021
5.0 out of 5 stars
Heartbreakingly Beautiful! ❤
Verified purchase
If you liked "A Walk To Remember," you'll love this movie as well! They're both beautiful stories and individually their own. My goodness, where do I even begin... This movie was beautiful, touching, funny, heartbreaking, and a rollercoaster of emotions! I really loved this movie, the storyline and cast! But I will say, it made me burst into tears! It truly has a heartfelt ending! Make sure you have some tissues nearby! Definitely recommend it!

Amazon CustomerReviewed in the United States on August 23, 2021
5.0 out of 5 stars
Great Love Story & documentary on XP rare sunlight disorder. Recomend
Verified purchase
For years a young girl watched the world go bye from safety of her bedroom window as sunlight would kill her. She fell in love with with a boy who passed by her window. A chance encounter after dark they meet & fall in love. She doesn’t tell him about her XP. Love story is played by great actors. Great documentary on a genetic Disorder that due to it’s rarity was not researched. I recommend this movie.

JenniferReviewed in the United States on May 11, 2019
5.0 out of 5 stars
Loved this Movie
Verified purchase
This was a precious movie. A great love story. The actors were wonderful. Patrick played his part well and I'm so loving these kids from our older actors. They are great with making movies the entire family can watch. I'm a fan of the Shriver family, they are people of solid character.

Alissa EspinozaReviewed in the United States on August 5, 2018
3.0 out of 5 stars
Pretty Good
Verified purchase
Overall, I liked this movie; however, some of the scenes, mainly when she sings, are cheesy. You can tell she's not singing or playing the guitar and a few of the scenes aren't credible. It's sad, but it's not heartwrenching. You don't spend a lot of quality time with the boy and girl -- it's mainly just scenes of them being together, not a ton of depth. I did like her relationship with her dad and best friend.
3 people found this helpful
See all reviews
Back to top
Get to Know Us
Make Money with Us
Amazon Payment Products
Let Us Help You
EnglishChoose a language for shopping. United StatesChoose a country/region for shopping.
© 1996-2022, Amazon.com, Inc. or its affiliates