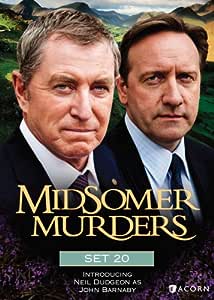 Midsomer Murders: Set 20 (Master Class / The Noble Art / Not in My Backyard / Fit for Murder)

WHAT EVIL LURKS BEYOND THE WELL-TRIMMED HEDGES OF MIDSOMER…

The cozy villages of Midsomer County reveal their most sinister secrets in these contemporary British television mysteries inspired by the novels of Caroline Graham, modern master of the English village mystery. Detective Chief Inspector Tom Barnaby (John Nettles, Bergerac) has policed the murderous county for decades, and now he’s ready to retire. In these four episodes, Barnaby investigates his final cases before leaving the denizens of Midsomer in the capable hands of his cousin, DCI John Barnaby (Neil Dudgeon, Life of Riley). Also starring Jason Hughes as Detective Sergeant Ben Jones.

THE MYSTERIES
Master Class—Competition over a prestigious music class unearths a long-kept secret.
The Noble Art—A reenactment of a championship boxing match turns deadly.
Not in My Back Yard—A clash over property development leads to a string of murders.
Fit for Murder—The Barnabys' spa weekend is interrupted by a gruesome discovery.

4.6 out of 5 stars
4.6 out of 5
240 global ratings
How are ratings calculated?
To calculate the overall star rating and percentage breakdown by star, we don’t use a simple average. Instead, our system considers things like how recent a review is and if the reviewer bought the item on Amazon. It also analyzes reviews to verify trustworthiness.
Top reviews

Long Time Customer
1.0 out of 5 stars SERIES 20 THRU 25 ARE A HUGE FRAUD
Reviewed in the United States on December 11, 2017
Verified Purchase
If you are a MM fan and have bought series 1 thru 19, you should be informed the the series 20 thru 25 are a huge fraud - all these stories are from the original 1 -19 series (exact copies). They (Alcorn) are ripping you off by selling you what you already own. Don't look for other comments about this fraud, the brain dead people who buys these do not even notice.
Read more
20 people found this helpful
Helpful
Comment Report abuse

Pamela Jane Brink
5.0 out of 5 stars I will miss John Nettles
Reviewed in the United States on November 15, 2019
Verified Purchase
For 20 years John Nettles played the lead role of Tom Barnaby in Midsomer Murders. This was his final season. I will miss him and will not be pursuing any more Midsomer Murder seasons with a new lead.

I liked the way Nettles handled his character but I was getting bored with the bizarre murders and the disfunctional couples/families portrayed each episode.

I loved the settings - the beautiful homes, gardens, interiors. How the producer managed to find such wonderful places in which to set the scenes is remarkable.

The story lines differed depending upon the screen writer - some memorable - others not.

I was sorry that the cast filmographies were not continued - although I was frequently disappointed that the guest actors I wanted to read about were not always given. This season was a good ending to a long running series.

University DocTop Contributor: Camping
5.0 out of 5 stars Great set & last set with John Nettles aka DCI tom Barnanby & it's downhill from here.
Reviewed in the United States on September 30, 2014
Verified Purchase
I'm a big fan of Midsomer Murders, though I prefer the earlier seasons with Gavin Troy much better. This is another great set of episodes in the Midsomer Murders. If you're a fan of British TV and particularly crime dramas, there is no reason why you shouldn't enjoy this collection. Sadly, these later seasons are not so difficult to figure out as the earlier seasons won, but they're still enjoyable. The great part about this set is when cousins DCI's John and Tom Barnaby work together on a case.
The sad part of this set of episodes is the farewell to DCI Tom Barnaby (John Nettles) and his wife Joyce. I've tried watching a few of the new episodes, several actually to give the new characters a fair chance, but I can't get into them. The humor and camaraderie that existed up to now is gone from set 21 forward. When Set 20 ended, in my opinion so did the show, but BBC keeps it going.
Read more
7 people found this helpful
Helpful
Comment Report abuse

Amazon Customer
5.0 out of 5 stars The surface tranquility hides the wonderful debauchery underneath
Reviewed in the United States on December 25, 2012
Verified Purchase
Series twenty (20) of the very fine British Murder Mystery Series "Midsomer Murders" certainly carries on the fine tradition of the previous seasons. That tradition for twenty (20) seasons has consisted of splendid writings, eccentric characters, great acting and wonderful direction.

Series/season twenty (20) has four (4) ninety (90) minute episodes that are filled with beautiful gardens on the surface while lurking "below" are "murders most foul" that leads to good detective work by Barnaby (wonderfully acted in a very courteous manner but with much humor by John Needles--I've adored him for all of the twenty seasons) and his partner DS Jones (marvelously acted with some astonishment at Barnaby's intuition in solving cases and with loads of humor by Jason Hughes). Season twenty (20) was very much, per usual in this "Midsomer" series, enjoyed by me; however, my enjoyment was "tinged" with sadness because this marks John Needles' departure along with the characters of his wife and daughter--I've come to adore them too.

If you desire to view some good well written mysteries that are about super talented pianists with "selective breeding" as a major goal in life, horrific deaths by cement and horse tranqulizers, boxers whose goals include "bedding" any woman available, sexual secrets and unfulfilled love that lead to murder(s), etc., feel free to buy Series twenty (20) of "Midsomer Murders" it is filled with so much debauchery that makes for splendid entertainment.

(The episode, in Season twenty-20-that covers the character of Barnaby's retirement was very "bittersweet" for me. I was very sad to be losing John Needles as DCI Barnaby because I've loved him doing the role for so very long. At the same time the episode was filled with what I have loved about the series of "Midsomer Murders" -good mysteries filled with humor and loads of eccentric characters and with Barnaby and his wife Joyce "bouncing" off each other in splendid ways--great and very natural acting by the two actors)
Read more
3 people found this helpful
Helpful
Comment Report abuse
See all reviews

CRYSTALLINE
5.0 out of 5 stars EXCELLENT AS USUAL
Reviewed in Canada on August 3, 2012
Verified Purchase
I've invested a large amount of money into this series and will continue to do so. Barnaby steps down and lets his cousin carry on in his position. Surprisingly the transition was smoother than I expected. The quality of the DVD is of the best, as usual.
Read more
One person found this helpful
Report abuse