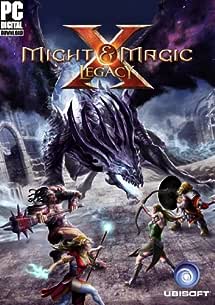 Visit the Ubisoft Store
Platform : Windows Vista, Windows 8, Windows 7
| DRM: Uplay
3.5 out of 5 stars 15 ratings
Currently unavailable.
We don't know when or if this item will be back in stock.
Note: After purchase, you can access the item in Your Games Library.
By placing your order, you agree to our Terms of Use.
This product is non-returnable and non-refundable.
Note: Currently, this item is available only to customers located in the United States.
Download size: 3 KB
Download time: 0 seconds on broadband, 0 seconds on dial-up

After a decade, a Might & Magic® RPG is back with both the unique core formula and a new set of improved and fine-tuned features. The best RPG of its class!

In the wake of the spectacular events in Might & Magic® Heroes® VI, you will play in a party of four adventurers entangled in intrigue and political machinations unfolding in and around Karthal. The city, on the verge of secession, is prey to competing factions vying for its control. Your actions will determine the fate of the city.

Might & Magic® X Legacy is an authentic solo experience in the classic first-person RPG genre. Create and lead your group into an exciting open world and battle mythical powerful creatures while collecting ancient magical treasures!

Alan W Bollen
2.0 out of 5 stars Does Not Include All that is Advertised
Reviewed in the United States on January 16, 2018
Verified Purchase
I bought this game because it said that the package included both Might & Magic VI and M&M X plus the DLC codes for the game. However, all I received is M&M X. The package did NOT include M&M VI nor the codes for the DLCs. Furthermore, after completing the first portion of the game, advancement to the next level was greyed out seemingly because the DLCs cannot be activated without the codes.
Read more
Helpful
Report abuse

Tim
1.0 out of 5 stars Slow game play, restricted movement, buggy...
Reviewed in the United States on September 26, 2017
Verified Purchase
Received a "Program has stopped working" message after 15 minutes of play. Took a bit of researching to find the root cause. This game will only work with nVidia or AMD video cards.

Also, the gameplay is slow and irritating. Nothing like MMVI where you can roam free. This game restricts movement from box to box (like a board game) where you can only turn 90 degrees at a time.
Read more
Helpful
Report abuse

Kenneth King
5.0 out of 5 stars solid game for lovers of might and magic and turn based role playing games
Reviewed in the United States on April 26, 2017
Verified Purchase
This game is great for MM lovers. turn based, true to the form of the game, unlike MM9 where it was more real time based. Good plot and story, reasonable encounters if you build your party and play intelligently. I hope we haven't seen the last of this enduring series.
Read more
Helpful
Report abuse

Paul
5.0 out of 5 stars I really liked this one
Reviewed in the United States on September 29, 2015
Verified Purchase
I really liked this one. Its very much like the old MM games. The story line was good, the game was challenging You can even edit the xml files to make new items/alter existing ones (making them is slightly hard, but doable) I would recommend getting this game if you liked any of the other might and magics up through 6.

There was one crash bug that would happen sometimes that was slightly annoying, but it didn't happen very often and usually the auto save would catch your game. All games have their bugs. Anyway, great game.
Read more
Helpful
Report abuse

Fred Grant
4.0 out of 5 stars Need Uplay to install but good otherwise
Reviewed in the United States on May 27, 2014
Verified Purchase
Warning! You need Uplay to install this game - I didn't see that information anywhere in the description. I guess that would be okay - just a hassle to have to download something else to install a game - however I could never connect to the Uplay site so I could not download anything in order to play the game. UPDATE: Amazon wrote me back right away and somehow now I can connect to the Uplay site and download the game! Still a pain and extra step but here's hoping all goes well! Final update: All is well and I love the game.
Read more
6 people found this helpful
Helpful
Report abuse