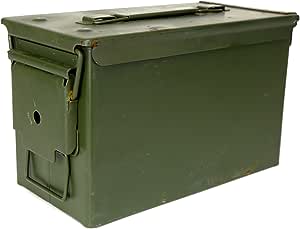 Brand: Military Outdoor Clothing
4.7 out of 5 stars 1,646 ratings
| 26 answered questions
Available at a lower price from other sellers that may not offer free Prime shipping.

Since 1982 Military Outdoor Clothing Inc. has been a supplier of Military Surplus products from around the globe. We also make our own line of Clothing & Gear ranging from Military-Spec Battle Dress Uniforms (BDU’s) & Army Combat Uniforms (ACU’s), to Military Spec duffle bags. Military Outdoor Clothing has also designed our own Tactical Clothing & Bag line under the brand name “Diplomat”. Our latest creation, X-Camo, is a unique digital camouflage pattern using natural colors, making it useful in all terrain.

David Crouch & Bret Kimmel are the founders of Military Outdoor Clothing Inc. We started out in the Army Navy industry in the early eighties as two young traveling salesmen for “BURK MFG” located in Dallas, TX. Est. 1929. Burk manufacturing made military clothing for the government, and later supplied Army Navy stores with work wear and military clothing. After several years on the road we had so many salesman samples that we decided to take them to the local flee market to get rid of them and make a little money on the side. The first day went so well we decided to rent a 10’ x 10’ booth. We ended up taking turns working the booth every weekend while the other was on the road selling. Later we opened our first retail store which was only 900 sq. ft located across the street from North Texas State University in Denton TX, which we aptly named “North Texas Army Navy”.

The 50 Caliber Ammo Can from M.O.C. makes an excellent small dry box for repair kits, personal gear and first aid supplies or your ammo. They're rugged, waterproof and built to last. They are constructed of heavy gauge steel for bombproof protection. The rubber lid gasket ensures a watertight seal. Latches securely to keep contents safe. It has a sturdy folding carry handle and a metal loop for attaching with a carabineer or strap. Inside dimensions are 11 Inch by 5.5 Inch by 7 Inch. Used U.S. Military surplus in good condition.

FREE SHIPPING WITHOUT MINIMAL PURCHASE. SHIPS FOR THE PRICE YOU SEE LISTED. SHIPS SAME DAY IF ORDERED BY 3PM CST MON-FRI. THESE CANS ARE GRADE 1, BUT SHOW MINIMAL SIGNS OF USE. MAY HAVE SCRATCHES AND DINGS FROM STORAGE. MINIMAL SURFACE RUST, BUT FULLY FUNCTIONAL, PRACTICALLY NEW CANS.

4.7 out of 5 stars
4.7 out of 5
1,646 global ratings
How are ratings calculated?
To calculate the overall star rating and percentage breakdown by star, we don’t use a simple average. Instead, our system considers things like how recent a review is and if the reviewer bought the item on Amazon. It also analyzes reviews to verify trustworthiness.

imjacksmimi
5.0 out of 5 stars Authentic Ammo Box!!!
Reviewed in the United States on December 21, 2018
Verified Purchase
Before I give my review of this item I have to say that I laughed at the reviewers who complained that the ammo box they received was not acceptable because the description of the item is described as new and they received a used one. The description of this box says “previously issued” US GI ammo box. The beauty of this box is that it does have minor flaws such as rust and a maybe a little ding on it.

I received my ammo box today and am extremely satisfied with it. It does have small rust spots on it but that is the great thing about it. It has character and I love the fact that it has been previously used my our military. I got it to store my ammo in. I buy my ammo 1000 rounds at a time for each caliber hand gun that I have. I already had a couple of these boxes for my 9mm and 45mm. I recently acquired a.38 special revolver so naturally I had to get another ammo box to go with it. I would absolutely recommend this item to people looking for an authentic ammo box. For the rest of y’all who wants a brand new no defects or character box I suggest you stick with shopping at Academy or Harbor Freight.

Bruce
1.0 out of 5 stars Not a 50cal ammo can
Reviewed in the United States on November 27, 2018
Verified Purchase
Great ammo can but not a 50 cal ammo can. I was looking for an ammo can that said 50 cal on it, not 7.62. Unless the military puts 50 cal ammo in cans marked for other calibers, this item is not what it is marketed as.
Read more
22 people found this helpful
Helpful
Comment Report abuse

Thaddeus Clark
5.0 out of 5 stars Used Military Surplus
Reviewed in the United States on March 8, 2018
Verified Purchase
First off, this ammo can is USED MILITARY SURPLUS, so if you expect a cosmetically flawless can suitable for decoration, keep looking. If you want a solid steel construction ammo can, this is the one. I purchased this can expecting surface rust, dings, dents, etc. These cans are fantastic and I would not hesitate to purchase more. As a personal bonus, my can was marked with 5.56mm on the side, exactly what I plan on storing in it. Buy with confidence!
Read more
24 people found this helpful
Helpful
Comment Report abuse

Traveling Ink
5.0 out of 5 stars Exactly what I wanted
Reviewed in the United States on September 24, 2017
Verified Purchase
A few scratches a few minor rust spots and a bit of sand.. Well, this is a used ammo can, what else would you expect? I'm extremely happy with this.
Read more

R. Jeffries
5.0 out of 5 stars What it says it is. Great value for the money if weight is not essential.
Reviewed in the United States on July 9, 2019
Verified Purchase
Received mine exactly as described. Gasket is not cracked or brittle. I used a little water-based lubricant just to hydrate it a bit more (which I recommend), and it seals great.

I underestimated the volume this thing has. Bought this to consolidate a bunch of low grade plinking ammo (~3200 .22LR) into a single container; only filled this thing up half way. This is a fraction of the cost of similarly sized plastic ammo boxes in my local shops.

As far as design, lock mechanism, etc., it's perfectly functional and sturdy. The only downside is weight of metal vs plastic, but that should be obvious going in.
Read more
11 people found this helpful
Helpful
Comment Report abuse

Howie'sgirl
5.0 out of 5 stars WOW!
Reviewed in the United States on May 19, 2020
Verified Purchase
Brand new with only scuffs from being stacked!
I was worried when I saw what some people received. I’m glad I took a chance on it. No respray. No trashed seal. Nice crisp stenciling. Literally brand new, never issued. You never know until try, which I advise you to do. Hopefully you will get the best like I did. It may be you don’t need it right now. You will. You know you will.
Read more

Leo Pham
5.0 out of 5 stars Some Nice Old Military Gear
Reviewed in the United States on May 4, 2020
Verified Purchase
It's exactly what the product description says, this is USED military gear that you can buy for the cool factor.

Mine was slightly rusty and had some lettering painted on the side, it gave the box a lot of character and was a little hard to open.

But my girlfriend didn't like it, and she made me return it. She asked why I paid that much for an old box... She didn't think it was cool...

But I didn't mind, I wanted a box that was already a little rough so I could toss it around. Put tools in it then toss it in the truck, or fill it with bullets and go to the range.
Read more
6 people found this helpful
Helpful
Comment Report abuse

MountainWalker
3.0 out of 5 stars Little expensive for what you get.
Reviewed in the United States on April 17, 2016
Verified Purchase
The box is used which is what I expected. Slight amount of rust inside. I just didn't expect it to be dented in such a way that it didn't seal properly. I did manage to get it straightend out to function properly. I'd purchase again if the price was $10-$15, not worth more than $20.
Read more
19 people found this helpful
Helpful
Comment Report abuse
See all reviews

Jeff
5.0 out of 5 stars Seems authentic
Reviewed in Canada on May 3, 2018
Verified Purchase
Ammo can came as described. There's some minor surface rust but as the discription states. It's used and previously issued. So it's expected. Aside from that. Not much more to say from that. I like the stencil on the outside of the can. Saves me from from having to label the can when storing ammo.
Read more

Matthew Cooke
5.0 out of 5 stars Its an ammo can.
Reviewed in Canada on November 13, 2019
Verified Purchase
It's an ammo can -- not really much to say besides it works as expected. If you are storing live ammunition in one of these, please note that in case of fire, this becomes a bomb. It is recommended to store live ammunition in a plastic container instead.

If you are storing ammunition in these containers -- warn your fire department in case of a fire.
Read more
Report abuse

Ben.B
5.0 out of 5 stars Good and still water tight/air
Reviewed in Canada on September 24, 2019
Verified Purchase
The seal is in good condition and I use it to keep a well stocked first aid kid with me in the car at all times throw some dessicants in and your set for long term storage.
Read more
Report abuse
See all reviews

Page 1 of 1 Start overPage 1 of 1
This shopping feature will continue to load items when the Enter key is pressed. In order to navigate out of this carousel please use your heading shortcut key to navigate to the next or previous heading.
Back
Next
Pages with related products. See and discover other items: Best Rated in Gun & Ammunition Storage & Safes, Best ammo bags for bullets