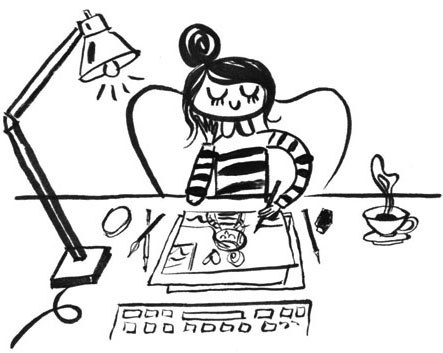 In today's busy world, finding a moment of peace and calm can be a challenge. Mindful coloring is a simple yet powerful practice that combines the proven, time-honored tradition of thoughtful meditation with the massive popularity of adult coloring books.

Perfectly sized to fit into a pocket or handbag, and printed on high-quality paper that will ensure hours of bliss, The Mindfulness Coloring Book—Volume Two is ready to help you de-stress wherever you go.

Emma Farrarons is a French illustrator and graphic designer. Born on the island of Cebu in the Philippines, Emma grew up in Paris. She illustrates and designs books, posters, and stationery. She was trained in illustration at the Edinburgh College of Art and École nationale supérieure des Arts Décoratifs. She completed a textile and printmaking course at Capellagården – School of Craft and Design in Sweden and has a particular love of pattern and fabric print. She is inspired by French, Scandinavian, and Japanese design. When she is not drawing and designing, Emma enjoys cooking, sewing, traveling, and practicing mindfulness. She lives in London with her husband and son.
Tell the Publisher!
I'd like to read this book on Kindle

4.6 out of 5 stars
4.6 out of 5
202 global ratings
How are ratings calculated?
To calculate the overall star rating and percentage breakdown by star, we don’t use a simple average. Instead, our system considers things like how recent a review is and if the reviewer bought the item on Amazon. It also analyzes reviews to verify trustworthiness.

acorn
5.0 out of 5 stars I didn't know anything about adult coloring books.
Reviewed in the United States on April 11, 2019
Verified Purchase
I didn't know anything about adult coloring books. Reviews mentioned type of paper, perforated pages, etc. I got 5! I chose how well I liked the content, rather than choosing perforation, etc. I searched amazon for hours the past couple weeks, pretty tiring. Then put some of the Cart coloring books into Saved for Later. I looked and re-looked! This was a win. The coloring books arrived today, and I gave all 5 of them 5 stars! Truly, each was a 5. I MUST SAY, I'VE BEEN SURPRISED AT REVIEWS WHERE THE PERSON SAYS THEY DIDN'T KNOW SOMETHING ABOUT AN ITEM, although it was mentioned in the ad. WELL, IT HAPPENED TO ME ON THIS ITEM! This is a SMALL , compact, mini book. It was delivered a couple hours ago, and I have kept looking at it. I realize I can easily take it on a plane with me! Also, I opened it at the midsection, and folded those 2 halves backwards. Then, I divided those halves, and bent those portions all the way back, and continued a couple more times with smaller portions. The binding stayed in tact, but it successfully "opened" this book for successful coloring when in a tight space like a plane. At first I wanted to return it - but a couple hours later I realized it's advantages. I like this coloring book more than Moments of Mindfulness
which also arrived today. I gave both a 5 rating. However, this Volume 2 ---for Busy People gets a super-high 5 rating from me!
Read more
2 people found this helpful
Helpful
Report abuse

JAS
5.0 out of 5 stars Relaxing
Reviewed in the United States on April 19, 2017
Verified Purchase
This small-format coloring book is great for traveling. I love the variety of intricate lines and nature-themed designs - this is exactly the style of coloring I enjoy. I've used colored pencils and markers (Tombow, Crayola, Artist's Loft) and have not experienced any bleed-through as the paper is thick enough for ink. If you layer on the color thickly with markers or use Sharpies, it will bleed through. For example, my Prismacolor markers bleed through this paper, so I don't use them. The book binding doesn't bother me; I find with fine-point markers and sharp colored pencils, I can color close to the binding without marking the neighboring page. Spiral-bound would probably be a better idea for this type of book, but I still enjoy it thoroughly the way it is.
Read more
One person found this helpful
Helpful
Report abuse

Vertigofire
5.0 out of 5 stars Perfect for my exam rooms!
Reviewed in the United States on April 13, 2019
Verified Purchase
I purchased several of these to place in my exam rooms in a medical clinic instead of outdated magazines. I love that it relaxes people while they wait. I also like the beautiful notes some patients have left for others to see. They were a little "too" popular at first and I lost a few to sticky fingers. Overall, I will continue to buy these when I run out. Great purchase in a handy little size.
Read more
Helpful
Report abuse

minac
3.0 out of 5 stars It's okay
Reviewed in the United States on July 1, 2019
Verified Purchase
Like most coloring books, the best picture is on the cover. There aren't many comparable pictures. The paper quality is great (I used watercolors and there's no bleeding) and the lines are solid, but the binding is tight, so it's difficult to color in the gutter. I'm glad I got it because it's a nice travel size, but there's room for improvement.
Read more
One person found this helpful
Helpful
Report abuse

Amazon Customer
5.0 out of 5 stars I loved the first volume
Reviewed in the United States on December 20, 2015
Verified Purchase
I loved the first volume, so I decided to buy the second volume. The designs in the first book were great, and I think the designs in the second volume are even better. They're more polished and refined overall, and there's more variety in subject matter and patterns. The only thing that I noticed that was different from the first book is the print quality. The design prints are slightly more pixelated for some reason. You can barely tell at a glance, but when you're coloring in the small details for hours, well, you start noticing the details. The first volume had very sharp and crisp lines, and I would've thought the second volume would have the same quality. You can't really tell after everything's colored in though, so the book still gets 5 stars from me.
Read more
8 people found this helpful
Helpful
Report abuse

Hannah Haas
5.0 out of 5 stars Perfect purse size to carry with on the go
Reviewed in the United States on February 27, 2016
Verified Purchase
I live this little book, have already ordered the second one. Only thing is I wish the pages were only one sided as my markers bleed through and I can't color the back side. But using my gel pens, colored pencils and crayons are perfect, live and learn.
Read more

5.0 out of 5 stars Perfect purse size to carry with on the go
By Hannah Haas on February 27, 2016
I live this little book, have already ordered the second one. Only thing is I wish the pages were only one sided as my markers bleed through and I can't color the back side. But using my gel pens, colored pencils and crayons are perfect, live and learn.
Images in this review

jnikburn
4.0 out of 5 stars I really enjoyed this coloring book
Reviewed in the United States on March 3, 2016
Verified Purchase
I really enjoyed this coloring book. The patterns are not too complex that they're hard to follow when trying to stick to a color scheme. The title is not misleading as I often use this book to calm my stress and anxiety by being mindful of the coloring. This was my first "adult coloring book" and I was not disappointed. The only reason I did not give this product 5 stars is because the book is much smaller than I expected it to be.
Read more
One person found this helpful
Helpful
Report abuse
See all reviews

Amazon Customer
4.0 out of 5 stars Good portable starter book
Reviewed in Canada on March 9, 2016
Verified Purchase
Really like this book. It is nice and compact and a good starter colouring book, not too detailed. Only issue is that some of the pictures go into the crease of the book and its hard to colour in. Otherwise really enjoyed it.
Read more
Report abuse

My friend liked it so much that I bought her a copy.

Page 1 of 1 Start overPage 1 of 1
Previous page
Next page
Pages with related products. See and discover other items: johanna coloring book, drawing people, color art book, colored pencil drawing, arts management
Back to top
Get to Know Us
Make Money with Us
Amazon Payment Products
Let Us Help You
EnglishChoose a language for shopping. United StatesChoose a country/region for shopping.
© 1996-2021, Amazon.com, Inc. or its affiliates