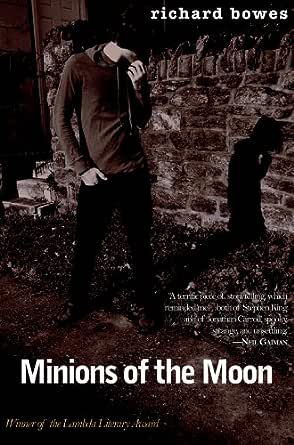 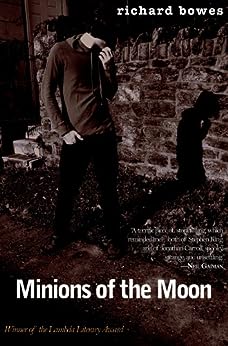 When customers seek their memories in Half Remembered Things, Kevin Grierson's New York shop, they gawk at the price tags attached to the toys of their childhood. Kevin reflects, "The past is always just a bit more expensive than we thought possible."

And so it is for Kevin, a successful middle-aged antiques dealer whose past is exacting a price: he journeys down dark memories of peddling his young body to strangers, destroying himself with booze and speed, striving to become predator rather than prey on the streets of New York in the 1960s. The problem, as he sees it, is that his Shadow--more than an alternate self but less than an independent doppelgänger--is the bad guy, the one who would bring back the old habits. But his Shadow is not purely evil, and Kevin is not purely good. The two of them have much to learn if they ever hope to be reconciled.

Minions of the Moon is an absorbing, beautifully wrought novel of dark fantasy--its complex web of stories told in interweaving strands, its dreamlike images balanced by a clean, matter-of-fact prose style. --Fiona Webster --This text refers to an out of print or unavailable edition of this title.

Kevin Grierson is just barely a '60s survivor, and the other him is even less so. The other him? Yes, for Kevin has a double he calls the Shadow, which was also what he called the alcoholic, abusive woman who often took the place of his mother. Not long after mother and her shadow died together, Kevin's started to "help" him, at first out of jams--like the one he got into getting blow jobs in dark corners of the Y--and then into drugs, drug dealing, and eventually big-time toping. Finally Kevin suppressed the Shadow, found a counselor who helped him sober up permanently, and got a profession as an antique toy dealer, thanks to George, who became his lover. Life continued to challenge him, of course. He and George separated, and George sickened with AIDS. An old friend's son was haunted by his dead addict father, and only Kevin knew and could help. Now a runaway teenager needs rescuing, especially since he has fallen in with the Shadow, who is back again, wraithlike with dissipation. Bowes deftly uses the addiction-as-doppelganger metaphor to add tension and verve to a rich, riveting story of dereliction and recovery. Superb popular fiction. Ray Olson --This text refers to an out of print or unavailable edition of this title.

"This is powerful fiction....For the elegance of the prose, the depth of the characterization, the sheer bravado and poignant grace of the story itself, Bowes stands...in a class of his own." --Charles de Lint

"Richard Bowes is one of the finest contemporary American fiction writers, in or out of the SF genre." --William Sanders

"A terrific piece of storytelling, which reminded me...both of Stephen King and of Jonathan Carroll, spooky, strange, and unsettling." --Neil Gaiman

"Gripping, hard-hitting, magical, and utterly unique, Minions of the Moon is one of the very best books I have read in years." --Terry Windling --This text refers to an out of print or unavailable edition of this title.

As a child growing up in Boston in the 1950s, Kevin Grierson discovers that he possesses an alternate self?a cold, callous Shadow-being who deals with the harsh realities and dangers of life and, more often than not, seems to leave chaos and trouble in his wake. Bowes's first novel, a reworking of a decade's worth of short stories, describes the sometimes poignant, sometimes disturbing life of a man who dwells on the edge of reality. Kevin's struggle to come to terms with his lover's slow death from AIDS and to find a way to reconcile himself with his doppelganger take on the mythic overtones of a modern-day fable in this solid piece of magic realism suitable for large libraries.
Copyright 1999 Reed Business Information, Inc. --This text refers to an out of print or unavailable edition of this title.

Life can be brutal for a boy growing up on the streets of Boston at mid-century, especially if he's gay and his mother's crazy, and particularly if he's haunted by a doppleganger, a phantom double. Kevin Grierson grew to adulthood in a tough Irish-American family with uncles who were prone to beat him up for his own good. Making it through college and moving to New York, Kevin tries unsuccessfully to balance a career writing advertising copy with a secret existence centered on drugs, alcohol and promiscuous, tawdry, often dangerous sex. His doppleganger lurks constantly in the background, manifesting itself whenever Kevin gets in trouble, giving him bad advice, hijacking his body for his own ends whenever he's too drunk or too stoned to resist. As the years go by, Kevin lives from one crisis to the next, struggling constantly with both his double and his addictions. Then he discovers that he's not alone. There are other people with supernatural powers in the world, and some of them aren't very nice. Worse still, there's a mysterious group called the Sojourners who seem interested in collecting Kevin and his double for their own secret, presumably unwholesome, purposes. In his first novel in 10 years, Bowes (Feral Cell) has produced a well-written and unusually gritty urban fantasy of a sort likely to appeal to fans of the work of Charles de Lint. Although the novel takes place over a period of decades, there isn't really much plot here. Grierson, however, is a fascinating character whose life consists of a series of small, grim and involving urban adventures.
Copyright 1998 Reed Business Information, Inc. --This text refers to an out of print or unavailable edition of this title.
Read more