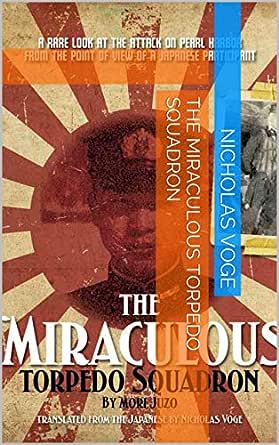 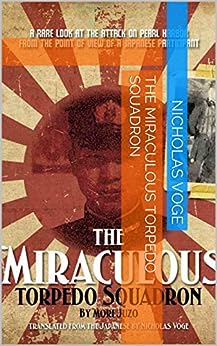 4.3 out of 5 stars
4.3 out of 5
200 global ratings
How are ratings calculated?
To calculate the overall star rating and percentage breakdown by star, we don’t use a simple average. Instead, our system considers things like how recent a review is and if the reviewer bought the item on Amazon. It also analyzes reviews to verify trustworthiness.
Top reviews

IMHO
5.0 out of 5 stars Like Having a Front-Row Seat on the Opposition Side in WWII
Reviewed in the United States on November 27, 2019
Verified Purchase
We are so used to thinking of the Japanese as exceedingly reserved, polite individuals that Juzo Mori's simple, honest, often earthy account comes both as a surprise and a very refreshingly memorable narrative- so much so, that even though he put a torpedo into the U.S.S California at Pearl Harbor, we find ourselves actually cheering for him at times. The way he takes us from the pride and flush of victory in the early days to being reduced to fighting for grubs and larvae along with Japanese ground forces after being shot down at Guadalcanal is utterly gripping, as is his struggle for survival after the war, when, having had a hand shot off, he is virtually unemployable in ruined post-war Japan.
Read more
One person found this helpful
Helpful
Report abuse

mostly Cajun
5.0 out of 5 stars View from the other side
Reviewed in the United States on March 10, 2015
Verified Purchase
I enjoy and gain inspiration from reading the stories of men fighting for their countries. This book is a view of a Japanese pilot's experiences. He gets plenty of the action in the story as well as plenty of the story away from the battles. You learn that despite how WE felt about 'the Japs', these were men like ourselves, with friends and family and fears and aspirations not unlike those of my father, a veteran of the US Navy in the Pacific himself.

The story gives many insights into the equipment, training, tactics and executions of the Japanese side of the war, making it a good reference. It also gives Mori's view of the strategies from his position far down the chain of command.

This is a book worth reading for the war history aficionado.
Read more
9 people found this helpful
Helpful
Report abuse

j ferguson
5.0 out of 5 stars Excellent translation of a very interesting memoir
Reviewed in the United States on February 22, 2015
Verified Purchase
This is a really excellent memoir by a Japanese Torpedo Bomber pilot who flew in China before the start of the Pacific War, Pearl Harbor, Midway and Guadalcanal. The translation is both thoughtful and I think accurately portray's Mori's approach to his responsibilities. the translator has dealt with Japanese vernacular which would have seemed peculiar, maybe quaint to US readers by using present-day slang. I would suggest if he revisits his translation, he might tone it down a bit.

I hope this book is a great success and that it encourages the translator to take on other works from that period which are unavailable in English.
Read more
15 people found this helpful
Helpful
Report abuse

C. G. Telcontar
3.0 out of 5 stars From China to Pearl Harbor, Midway and Guadalcanal
Reviewed in the United States on June 5, 2015
Verified Purchase
Originally published in 1954 in Japan, just recently available in English, this memoir is a valuable addition to the slim number of memoirs from members of the Imperial Japanese military during WW2. While the author is not a terribly deep thinker, nor are his interpretations of some strategy moves correct, it still has the raw impact of "I was there, I did this, and then everything blew up" kind of reporting that stands the test of time. Mori shows off the Japanese fascination with battleships even while he is dedicated to the weapon system that will dominate the war: air power. His early experiences in China are illuminating, although I wish he had gone into more detail about his training rather than repeat several times how nervous and excited he was.

He also struggles with the Japanese Bushido demand of living every day prepared to die and several times has to confront the unwritten rule that if damaged in combat, he is supposed to take his own life rather than bring the aircraft back and thus preserve his skills for further use. That is the China experience, but it then directly conflicts with his Pearl Harbor and Indian Ocean combat when he ditches his aircraft successfully three times and is plucked out of the water by plane guard destroyers. It's an odd mixture, and something that sticks in the reader's mind. I

This does not aspire to the top tier of Japanese memoirs, which in my mind consist of just two: Japanese Destroyer Captain and Samurai!, but it is far better than I Boat Captain and Kamikaze Submarine.
Read more
6 people found this helpful
Helpful
Report abuse

Jerry
5.0 out of 5 stars A good read and a learning experience.
Reviewed in the United States on September 4, 2015
Verified Purchase
This author gives us a comprehensive review of his experience as a Torpedo Bomber Pilot from his pre-war enlistment in the IJN to his retirement. I found it to be quite detailed in spots and therefore very interesting for me. It appears the English version was done at a much later date than the original and interpreter has injected some of his/her own colloquialisms but it does not detract from the author's story. To view the war from the other side gives us the chance to see what they were thinking at that time.

It was enlightening to see the dissatisfaction of the author with many of the decisions made by his superiors; not unlike the griping every GI has done. It shows that fighters are alike in that respect the world over.

All in all, a very enjoyable and enlightening read.
Read more
4 people found this helpful
Helpful
Report abuse

Jim, Stuart, FL
5.0 out of 5 stars History of the Japanese Naval Air War
Reviewed in the United States on April 26, 2020
Verified Purchase
This is an amazing historical account of the air war as seen by a Japanese Naval torpedo bomber pilot who personally flew his aircraft from the carrier Soryu in the Pearl Harbor attack and the Battle of Midway. His flying days ended when he was severely wounded and lost his right hand in the skies over Guadalcanal. Any student of WWII battles early in the Pacific War needs to see the history from the eyes of a Japanese pilot who participated in those famous battles.
Read more
Helpful
Report abuse

COL Tom Pool
4.0 out of 5 stars Superb story, very well written
Reviewed in the United States on March 19, 2016
Verified Purchase
I would give this book five stars but for one irritating feature that might not bother others. It bugs me when the translation includes American slang. Obviously the author did not use that slang expression, and to me it just reminds me that some guy I've never heard of is actually translating this for me. It seems completely out of character for the original author to be using slang or an idiom like that. Otherwise, it is a superb story. I have been reading military history for 50 years, and I would put this book on the top shelf. I consider it comparable to Sakai's book and superior to Galland's and many other WWII aviation books. Even my wife loved this book, and she never likes military history. To read this book is to fly alongside someone who is describing everything he saw when he bombed Pearl Harbor and attacked the U.S. carriers at Midway. Then shot down and starving on Guadalcanal before his rescue. Just the best.
Read more
One person found this helpful
Helpful
Report abuse
See all reviews

veritas
4.0 out of 5 stars If you enjoy biographical accounts, a must read for anyone interested in IJN aviation of this period
Reviewed in Australia on January 14, 2020
Verified Purchase
A personal account of the author's life and service in the IJN. Mori took part in the Pearl Harbor and Midway campaigns as well as Guadalcanal. There's a dearth of material generally relating the Japanese perspective land, sea or air, so this is definitely a worthwhile read for anyone interested in IJN of this period. It's not a strategic tome, nor is it in the league of Galland's "The First and the Last", but it won't exactly break the bank either.
Read more
Report abuse

Craig66
5.0 out of 5 stars Excellent and a rare side of war in the Pacific.
Reviewed in Australia on December 9, 2016
Verified Purchase
A rare insight into the mind of a Japanese naval aviator.

An excellent book for any military history buffs.

I have read hundreds of military related books, but only 2 or 3 by a Japanese author- they are rare!

Also worth reading is The Bone Man of Kokoda, another Japanese authored book. Saburo Sakai's book is also very good.

I would like more detail on his post war life, but perhaps this was unavailable.
Read more
Report abuse

Barry S
5.0 out of 5 stars Good yarn
Reviewed in Australia on March 21, 2017
Verified Purchase
The Pacific War from t'other side's point of view. Some of the translation uses too much American slang but otherwise enjoyable reading.
Read more
Report abuse

Jeff O'Brien
4.0 out of 5 stars Good read
Reviewed in Canada on April 6, 2015
Verified Purchase
Starts off very well but lags toward the end. Interesting to read about Pearl Harbour and Guadalcanal from the enemy perspective.
Read more
Report abuse
See all reviews