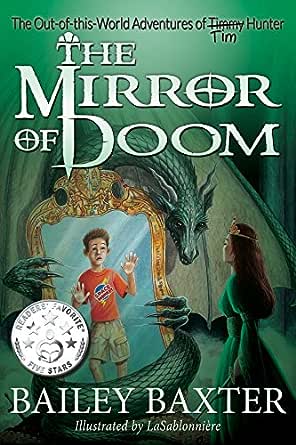 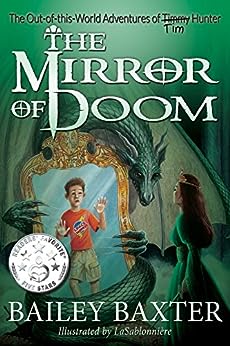 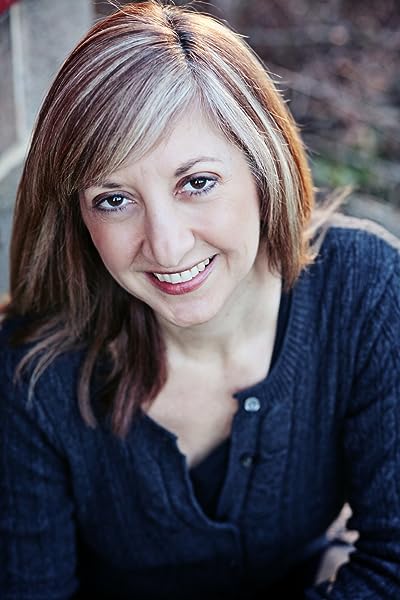 "Without a doubt, The Mirror of Doom is the most delightful children's story I have read in some time." - Readers' Favorite

Bailey Baxter's tale of typical teens was written in a realistic fashion up until the fantasy realm takes over, when they are magically transported to another world. Tim's humorous narration of the story gave me cause to chuckle in many instances, as he told things from a twelve-year old's point of view, inclusive of his personal analysis of each of the other characters in the story, holding nothing back. All three of the children are initially shown as quite self-absorbed and selfish, but their emotional growth and respect for one another is evident as they face each challenge head-on. Bailey Baxter is a writer with great talent and has a flair for telling stories of intrigue to readers of all ages. I recommend The Mirror of Doom to all readers who enjoy fun, action, sci-fi, fantasy, and a major dose of comedy in their magical adventures.

The Mirror of Doom is my first published book -- although I've been writing stories for as long as I can remember. I took my relationship with my siblings growing up, mixed in my love for fantasy and fairy tales, added some hair-raising adventure, and voila! I ended up with a story I hope kids of all ages will love.

Bailey Baxter is the pen name of a somewhat successful copywriter who writes online “junk mail” for health supplement companies. She lives in Asheville, NC with a mischievous Shih-tzu named Lucy. This is her debut children’s novel. --This text refers to the paperback edition.
Read more

Advanced Sarcasm
5.0 out of 5 stars I enjoyed this book immensely
Reviewed in the United States on September 30, 2016
Verified Purchase
OK, I am actually married to ACTMOM, but I read the book and I'm the resident reader and sci-fi / fantasy buff. I enjoyed this book immensely. It's a fast read but not too simple- I'm in my 40's. Good vocabulary, and written first person using expressions you'd expect from a twelve year old (Tim, the protagonist). While it might remind you of some other works of fantasy, this is very much its own story, with some clever twists thrown in. The chapters are just the right length for knocking out one or two when you have a few minutes. Illustrations are present, some really nice cover art as well as some interior drawings with funny little captions. Long story short, I recommend The Mirror of Doom, I look forward to the probable sequel, and I am even going to buy a couple copies for a friend who teaches to share with his class.
Read more
4 people found this helpful
Helpful
Report abuse

R3
5.0 out of 5 stars The Mirror of Doom
Reviewed in the United States on October 4, 2016
Verified Purchase
I picked up this book for ME, not a child because I like reading kids' books. You don't have to worry about the "heat" level or so many other things that plague adult books. This was a great read, but leaves you with a cliffhanger--not in a bad sort of way like many series. The story that the author set out to tell is complete, but she entices you to hurry up and buy the next in the series. Alas, it is not available yet.

I come from a family of many children, so the author has sibling relationships pegged--both the fighting and concern. It's the attitude, "I can call you names and pick on you, but let anyone else outside the family try, and watch us band together."

Rey G
5.0 out of 5 stars A great adventure, filled with good, clean fun!!
Reviewed in the United States on November 27, 2016
Verified Purchase
A great young persons book filled with non stop adventure & good clean fun! Sibling rivalry abounds as they join forces with others in a seemingly impossible quest. Great way to show young folks that you can "rise to the occasion" when needed & accomplish more than you ever expected. The book leaves you wanting more! Parents will be pleased to know there is nothing objectionable in this delightful book. Kudos to you Bailey Baxter! Especially since this is your first book. Looking forward to the next installment.
Read more
4 people found this helpful
Helpful
Report abuse

Connie Huddleston
4.0 out of 5 stars Cliffhanger!
Reviewed in the United States on November 7, 2016
Verified Purchase
The Mirror of Doom is a delightful adventure story. The characters are imaginative and relate to one another just as siblings do. The adventure is full of fun, humor, and danger. I’m sure children will enjoy this book. My reason for a four star rating is the ending. I don’t like books that leave a plot twist hanging to force the reader into reading the second book in the series. Especially in children’s books! C.M. Huddleston, author of the award-winning “Greg’s First Adventure in Time”
Read more
Helpful
Report abuse

Amazon Customer
5.0 out of 5 stars Fun, Adventurous and Enjoyable Read
Reviewed in the United States on September 22, 2016
Verified Purchase
I bought this book as a suggestion from a friend for my granddaughter. But I always read books that I give to her,first. I found this book to be fun, adventurous and enjoyable. This book will give your kids a love for reading.
Read more
4 people found this helpful
Helpful
Report abuse

John Keever
5.0 out of 5 stars Wholesome, Family Friendly, Contemporary Fairy Tale for Young Readers
Reviewed in the United States on September 11, 2016
Verified Purchase
Originally I was going to title this review, “An Accessible Narnia” because of its obvious parallels to that novel. But by the time I finished the book I realized this tale, being much easier to read than the C.S. Lewis tome, is quite different - and while there are similarities, they are superficial and share much more in common with traditional fairy tales.

I purchased Mirror Of Doom for an eight-year-old family friend who happens to read at a much higher level, and is quite fond of children’s adventure and fantasy literature. I also picked up a copy for myself (I’m much older than 8) on Kindle. I read the book over a holiday weekend and wanted to share with other readers what I found.

I would categorize this work as a contemporary fairy tale fantasy adventure.

All the elements of fairy tale fantasies are present, such as a magic mirror that transports the characters to a magical and distant land populated by Kings, evil Queens, ambitious Princes, dwarves, wicked creatures called Galrogs and even a real fire-breathing dragon!

The story is told through the eyes of Timmy (scratch that … make that TIM) Hunter, a scrawny, scrappy young boy who passes through a magic mirror from his present day existence, entering a fantasy world of medieval proportions, complete with the fantastic creatures and characters mentioned above.

He’s immediately followed by his annoying (to Tim) older sister Kat and their older, star athlete brother Ron. They learn their only way back through the mirror to home is to commit a worthy act of bravery.

Soon, they are off on a mission, meeting up with Prince Gavril, a no-nonsense leader and son of the ousted King of Tryton. Along the way they pick up a friend of the Prince’s, Beriman a worldly dwarf, and experienced soldier-type with considerable sword-fighting skills.

Beriman is blessed with the one of the most dramatic moments and memorable quotes in the book: “Dwarves never surrender!”

There’s a lot to like about Mirror Of Doom. It’s written in a whimsical, fun style, punctuated by comical moments, mostly having to do with the interaction between the siblings and the sometimes “fish out of water” moments because of the stark differences between home and this new reality.

I also liked the fast pace of the novel … not a lot of drawn-out exposition. Everything you need to know to follow the story is revealed either in conversation or within context of the events unfolding.

There are Easter eggs in this story too … such as conventional fairy tale tie-ins between this story and several Brother’s Grimm tales. You’ll see what I mean when you read it, but I thought those tie-in references really added a dimension to the story - wholly original.

I won’t spoil the story by revealing any more detail.

If you’re a fan of children’s lit, fairy tales, Narnia or even Tolkien-esque adventures, you’ll love this book, it’s wholesome, family friendly entertainment you can give to a young reader with absolute confidence they’ll enjoy the story without fear of corruption by bad language or extreme graphic content.

Mirror Of Doom is a fun, fast, and thoroughly enjoyable read. Hope you like it as much as I did.

T. Bramhall
5.0 out of 5 stars A fun book that you won't want to put down.
Reviewed in the United States on September 23, 2016
Verified Purchase
What's worse than getting into a fight with your older sister? Having your uncle push you into a magic mirror and getting stuck in a strange land.

I was excited to get chosen to be a previewer for the Mirror of Doom. What a fun book! Now, my son and I are reading it as one of his homeschool assignments. :)
Read more
Helpful
Report abuse

Cathryn Ann O'Gara
5.0 out of 5 stars Couldn't put it down
Reviewed in Italy on January 10, 2017
Verified Purchase
I really enjoyed this story. It was original and I look forward to reading it with my students. I liked that the narration was from Tim's perspective.
Read more
Report abuse
See all reviews