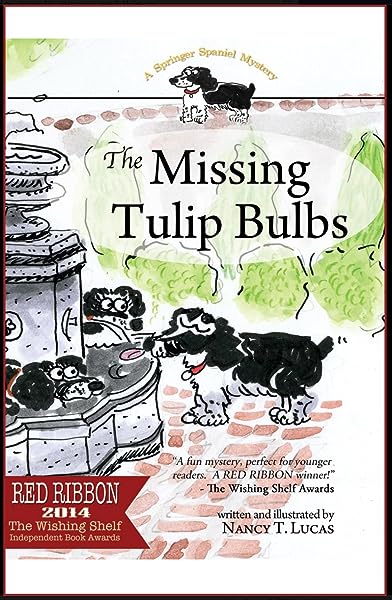 Nancy Lucas lives in Charleston, SC. Scout is her favorite Springer Spaniel and she insists on writing silly stories about his capers.
Start reading on your Kindle in under a minute.

4.4 out of 5 stars
4.4 out of 5
5 customer ratings
How does Amazon calculate star ratings?
Amazon calculates a product’s star ratings based on a machine learned model instead of a raw data average. The model takes into account factors including the age of a rating, whether the ratings are from verified purchasers, and factors that establish reviewer trustworthiness.
Top reviews

Chrystal
5.0 out of 5 stars Cute and Charming Tale
Reviewed in the United States on February 14, 2012
This short little tale was absolutely amusing and perfect for young readers. It is a great size to read for bedtime stories, isn't frightening and entertaining to even adults! Scout is a friendly little dog that has many neighborhood friends with different personalities. It is a cute story about doggie perception that few ever think about, such as thinking that a microchip may be a bit crunchy. Too funny! The story is short and sweet with a cliff-hanger ending leading to the introduction of the next book in the series.

Within the story itself, you meet a large variety of characters, from cats that live with cat ladies (who, according to Scout, do not count!), to wharf rats, a boa constrictor and a chatty, fat possum who wants nothing more than to eat his way through the tale. Let's not forget the dogs! Ms. Lucas introduces a variety of breeds (including, naturally, Boston Terriers and Springer Spaniels) with funny little personalities. Each dog is described in both appearance and personality, making you feel as if these were your own neighbor's dogs - including the annoying yappy dogs and the dog that always roams the streets without a leash or owner. Scout is cunning and uses everything he's got in his little Spaniel body to find his two friends when they go missing.

Children (and adults!) will not get bored with overly descriptive and pointless paragraphs, but instead will look forward to "just enough detail" at "just the right time." This is perfect for children that read at the first to fourth-grade level (depending on the individual child) because it introduces vocabulary that one may not be familiar with (e.g. Claustrophobic), and gives the definition shortly afterward. It's important to have a couple of the "larger" words defined within the story so that children do not have to stop and grab a dictionary at every page turn. Perfect execution!

This book is definitely worth reading to your children (or having them read by themselves if they are old enough). Very cute! I cannot wait until I read the rest of the series to my children. They loved the idea of the snarky little squirrel that taunted Scout.

I received this book in a giveaway provided by Goodreads.com. I was not paid or obligated to submit a review and did so only based on my personal experiences with this book.

Heather (Davidson) Maneiro
3.0 out of 5 stars A Gem for Young Dog Lovers
Reviewed in the United States on May 20, 2012
Life as an only dog can be lonely as Scout well knows. So when Scout's newest friends and neighbors, Ike and Clyde, are found to be missing, Scout is soon on the case. Scout not only needs to uncover what e-mail (apparently important in Mumma communication) is, but he must also set aside his fears and expand his friendships in the animal kingdom to hasten his search.

This easy-to-read is a good transitional text for early readers transitioning from picture books to chapter books. Dog lovers will be especially happy to find this book; however, the humor may be a little to subtle for many early readers.

This book was received as a first-reads giveaway on Goodreads.
Read more
One person found this helpful
Helpful
Comment Report abuse

SpringerMystery
5.0 out of 5 stars Midwest Book Review
Reviewed in the United States on February 18, 2012
"The Missing Boston Terriers of Smith Street" is the first in a juvenile series about a Springer Spaniel dog detective named Scout, who does his canine sleuthing in Charleston, South Carolina. Scout knows all or most of the dogs in his neighborhood, but he tests his knowledge, his doggy network of friends, and his nose in his madcap search for the lost Boston Terriers, Ike and Clyde, whose reward poster his Mumma reads to him. A canine search of the Charleston peninsula's storm drains and sewers takes Scout to some rather interesting, even unsavory places. Fortunately he is resourceful and alert, and able to enlist the assistance of such unlikely friends as Chisolm, a talkative possum who adores chocolate and snacks. After a few scary encounters with sewer rats, a boa constrictor, and a full dunking in the river, Scout manages to rescue Ike and Clyde and snag them a safe ride home. Even a Doggy party is part of the action in "The Missing Boston Terriers of Smith Street!" This series, with five proposed comic illustrated volumes to come, promises to be enticing to comic canine mystery lovers age 8 and up.
Read more
Helpful
Comment Report abuse

Karl B. Smith
5.0 out of 5 stars Nancy Lucas" debut
Reviewed in the United States on September 27, 2011
Children and dog lovers of all ages will enjoy this charming story set in Charleston's historic downtown. Readers will be captivated by the concisely and humorously rendered illustrations which accompany this fast moving tale. Light hearted and quirky, this small, but engaging book is sure to wet your appetite for reading more editions in the Springer Spaniel Mystery series. You are certain to fall in love with the dog, sleuth, Scout as he searches the neighborhood for clues and encounters all sorts of interesting critters along the way. Nancy Lucas is off and running with this the first installment of what promisee to be a stellar career as a children's book author and illustrator. Bravo! and I look forward to "A Ghostly Tail".
Read more
Helpful
Comment Report abuse