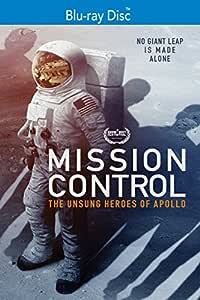 David Fairhead (Director, Writer), Documentary Cast (Actor) Rated:
NR
Format: Blu-ray
4.3 out of 5 stars 69 ratings
Available at a lower price from other sellers that may not offer free Prime shipping.

At the heart of the Apollo space program and a remarkable decade of achievement was the team who worked in Mission Control.They were born against a backdrop of economic turmoil and global conflict. Some came from a rural lifestyle little changed from the 19th century. Others grew up in a gritty, blue-collar America of mines and smoke stacks. They ranged from kids straight out of college to those toughened by military service. But from such ordinary beginnings, an extraordinary team was born. They were setting out on what JFK called: “The most hazardous, dangerous, and greatest adventure upon which mankind has ever embarked” and through their testimony – and the supporting voices of Apollo astronauts and modern NASA flight directors – the film takes us from the faltering start of the program through the Mercury and Gemini missions, the tragedy of the Apollo 1 fire to the glories of the Moon landings.

A well-crafted, revealing British documentary reuniting the surviving team members entrusted with safely taking astronauts to the moon and back. Although these hidden figures are exclusively male and almost entirely Caucasian, there s still much to find uplifting. --L.A. Times

An engrossing behind-the-scenes look at the flight controllers and support crews that helped America win the space race. --Variety

An absorbing document of the Space Race of the Sixties (aka another endless instance of global dick-measuring), and the engineers who put a man on the moon (supposedly). --The Austin Chronicles

Colin BrownTop Contributor: Photography
VINE VOICE
5.0 out of 5 stars A truly epic documentary detailing the early years of Mission Control
Reviewed in the United States on July 12, 2017
Verified Purchase
Mission Control is brought to you by the same team that brought you Last Man on the Moon, the excellent documentary about Gene Cernan. This time however the team are tackling the not insubstantial task of what Mission Control is, how it got started by Chris Kraft and the story of the early days of Mission Control from the Mercury days through the moon landings of the Apollo flights.

Just like their last release, the cinematography is excellent combining interviews with both those who served at Mission Control during the early days and also those who are currently serving in Mission Control. Interviews with the big names that you would expect are of course present including the man who started it all off, Chris Kraft and his disciples of Glynn Lunney and Gene Kranz as well as people who served in the trenches.

Mission Control really got famous to the modern era through the Apollo 13 film and made Gene Kranz a household name. However apart from a couple of names, not much was detailed about Mission Control and how critical they were in not only the Apollo 13 mission but in all of the missions. Without Mission Control, Apollo 11 would have aborted when they received the program alarms. Apollo 12 would have aborted on take-off when they got hit by lightning and lost the platform. Apollo 14 would never have landed on the moon with the docking problem between the CSM and the LEM etc. etc.

The Mission Control documentary takes you through some of these key decision with interviews of the people who actually made the decisions or were there at the time. It details the history and the code of ethics that arose after the Apollo 1 fire.

You do get a few bits of bonus material on the Blu-Ray however not that much, especially considering the amount of material they would have shot to make the movie. That would be my only criticism on this movie and even then it's a stretch.

It was a little bittersweet to see Gene Cernan make an appearance in the movie.

This is truly an outstanding and extremely interesting documentary that everyone with a passing interest in space, nasa or the moon landings should watch.
Read more
10 people found this helpful
Helpful
Comment Report abuse

Tom Hoots
VINE VOICE
1.0 out of 5 stars THIS IS NOT A COMMERCIAL BLU-RAY DISC.
Reviewed in the United States on July 10, 2019
Verified Purchase
I will be trying to return this useless chunk of plastic. Apparently, it is some kind of "BD-ROM" recording, and it did not work in any of the players I have, including the following:

If you look at the 'playing' side of the disc, it is not silver in color, like any other commercial Blu-ray disc, but rather, it is a very dark color. Chances are absolutely excellent that this won't work in any device you have, either.
Read more
4 people found this helpful
Helpful
Comment Report abuse

Roger Balettie
5.0 out of 5 stars “Greater than the sum of our parts…”
Reviewed in the United States on September 7, 2017
Verified Purchase
There have been numerous documentaries made over the years that capture the events of the early days of the US Manned Space Program. Some of them are truly excellent… others, well… it’s obvious they were rushed out just to fill a void.

I can’t say enough about this movie — there have been documentaries before, and even “Apollo 13” did a great job showcasing the Flight Controllers in Mission Control… but nothing has done such an amazing job of presenting the story, in the words and interviews of the actual Flight Controllers who made the Apollo Program the success that it was.

I was highly fortunate to work with and for some of these same individuals… these men who shaped not only NASA’s early history, but indeed the overall culture and operating environment of Mission Control that we were to carry on years later.

Go. Get this. Watch it.
You won’t regret it.
Read more
7 people found this helpful
Helpful
Comment Report abuse

Janet Dickey
5.0 out of 5 stars Excellent!!
Reviewed in the United States on April 14, 2017
Verified Purchase
Excellent !!! Probably the best and most accurate documentary I've seen. Great for these people to share their real live involvement in the American space program. I am old enough to remember so much of what they share. Hopefully, today's and future generations will watch this and have a greater appreciation of just how historical this was.
Read more
11 people found this helpful
Helpful
Comment Report abuse

coyotesings
4.0 out of 5 stars Interesting documentary about the Gemini and Apollo space missions. ...
Reviewed in the United States on July 7, 2017
Verified Purchase
Interesting documentary about the Gemini and Apollo space missions. I've seen some of the footage over the years but nothing this in depth. It is more about the people behind the scenes than the astronauts. If you've seen any number of movies about the early days of space flight then you will be familiar with many of the faces and names. Lots of grainy old footage from the 50's, 60's & 70's and interviews with many of those who worked tirelessly to reach space and beyond from behind a desk.
Read more
One person found this helpful
Helpful
Comment Report abuse

Kelmo
4.0 out of 5 stars I can't express how much I love this movie
Reviewed in the United States on February 13, 2018
Verified Purchase
I can't express how much I love this movie. It is the story of the other half of the space race. The men in the trenches who were the backbone of NASA. Their story needed to be told, and it was told beautifully. The ONLY reason I gave this four stars out of five is because I have ordered and returned two Blu Ray disks from Amazon and both freeze during the Apollo 8 segment at exactly the same place. It's really frustrating. I finally gave up trying to get a copy that worked. So, now I ended up watching it on streaming Netflix. I guess the second DVD was better than the first DVD I bought of this movie. That DVD wouldn't boot up on two of my DVD players. Thank you for the beautiful film, but wish I had a clean, working DVD.
Read more
Helpful
Comment Report abuse

LUISZ
5.0 out of 5 stars A must see movie !!!!
Reviewed in the United States on June 18, 2020
Verified Purchase
This is the story of how "Mission Control" was created with the challenges these "unsung heroes" had to face to land the Apollo missions on the moon..including the "Apollo 13" events those handled for the safe return of the Odyssey to the earth. Think of how the technology was 50 years and how this group of engineers and specialists made it happen !!!
Read more
Helpful
Comment Report abuse

George R. Kasica
5.0 out of 5 stars Excellent movie highly recommended
Reviewed in the United States on July 15, 2017
Verified Purchase
Excellent movie. The ground based version of "Apollo-13". Definitely something worth watching. Shows whjat was done and how to solve prblems to safely complete the missions. Fantasdtic history that I'd highly recommend.
Read more
2 people found this helpful
Helpful
Comment Report abuse
See all reviews