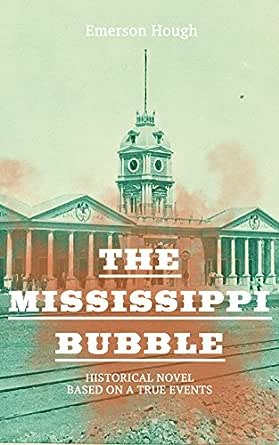 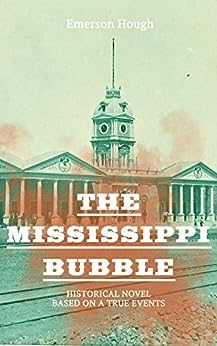 The Mississippi Bubble (Historical Novel Based on a True Events): Thriller Kindle Edition

Emerson Hough (1857-1923) taught school before studying law at the University of Iowa, graduating in 1880. Hough was admitted to the bar in 1882 and practiced law at White Oaks, New Mexico, but found it had no appeal for him. He turned to a literary career by taking camping trips and writing about them for publication. His body of work eventually included 27 novels and hundreds of short stories and articles.

Hough's early works included "The Singing Mouse Stories," for children, in 1895 and the nonfiction "The Story of the Cowboy" in 1897. He had his first major success in 1902 with the novel "The Mississippi Bubble," which became a best-seller. "The Way of the West" followed the next year. --This text refers to an alternate kindle_edition edition.

2.5 out of 5 stars
2.5 out of 5
5 customer ratings
How does Amazon calculate star ratings?
Amazon calculates a product’s star ratings based on a machine learned model instead of a raw data average. The model takes into account factors including the age of a rating, whether the ratings are from verified purchasers, and factors that establish reviewer trustworthiness.
Top reviews

Customer Review
2.0 out of 5 stars This book is fiction.
Reviewed in the United States on December 5, 2012
Verified Purchase
This is a work of fiction about Law's Mississippi Scheme. Essentially, this book is a defense of John Law. Any non-fiction book about Law's Mississippi Scheme would likely be more informative and more interesting.
Read more
2 people found this helpful
Helpful
Comment Report abuse

Albert H.Fritzsche
1.0 out of 5 stars One Star
Reviewed in the United States on September 24, 2017
Verified Purchase
Not the author I thought.
Read more
Helpful
Comment Report abuse

Scrapple8
3.0 out of 5 stars For Faith, Love, and Hope
Reviewed in the United States on December 24, 2014
The historical novel 'The Mississippi Bubble' by Emerson Hough was well-received by the American reading public upon its release, ranking 4th in sales among all American novels that debuted in 1902. The book is a fictional account of the life of Scottish financier John Law, who reached his professional apex as the Controller General of Finances in France during the early 18th century. Law was appointed by Duc d'Orléans, the regent for King Louis XV, to implement his financial plan for the French economy, starting with the notes circulated by the public.

Hough drew on a book by Charles Mackay called 'Memoirs of Extraordinary Popular Delusions and the Madness of Crowds' for his background knowledge of John Law and the Mississippi Bubble. The colorful portrait of John Law by Mackey forms the character used by Emerson Hough in 'The Mississippi Bubble.' Both books - the Mackey book and Hough's novel - are available for free as e-books from Project Gutenberg.

Readers who want to make up their own minds about John Law will be disappointed by reading this novel alone. Still, the novel has some merit. The story establishes a point of view sympathetic to Law, through fabricated events and a generous consideration of Law's policies. Hough suggests that the Duke of Orleans and his advisors, D'Argenson and Dubois, were the parties responsible for the Mississippi Bubble by their mismanagement of Law's plan.

The biography of John Law on Wikipedia has no mention of Law visiting America. The events of Book 2 in the novel appear entirely invented - however, Hough offers some excellent writing in this part of the novel, describing the American frontier from the viewpoint of one with a wealth of background knowledge of life on the frontier.

Some may take exception to Hough's characterizations of 'hook-nosed Jews,' but such were the times. People make similar charges of Booth Tarkington, for his novels don't survive today's tests of political correctness. If those sorts of things bother you, then don't read the book.

The subprime mortgage meltdown of 2008 brought the topic of investment bubbles back into public consciousness. The original version of this book was published in the wake of the 1901 stock market bubble, created when Edward Harriman and associates of J. Pierpont Morgan bid up the price of Northern Pacific stock.

No topic has been written about like the American West, so invariably some of the famous, earlier scribes have been replaced by more modern voices. Emerson Hough is an underrated chronicler of the American West, and his novels and historical works deserve a second look. With The Mississippi Bubble available for free on PG, maybe scholars can take a second look on this novel. I enjoyed reading the novel.

This review is based on the original version of The Mississippi Bubble published in April 1902 by the Bowen-Merrill Company of Indianapolis, IN. There was a version of this book available for free from Project Gutenberg that had about thirty minor errors and variances with the paper version of the book. Those errors have recently been corrected by Project Gutenberg. The only real difference between the e-book from PG and the paper book, besides the medium, is the picture in the paper copy of the novel in Book 3, Chapter 4 is missing from the e-book from PG. The free version of the book from Amazon is not updated with the latest batch of corrections that have been installed by PG.