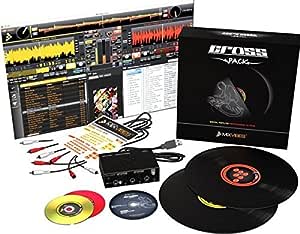 3.9 out of 5 stars
3.9 out of 5
10 global ratings
How are ratings calculated?
To calculate the overall star rating and percentage breakdown by star, we don’t use a simple average. Instead, our system considers things like how recent a review is and if the reviewer bought the item on Amazon. It also analyzes reviews to verify trustworthiness.

Travis
5.0 out of 5 stars fantastic
Reviewed in the United States on June 14, 2013
Verified Purchase
Mix vibes is awesome. Comparing serato,tracktor, mix vibes offers more . You have more settings that you can tweak. I have this running so on point it is exactly like playing vinyl. The GUI is simple and clean. The price is awesome. I recommend that you create a dedicated audio laptop no matter what you buy . You must get the DPC latency down
Read more
6 people found this helpful
Helpful
Comment Report abuse

C. Davis
4.0 out of 5 stars Great Product!
Reviewed in the United States on May 14, 2014
Verified Purchase
Does just what I need it to do and I'm sure it can do more if I explore more. Any mobile DJ should have this! I had a few snags with the set up because I didnt read the manual completely, but with all the help in the forum and reading my manual thoroughly, everything is working good. Practice makes Perfect
Read more
2 people found this helpful
Helpful
Comment Report abuse

Zavier L.
2.0 out of 5 stars keep a backup system
Reviewed in the United States on May 5, 2015
Verified Purchase
Not as easy a program to navigate thru. Getting it to work with vinyl was a complete headache. Maybe i need to play with it some more. Just upsetting that the settings won't save. I ultimately ended up using my back up system to dj a huge party.
Read more

Abel
1.0 out of 5 stars One Star
Reviewed in the United States on August 10, 2014
Verified Purchase
there no more support for this program
Read more
One person found this helpful
Helpful
Comment Report abuse

Stephen Snow
5.0 out of 5 stars Best purchase for DVS
Reviewed in the United States on January 15, 2014
The first paragraph of this is lengthy and only my history of software, skip it to get straight to my thoughts on Cross.

Alright, we all know Serato and Traktor are amazing, I'm not going to tell you any different. What I am going to say is that I spin at a local nightclub 6 nights a week. I was using my CDJs at first, but had no DVS solution. Since I had the old 1000 mk3s I was asked to start using a laptop. I began using Traktor with a midi controller, but hated the small and restrictive surface, and Traktor kept crashing when re-scanning my folders after downloading a request, plus browsing caused the whole program to stutter (on an i7 at 3.4ghz with an SSD). That being the case, I decided to start looking for a DVS solution that didn't break the bank, and offered more stability.

Cross was it, I didn't expect much, being that it's so cheap compared to the big boys, and it doesn't get a lot of media attention, but holy crap, it's fast, the DVS is responsive (I use it with Vinyl now), full featured (though traktor users will find it slightly lacking in effects), and the included soundcard is LOUD and CLEAR. It may only be 16 bit and usb 1.1, but don't let that fool you, the SL1 box is the same spec. Moving from the interface in my American Audio VMS 4.1 it was night and day, MUCH clearer sound, Much LOUDER sound, and the interface is simple. You also get key analysis from the people who made Rekordbox for pioneer built in, and the ability to change key to match, which definitely makes your mixes come out much smoother (just watch it on vocal tracks).

I originally purchased this used on ebay, and planned to "upgrade" to a serato or traktor interface later, but honestly after using it, I really have no desire to switch... and after seeing how often Mixvibes releases updates, and using the release candidate for version 3.0 with colored waveforms, or pioneer nexus waveforms (which will upgrade your old CDJs to the newer models essentially), I see no reason to switch. Basically, if you're reading this and wondering what a real working DJ in a club environment thinks, BUY IT. You'll be happy you did. The Vinyl response is exactly like the real thing, if you like to scratch it actually user a higher frequency control tone than serato, which means your slow drags and skribbles will sound better, it just never misses a beat. Oh, and all those nasty crashes from Traktor are a thing of the past. Couldn't be happier.

Cons:
Lacking in effects slightly compared to Traktor
No vertical waveform display will annoy some switching from serato (though you do have parallel horizontal display)
Midi mapping less straightforward than Traktor
Having to explain why you're not using serato for your DVS to every dj that enters the booth

After spending 3 months with cross, I no longer have a desire to use any other software. A friend brought his serato box over the other night and I played on it for a while... it's just so basic and weak in comparison. As far as music management, serato is HORRIBLE, that alone is enough to make me dislike it. Other things, like the fact that Serato isn't smart enough to realize your turntable is either wired/hooked up backwards (one of my turntables is wired backwards), or that you can't do a simple search by folder (I use folder names like crates) put me off to serato. I also think the scratch performance is far better... I don't really miss the effects in Traktor that much either, long story short... I'm sticking with Cross. Hopefully this helps those of you looking to purchase this software... just do it, it's worth every penny and you'll be happy you did.

Ronald M. Gilson
5.0 out of 5 stars really good.
Reviewed in the United States on November 19, 2009
just droping by to say that for the price of this mixvibes cross package you can not beat. plus the proformance is really great the time code really does keep up and it is stable. i have played with this for 3 hours stright and not a single hick up or glich. if you are looking for a cheap alternitve to serato this is it. get it while it is in stock. mixvibes cross rocks.
Read more
8 people found this helpful
Helpful
Comment Report abuse

SCRATCH MASTER DEE
1.0 out of 5 stars DOES NOT WORK WELL WITH A SCRATCHING DJ
Reviewed in the United States on January 24, 2015
THIS IS TERRIBLE....I USE THE VINYL RECORDS TO SCRATCH ON MY TURNTABLES AND I CAN'T GET IT TO CALIBRATE MEANING...IT WILL PLAY YOUR MUSIC FROM THE RECORD, BUT SOON YOU GO FOR SCRATCHING, IT LOSES IT POINTS ON THE RECORD. I LOOK UP WHAT COULD BE WRONG, PEOPLE SAID...MAYBE YOUR NEEDLES DIRTY...MAYBE YOUR WIRES CROSS UP...NOPE...PUT NEW NEEDLES IN...STILL DID THE SAME THING...SO NOW UM OUT OF THAT MONEY AND LOOKING FOR SOMETHING ELSE...BUT THIS IS NOT GOOD FOR TURNTABLES CAUSE YOU TOUCH THE RECORD....OFF BEAT IT GOES.....
Read more
Helpful
Comment Report abuse
See all reviews

Trevor Chan
4.0 out of 5 stars Decent entry-level product but bad customer service
Reviewed in the United Kingdom on June 29, 2014
Verified Purchase
Since I bought this product, MixVibes has been tweaked and upgraded several times with new features. I am running MixVibes 3.1.0 but 3.2.0 has just been rolled out, allowing users to mix tracks on SoundCloud.

I use the timecode vinyls and an external mixer and for a long time the software would frequently fail to recognise small/slow record movements. The only way I could fix it was to do a combination of the following: Close/re-open the program; re-install the U46MK2, re-install MixVibes. It was only until recently I discovered that re-calibrating the timecode vinyls solved this issue.

Features-wise, MixVibes has some decent effects although the majority of them will probably remain unused. Locators work fine and the ability to name your cue points is very handy. The user interface is clean with options to customise (to some extent) what windows are visible, allowing you to get rid of the sample bay, locator buttons, etc.

I use it to mix, juggle and scratch and the performance is pretty good considering the relatively low price tag. I use a MIDI controller to adjust effects and trigger cue points and samples. The support for MIDI devices seems fairly extensive.

However, the MixVibes forums could be a lot better! Not much activity and when posting for help, it's rare to see MixVibes staff step and offer assistance (unless it's really easy problems.) For the most part, any assistance you get will likely come from a fellow user. The MixVibes Twitter feed is even worse. You won't get any help there, just 'praise re-tweets' and product marketing. MixVibes deleted its responses to my criticisms when it realised it couldn't help me.

So apart from the lack of help from MixVibes staff, this product is very affordable if you're on a budget and want to make the switch to DVS. Just be weary of the lack of activity in the forums and if you need technical help, you'll have to hope a fellow user a) uses the forums b) knows the solution. MixVibes customer service is pretty poor.
Read more
Report abuse
See all reviews
Pages with related products. See and discover other items: mix dj, dj control, dj package, dj sets, dj tech, audio dj package