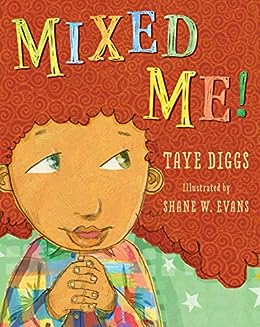 Taye Diggs is an actor whose awards include an NAACP Image Award and a Screen Actors Guild Award. His performance credits include motion pictures (How Stella Got Her Groove Back, Chicago), stage (Rent, Wicked), and television (The Good Wife, Private Practice).

Shane W. Evans is the illustrator of numerous award-winning books for children, including Underground, winner of the Coretta Scott King Illustrator Award; We March,a Kirkus Reviews Best Book of 2012, and Osceola, winner of the Boston Globe-Horn Book Award.

“Mike's unerring sense of self (“I'm a beautiful blend of dark and light”) and the powerful love that surrounds him make this a rewarding, valuable read for families of any makeup.” ―Publisher's Weekly, starred review

“[A] well-written, fun story of acceptance, friendship, and love. The text, colors, and design make this a good choice for read-alouds, but there are many details in the artwork (usually containing the word “mixed” or a synonym thereof) that make it good for one-on-one sharing.” ―School Library Journal, starred review

“Some kids call him “Mixed-up Mike,” but the protagonist makes clear that he isn't mixed-up at all―just mixed . . . Mike's confidence in his own appearance and coolness as well as the way he proudly embodies diversity, including a certain level of androgyny, make this a refreshing read. Evans' integration of rough-textured fabrics into lively and colorful mixed-media illustrations will make readers want to reach out and touch them . . . If all kids had the confidence about who they are that Mike has, what a wonderful world this would be.” ―Kirkus Reviews, starred review

“For the millions of mixed-race Americans who have to endure the constant questioning of their identity, [Mike] has an answer: “I'm a beautiful blend of dark and light, / I was mixed up perfectly, / and I'm JUST RIGHT!” . . . The story's joyful message will resonate with multiracial readers and their families, leaving them with the cheeky takeaway: if you have a problem with me, it's your problem.” ―Booklist

Gr 2–5—A little boy with wildly curly hair navigates the social terrain of being a biracial child. Diggs's short, choppy, rhyming verses convey the busyness of a kid who likes "to go FAST!" All through his day he encounters people staring and asking questions. "See, my dad's a deep brown and my mom's rich cream and honey. Then people see me, and they look at us funny." Diggs very adeptly conveys the feelings a mixed child experiences and also brings a message of acceptance without being didactic. Evans's mixed-media watercolor and pencil illustrations are the perfect accompaniment to this well-written, fun story of acceptance, friendship, and love. The text, colors, and design make this a good choice for read-alouds, but there are many details in the artwork (usually containing the word mixed or a synonym thereof) that make it good for one-on-one sharing. VERDICT A stellar first purchase and a necessary book for all collections.—Jennifer Steib Simmons, Anderson County Library, SC --This text refers to the hardcover edition.
Read more

4.7 out of 5 stars
4.7 out of 5
643 global ratings
How are ratings calculated?
To calculate the overall star rating and percentage breakdown by star, we don’t use a simple average. Instead, our system considers things like how recent a review is and if the reviewer bought the item on Amazon. It also analyzes reviews to verify trustworthiness.

GB
1.0 out of 5 stars Didn’t love it... thought it was too cutesy and missed the mark
Reviewed in the United States on June 16, 2018
Verified Purchase
I’m Caucasian and my husband is African American. We thought this would be a helpful book for my 3.5 year old who is already starting to hear comments and questions about his skin color in preK3!! I was pretty disappointed in the book. It has catchy words and rhymes but it’s just really surface level and hasn’t helped address any of the tougher questions my son Is asking. Still searching for a better book on this topic for toddlers....
Read more
30 people found this helpful
Helpful
Report abuse

Amazon Customer
1.0 out of 5 stars Mixed up
Reviewed in the United States on February 13, 2020
Verified Purchase
I did not like this book, I Love the illustrations they are beautiful. The story does not make since to me. It doesn't cover some of the things that would make this book relatable to everyone. I think it is a personal story between Taye Diggs and his son. Mixed Up reminds me of someone being bullied and called this name, I didn't feel it was the message I was looking for in a book about interracial children. Sorry, I wanted to like it.
Read more
8 people found this helpful
Helpful
Report abuse

SmAshley
5.0 out of 5 stars Marvelous Mixed Me!
Reviewed in the United States on December 13, 2015
Verified Purchase
Great book for mixed kids. We read it nearly every night. Mike looks exactly like my son did when he was 2-3!
Read more

5.0 out of 5 stars Marvelous Mixed Me!
By SmAshley on December 13, 2015
Great book for mixed kids. We read it nearly every night. Mike looks exactly like my son did when he was 2-3!
Images in this review

Justine G
4.0 out of 5 stars An empowered biracial little boy
Reviewed in the United States on June 27, 2020
Verified Purchase
beautiful art work and a simple message for initial conversations about being biracial. I agree I didn’t love the child being referred to as “mixed up”, but I can also understand how in some communities this message could still be delivered. Regardless, the child feels empowered throughout the book and reframed the message of “mixed up” to “mixed me.” My son enjoyed it!
Read more
Helpful
Report abuse

Seth Z
5.0 out of 5 stars Great great GREAT book!
Reviewed in the United States on May 16, 2016
Verified Purchase
This is a wonderful book that all kids will love. It's written very well, reads very well and is full of amazing illustrations that will keep your child involved in the story. It also speaks to the interracial couples that have children allowing confidence to become something that the child can grow with.
Read more
5 people found this helpful
Helpful
Report abuse

RozieBath
5.0 out of 5 stars Son's Favorite Book!
Reviewed in the United States on November 26, 2016
Verified Purchase
My son will point to the book and then to himself when he wants to read it. He's learning his favorite words from this book like "wow" "yeah" "hi" "bye" "don't touch" "dog". Hahaha. He also learned to wave hi and bye with this book. We read it every night.
Read more
2 people found this helpful
Helpful
Report abuse

Sara Gollogly
5.0 out of 5 stars Great book; important message
Reviewed in the United States on July 29, 2020
Verified Purchase
This was purchased as a gift for my best friend’s baby shower. It is a perfect book for any child of mixed race parents. It addresses questions and comments mixed kids may get from their peers in a way that is both age appropriate and full of self confidence. I would recommend this book!
Read more
Helpful
Report abuse
See all reviews

Ace Mum
2.0 out of 5 stars Very disappointed with this book
Reviewed in the United Kingdom on January 14, 2018
Verified Purchase
Very disappointed with this book, it describes the little boy as ‘mixed up mike’ which I thought was insulting. Instead of embracing the beauty of mixed race families and children, it talks about people staring and how he should pick a side?! The book totally misses the celebration and talks about the divide instead. I wanted a book for my sons to see families like theirs and instead I am taking it off the book shelf. It gets 2 stars only for the illustrations
Read more
10 people found this helpful
Report abuse

Dumpling
5.0 out of 5 stars MIXED ME
Reviewed in the United Kingdom on April 6, 2021
Verified Purchase
The little girl, I bought this book for loved it, as she was able to identify herself in it. It was a great purchase.
Read more
Report abuse

Saskia Willems
5.0 out of 5 stars The sweetest book ever!
Reviewed in Germany on December 20, 2020
Verified Purchase
We’re in love with this book. A must-read. My little son's favorite!!
Read more
Report abuse

Derek Pyne
5.0 out of 5 stars A must for mixed children.
Reviewed in Canada on July 27, 2020
Verified Purchase
Easy read. Great illustrations. A must for children with mixed parents.
Read more
Report abuse
See all reviews