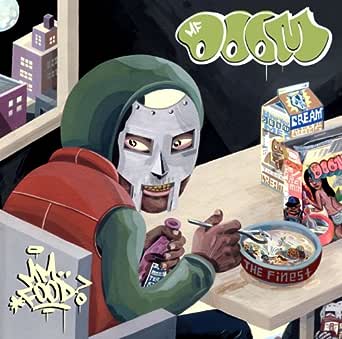 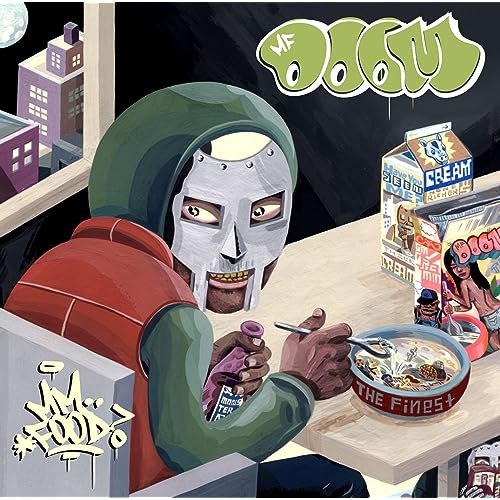 4.8 out of 5 stars
4.8 out of 5
416 global ratings
How are ratings calculated?
To calculate the overall star rating and percentage breakdown by star, we don’t use a simple average. Instead, our system considers things like how recent a review is and if the reviewer bought the item on Amazon. It also analyzes reviews to verify trustworthiness.

CrackedConcrete
5.0 out of 5 stars Early 2000's underground at its finest
Reviewed in the United States on November 14, 2017
Verified Purchase
MM..Food? is not an album for everybody. It is weird, quirky, and very tongue in cheek. Half of the album consists of DOOM rapping over, what I consider to be, some of his tightest beats. His sample game is certainly on point on this album with samples ranging from Stetsasonic on the track Kookies to Sade for the track Kon Karne. At this point in his career he seemed to revel in his tracks being both recognizable for their samples and unique for their layers and his cartoonish lyrics. The other half of the album is quite possibly one of the oddest run of tracks on a hip hop album. They are basically beats in the style of the special herbs series with layer on top of layer of oddball television samples ranging from sesame street to infomercials about edible wrappers. It is both hilarious and clever. As someone who likes to fool around with a sampler in his spare time, I can only imagine how long it took to layer all of those samples, let alone find them. Combining these tracks with the vocal cuts makes for an off the wall album that never takes itself too seriously. To me this album stands alongside Madvillainy and Born Like This as one of DOOM's top works. If you like goofy underground hip hop, super heroes, or slick sample driven instrumentals you should check this album out.

Paula G Cothren
1.0 out of 5 stars Poorly pressed vinyl, someone screwed the song order
Reviewed in the United States on October 9, 2017
Verified Purchase
This vinyl album was pressed out of order. The last song on side A and the first song on side B are reversed. There are long 45 second gaps between songs. Yes, honey, it does make a difference to the album flow. This record must have been pressed by someone with no skill whatsoever.
Read more
8 people found this helpful
Helpful
Report abuse

Buyer
4.0 out of 5 stars AMAZING album-- but missing the "real" version of Kookies
Reviewed in the United States on April 3, 2017
Verified Purchase
As a huge DOOM stan, I had to make this purchase as an essential part of my collection.

The reason why I docked a star is because the fact that the version of Kookies is the crappy, stripped version. I believe the reason this is is because of the sampling on the original (which I think came from both Stetsasonic and also Sesame Street) and either or both objected to its use so it had to get changed on the repressing, which is a huge disappointment. This stripped version is also present on Spotify (although the '2004' version of the song used to be on there) so you'll have to find the correct version somewhere else.

J. P.
3.0 out of 5 stars But the music itself is fantastic. Mouse and the Mask got me back into ...
Reviewed in the United States on August 31, 2017
Verified Purchase
As other have mentioned tracks are out of order on the vinyl. They've also mentioned missing samples but I don't hear it or notice which ones. I'm a big fan of DOOM and was worried it'd be really obvious to me. Cheap paper sleeves, no lyric sheet.

But the music itself is fantastic. Mouse and the Mask got me back into hiphop from a strictly metalhead stance. Great stuff and worth owning if you can't justify spending on the original like me.
Read more
One person found this helpful
Helpful
Report abuse

Brian Seiler
5.0 out of 5 stars An Appropriate Companion
Reviewed in the United States on June 21, 2006
Verified Purchase
I found MF Doom by way of Gorillaz. From there, I moved on to The Mouse and the Mask. Then, I kind of stopped, on account of his schizophrenic cast of monickers. Eventually, I decided to go to the extended efforts required to pick up this record.

I'm glad I did. This CD is, in every way, an appropriate companion to The Mouse and the Mask. Doom's flow is conversational and complex, there are very few hook-verse-hook structures on the record, most of the tracks clock in at around two minutes--it's typical Doom (or typical new Doom, if you're in the same school as some of the other reviewers). I like that. If you like it, you'll like this. Simple decision.

If you're not so familiar with Doom and looking at this as a first record, that's certainly a decent idea in theory. The fact that you can't find it for less than $50 these days (thanks, Stan Lee) is a bit of a deterrent, but if you can get your hands on it, by all means, this is one of the more user-friendly introductions to MF Doom you can find (Madvillain, while impressive in its own way, REALLY comes off as only so much disjointed noise the first couple of times through--this record, on the other hand, at least splits into discernible tracks). From a purely budgetary perspective, though, I'd have to recommend The Mouse and the Mask as a more affordable starter if you haven't hit it already.

If you're already a Doom fan, you probably have this already and I'm not entirely sure why you're reading this. I will say that I don't find much fault with either the production or the skit interlude (which is pretty catchy, in my opinion, and basically just acts like a long instrumental track in the right spot on the album). Dedicated fans need feel no trepidation. Folks who are only familiar with Operation: Doomsday, however, should be aware that this is a very different album. Superior, as far as I'm concerned, but different for sure. The creative production is still there, but the structure on each track is a lot less mundane than what you find on his first album (under this name, anyway). If you're expecting typical verse-chorus-verse, you might be disappointed.
Read more
6 people found this helpful
Helpful
Report abuse

A. Shroyer
2.0 out of 5 stars Broken Case. Very disappointed for $12
Reviewed in the United States on February 14, 2018
Verified Purchase
The case was broken which commonly happens when ordering CDs from Amazon, which I never complain about, however this was a $12 CD and I bought it primarily for the cover art (because I can always stream Mm..Food on Spotify). Very disappointed.
Read more
2 people found this helpful
Helpful
Report abuse

Amazon Customer
4.0 out of 5 stars The wait is over
Reviewed in the United States on October 8, 2008
Verified Purchase
I've been hoping for a re-release of this. I paid $20 for a used copy of Operation Doomsday a few years back and didn't want to spend so much again since I missed this upon its initial release as well. As a whole, it has a different vibe than Doomsday, which makes it hard to declare either as superior to the other. I lean toward Doomsday, but this one's pretty tight. Several superb tracks here, but I must say that the best is Guinesses, on which Doom lets his minions take the MC reins as he whips up a terrific production.
The bonus DVD is cool, but nothing to bite gnomes about. I've only watched it once since purchasing.
Overall, a must for fans of true hip-hop.
Read more
2 people found this helpful
Helpful
Report abuse
See all reviews

Ashley Hammond
5.0 out of 5 stars Interesting, relevant, rap at its most interesting best.
Reviewed in the United Kingdom on January 6, 2019
Verified Purchase
This is a fantastic album, doom just has a way to make his raps so interesting. This album has a structure like no other with seamless sampling flowing into doom’s gravelly delivery. Mad lib has his number influences of the samples and mixes, he and J Dilla, 2 of the best producers for rap ever, so interesting with beat choices but it’s doom’s delivery that really makes this a winner
Read more
One person found this helpful
Report abuse

Stefan Midjich
5.0 out of 5 stars Third best DOOM album of all time
Reviewed in the United Kingdom on April 11, 2013
Verified Purchase
I rate them like this.

It has some killer tracks on it but it also has a lot of weird skits that can be off putting.

My top tracks on this joint are.

HolyVertebae
2.0 out of 5 stars Awful Issue
Reviewed in the United Kingdom on February 23, 2017
Verified Purchase
Great album and when I first looked, great issue. Until I listened to it. I can hear the music playing from the stylus, and it's already missing Potholderz (the pause between it anyway is really long) meaning everything is back a side. Find another issue if you can.
Read more
Report abuse