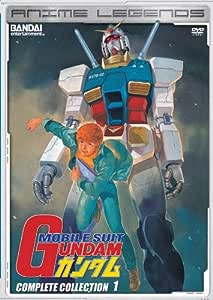 Although it launched a continuity that has lasted more than three decades, Yoshiyuki Tomino's landmark Mobile Suit Gundam (1979) was curtailed due to poor ratings on its initial airing. Tomino's vision of mobile suits--anthropomorphic robots that are part space suit, part one-person spaceship, and part samurai armor--revolutionized the mecha genre. Set in the year 0079 of the Universal Century, these first episodes establish the parameters of the Gundam universe and introduce the principal characters. When the human population topped 11 billion, most of the inhabitants of Earth left the planet for the Space Colonies, 20-mile-long cylindrical space stations in stable orbits. But the corrupt misrule of the oligarchic world government has sparked a rebellion that pits the Principality of Zeon against the Earth Federation. During a Zeon raid on his home satellite, teenager Amuro Ray stumbles into the cockpit of the Federation's top-secret weapon, the Gundam Mobile Suit RX-78. He successfully pilots the giant robot and initiates a rivalry with the unscrupulous but dashing Zeon warrior Char Aznable, a.k.a. the Red Comet. Unlike the dedicated pilots of later mecha adventures, Amuro becomes a hero in spite of himself. He wrestles with his new identity as a soldier and the fact that he is a Newtype, a human with psi abilities that may represent an evolutionary leap. An ill-starred romance further complicates his life. The character designs look very American and very dated, with crumbly Xerox lines. The slow pacing, limited animation, hand-drawn special effects, and rather tame battle scenes are closer in tone to Robotech (1985) than to the more spectacular recent Gundam adventures. The English dub sounds rather stilted, with the narrator ominously asking at the end of each episode, "Who will survive?" But this reissue includes the original Japanese dialogue for the first time--a lack otaku had bemoaned for years. Despite its flaws, Gundam fans will want the program that launched Tomino's vision--and one of the longest-running franchises in animation history. (Rated 13 and older, but suitable for viewers three to four years younger: brief nudity, violence largely restricted to robot vs. robot) --Charles Solomon

4.8 out of 5 stars
4.8 out of 5
405 global ratings
How are ratings calculated?
To calculate the overall star rating and percentage breakdown by star, we don’t use a simple average. Instead, our system considers things like how recent a review is and if the reviewer bought the item on Amazon. It also analyzes reviews to verify trustworthiness.

I'm also giving this 5/5 stars due to the quality of the format, audio, and video quality. Being able to watch this classic in such high-definition is truly worth the price.

The final episodes are something special, because I never saw the last 3 episodes air in the US (possibly due to content or time schedule for the network), and until now it was only the Trilogy that had the last parts.

Considering that older version on DVD is out of print, this was the best choice for me. Yes, this new version also has a DVD format, but it seemed to make more sense in my case to get the best quality available at the time of release. My hope is that other series following will be released in BluRay format such as 08th MS Team, 0080 War in the Pocket, 0083 Stardust Memory, and Zeta Gundam which are all out of DVD print now.

Edit: I added screenshot comparison of the 2015 Bluray cut versus the 2011 DVD cut previously released.

Matthew Daley
5.0 out of 5 stars An Amazing Transfer
Reviewed in the United States on May 19, 2018
Verified Purchase
If you have never watched Gundam, this is absolutely the way to see it. If you have seen Gundam before, you owe it to yourself to catch this. There is an English dub (for you heathens) and the subtitles are decent enough. I can tell (from watching lots of fansubs) that it's not spot on (probably just the English dub script) but for those who watch a lot of Anime it's easy to discern the context. The clarity of sound and crispness of the image are just immaculate. This 40 year old classic has never looked better!

Don't forget to pick up Zeta Gundam after you watch this one! ;-)
Big thanks to RightStuf, Sunrise, and Bandai Namco!
Read more
19 people found this helpful
Helpful
Comment Report abuse

RCD
5.0 out of 5 stars Why is collection 2 of this awesome series not available on Amazon?
Reviewed in the United States on July 20, 2018
Verified Purchase
Always wanted this original series for my collection of gundam series I already own. Shame I have to mix the dvd sets with the new Blu-ray sets. Really can’t afford to rebuy everything on Blu-ray. Years ago I was only able to get the three movie set English dubbed. Back then I knew I was missing a lot , so I looked for the series and couldn’t find it. However once I did it was always way too expensive. When anime started to drop in prices I was able to get much of the other series’ that were available. But now anime prices are jumping back up to crazy amounts again and forcing people to greatly slim down their choices and purchases. Even forcing people to forgo owning what they like and planting themselves on online sites to watch them. (As long as the site keeps the series the people want to watch whenever). So I’m closing, I love that I can finally get a copy of the series to own but,.......where is the second half of the collection? It seems to be nowhere in Amazon. And of course I talking bout the Blu-ray English dubbed version like this first collection.
Read more

P.Ching
5.0 out of 5 stars Nice, clean transfer to Blu-ray
Reviewed in the United States on June 18, 2018
Verified Purchase
Nice, clean transfer to Blu-ray. Especially for anime from 1979. I'm very happy to have the opportunity to finally collect this legendary anime domestically. As a side note, I highly recommend watching Mobile suit Gundam The Origin before any of the other Gundam UC anime. It add so much more to watching Mobile Suit Gundam 0079.
Read more
8 people found this helpful
Helpful
Comment Report abuse

BlueStarTop Contributor: Manga
5.0 out of 5 stars Huge improvement from the DVDs!
Reviewed in the United States on May 15, 2016
Verified Purchase
After Gundam DVDs all went out of print from Bandai, fans figured getting the DVDs meant paying outrageous prices or getting bootleg releases. It also meant that future releases were going to be nonexistent. Luckily, RightStuf is releasing many Gundam series starting with this classic! This is the second part to the Gundam series and covers from the ending to the Odessa Operation to the end of the series. While the first Collection seemed a little dated, these later episodes look a lot better and the story greatly improves.

Once again, it's a two-disc set and its in Bluray for the first time in America!
Read more

Evan
5.0 out of 5 stars Brilliant For Its Time
Reviewed in the United States on April 12, 2016
Verified Purchase
Getting to watch this again after so long has been fantastic. I grew up watching several different Gundam series on Toonami as a kid, as well as playing many of the games for Playstation 2. If you haven't seen the original Gundam, you need to see where it all started and truly appreciate the tone, themes and writing they put out for this masterpiece. It truly is timeless, which is hard to say for an animated series, but well deserved nonetheless.
Read more
10 people found this helpful
Helpful
Comment Report abuse

Matthew Henderson
1.0 out of 5 stars Key episode unplayable across multiple disks.
Reviewed in the United States on October 15, 2020
Verified Purchase
I was genuinely excited to get these disks, as I was introducing my girlfriend to the series. At first, everything was great, the colors and ink lines look amazing. However, when it came time to watch episode 6, it would not read at all. Given how story-driven the series is, combined with the cost, this is unacceptable. After submitting for a replacement, I found that the second disk was doing something similar- episode 6 played, albeit very reluctantly. I was prepared to accept this until another, later episode was showing issues reading. This is incredibly irritating since this is only 2 disks out of 4- and the price of the second set has jumped to nearly $70? That is madness for something of such quality (I didn't even mention the first shipment of disks had some kind of dried residue all over them).

The plastic wrap on the case was questionable as well, not very official and lacking some of the security stickers along the top, which new cases come typically with. I'm not sure, but given the repeated failure at curtain parts of the disk, and the lower quality in the packaging, this feels like a used copy, or maybe even a bootleg.

tyler2441
5.0 out of 5 stars Still the cream of the crop in Gundam
Reviewed in the United States on August 6, 2019
Verified Purchase
I'll be frank, the animation is rather dated. However, the actual story is excellent that even nearly 40 years later I would unhesitatingly recommend this series. This was not my first Gundam and I had only watched parts of a few episodes on its short lived run on Cartoon Network. However even after having completed about six complete viewings of different Gundam series, this is the one I have enjoyed the most. I honestly would say to purchase part 1 and 2 because part 1 ends at a weird point, but if you still aren't sold then just start with this.
Read more
Helpful
Comment Report abuse
See all reviews

Estelle
5.0 out of 5 stars Perfect
Reviewed in the United Kingdom on December 1, 2015
Verified Purchase
Finally we have Mobile Suit Gundam available offiically as a physical release in the UK. They did not go crazy with extras, but you get the first 21 episodes remastered in HD, playing in 4:3 with your choice of Japanese or English. From what I have watched the picture and sound quality is perfect. The discs come in a standard Blu Ray box that has a reversible cover, and it also includes a larger outer box with some beautfiul artwork and space to create a box set once part two releases. This is a must own for Gundam and anime fans, and I look forward to more Gundam on Blu Ray in the future.
Read more
13 people found this helpful
Report abuse

craig
5.0 out of 5 stars A gift that keeps on giving
Reviewed in the United Kingdom on October 14, 2019
Verified Purchase
It was a gift for my grandson who loves it.
Read more
Report abuse