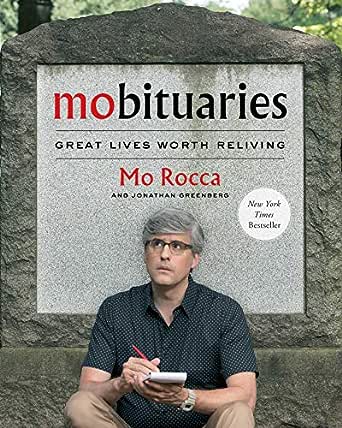 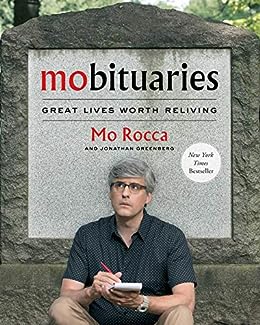 Mo Rocca is a correspondent for CBS Sunday Morning, host of The Henry Ford’s Innovation Nation, and host and creator of the Cooking Channel’s My Grandmother’s Ravioli, in which he learned to cook from grandmothers and grandfathers across the country. He’s also a frequent panelist on NPR’s hit weekly quiz show Wait Wait…Don’t Tell Me! Rocca spent four seasons as a correspondent on Comedy Central’s The Daily Show with Jon Stewart. He began his career in TV as a writer and producer for the Emmy and Peabody Award–winning PBS children’s series Wishbone. As an actor, Mo starred on Broadway in The 25th Annual Putnam County Spelling Bee. Rocca is the author of All the Presidents’ Pets, a historical novel about White House pets and their role in presidential decision-making.

4.6 out of 5 stars
4.6 out of 5
901 customer ratings
How does Amazon calculate star ratings?
Amazon calculates a product’s star ratings based on a machine learned model instead of a raw data average. The model takes into account factors including the age of a rating, whether the ratings are from verified purchasers, and factors that establish reviewer trustworthiness.

Pauline Chan
5.0 out of 5 stars Great Book ! Good reading !
Reviewed in the United States on November 10, 2019
Verified Purchase
I love the Mobituaries podcasts and purchased the book. It’s a really good book, it’s fun to read. I have always enjoyed Mo Rocca’s dry humor on CBS Sunday Morning and the cooking channel show My Grademonther’s Ravioli. I love this book, he is not only talking about death people and he’s also had stories about death of the fantastic dragons, death of a sports team, death of tree and more…
Read more
30 people found this helpful
Helpful
Comment Report abuse

SKE
5.0 out of 5 stars Remarkable
Reviewed in the United States on November 17, 2019
Verified Purchase
Writing something both informative and entertaining is challenging to say the least. Rocca excels. A book that can be consumed in bites readily, the reader encounters interesting and enriching obscure bits of history. Even many of the asides are endearing. I repeatedly mentally exclaimed, "Wait, tell us more about that!" The uncanny links between scenarios from disciplines or centuries far removed from one another were fun discoveries. Enjoy.
Read more
26 people found this helpful
Helpful
Comment Report abuse

The Movie Man
VINE VOICE
5.0 out of 5 stars Interesting and highly entertaining.
Reviewed in the United States on November 27, 2019
Verified Purchase
This is a terrific book with lots of interesting facts. Rocca has put together a collection of intriguing details about the "deaths," not only of individuals who may not have been given a proper sendoff originally, but of reputations, fads, movements, and even countries. A great gift idea for those who enjoy unusual and little-known facts.
Read more
17 people found this helpful
Helpful
Comment Report abuse

M. J. Riordan
2.0 out of 5 stars Started Well Lost Interest
Reviewed in the United States on December 21, 2019
Verified Purchase
Perhaps it’s just me, but after starting pretty well, the author lost me for a variety of reasons. The book turned into a slog. I know it’s his book but as it continues it becomes more about him and his views than those he is writing about. I stayed through to the end so I could honestly review. But parts of me wish I had just given up and moved on.
Read more
11 people found this helpful
Helpful
Comment Report abuse

Jacqueline
5.0 out of 5 stars Funny and heartfelt
Reviewed in the United States on November 26, 2019
Verified Purchase
I love Mo and everything he does. This book takes the podcast and both adds information and stories. It's a wonderful read.
Read more
9 people found this helpful
Helpful
Comment Report abuse

Lynn
5.0 out of 5 stars Give it as a gift to a hard to buy for person!
Reviewed in the United States on November 22, 2019
Verified Purchase
I got this as an audiobook, loved it and bought the hardcover version as a gift for someone for Christmas. the obts are funny, interesting and informative....gret travel book.
Read more
8 people found this helpful
Helpful
Comment Report abuse

Krazee Dog Lady
2.0 out of 5 stars Where are the photos???
Reviewed in the United States on December 25, 2019
Verified Purchase
Would like to give this more stars, but there aren't any photos! Who writes about people and personalities, but doesn't include any pictures? When reading about the lives of real people, the reader usually wants to know what they look like. Particularly since the subjects are deceased, that usually inspires even more than average curiosity. Very odd, not to mention disappointing.
Read more
5 people found this helpful
Helpful
Comment Report abuse
See all reviews from the United States

Dave Ball
3.0 out of 5 stars Don’t expect startling revelations!
Reviewed in Canada on May 18, 2020
Verified Purchase
Half way through which is about right to score this book at 50-50...very so-so..not much new or inspiring. Nicely package. But do you really care about non-existent topics like dragons?
And I note a glaring error in the section on the show Bewitched. It states Dick York replaced Dick Sargeant..uh-uh..it was the opposite !

Amazon Customer
5.0 out of 5 stars Interesting
Reviewed in Canada on January 27, 2020
Verified Purchase
It was a very interesting read
Read more
Helpful
Sending feedback...
Thank you for your feedback.
Sorry, we failed to record your vote. Please try again
Report abuse