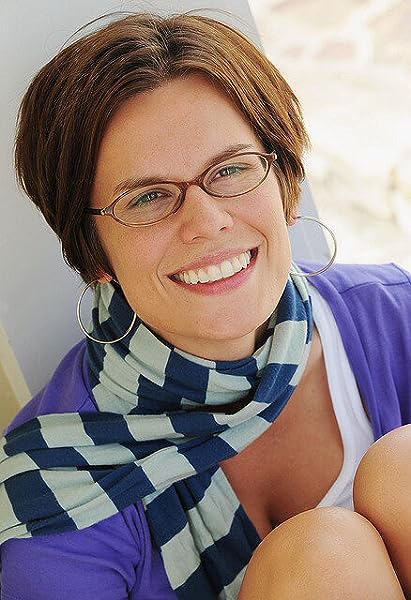 by Amy Anderson (Author)
4.3 out of 5 stars 148 ratings
See all formats and editions
Sorry, there was a problem loading this page. Try again.
Since 1967, crafters have entrusted their most treasured creations to Mod Podge--the number one, all-in-one glue, sealer, and finish product that's water-based for easy cleanup and totally non-toxic. The popularity of Mod Podge continues to grow, as does its product lineup that now includes Sparkle, Outdoor, Dimensional Magic, and Fabric formulas. Mod Podge Rocks! features over 40 simple, inexpensive decoupage projects that showcase the versatility of this celebrated product.  Contemporary, fun, and welcoming--just like author Amy Anderson's popular Mod Podge Rocks! website-the book includes everything from home accessories and holiday décor to wearables and jewelry.  Joining Amy herself as guest project designers are some of the hottest names in crafting, such as Cathie Filian and Candie Cooper. A basic section outlines the simple techniques, and each project features beauty shots, easy-to-follow instructions, and how-to photos.
Read more
Previous page
Next page

“Mod Podge hasn't changed much in 45 years, but crafting tastes have. Anderson (modpodgerocksblog.com) has assembled a variety of home decor, accessory, and holiday projects that bring this iconic sealer from the macramé-planter era to the modern age. Standouts include a necklace made with candy wrappers and a stylish clock using washi tape and scrapbook paper. VERDICT Younger crafters will enjoy Anderson's fresh approach, and those who remember the 1970s will be pleased to see the return of an old favorite.” --Library Journal
“The designing diva behind the absurdly popular Mod Podge Rocks blog, Ms. Amy Anderson, has gathered some of her craftiest friends together to share a plethora of pleasing podgeable projects that are to die for fabulous!. . . Whether you've never dipped your toes into the decoupage pool or you dove right in ages ago, there is something for everyone here. A feast for the eyes and the imagination, Mod Podge Rocks! is a must have for any craftinista.” --Margot Potter, craft author and expert “If you like creating, you'll love this book...This is an easy to navigate craft book, with tons of photos and simple directions. You'll find a nice mix of techniques that might be familiar and new methods you might not have considered.” -GAL Time

Amy Anderson was born in Seattle, WA to a creative mom and an engineer dad. She has been crafting and writing since she was little, so blogging about crafts was a natural fit. Amy has been writing Mod Podge Rocks since 2008, and since that time she has started several more blogs and become a contributing writer on Babble.com, Coupons.com, eBay, and more. Her blog was named one of Babble.com's Top 50 Crafting Blogs of the year for 2011 and 2012. She also won the Bloggie in 2014 for Best Art, Craft or Design blog. Amy currently resides in Vancouver, WA with her pug, Otto.

Amazon Customer
5.0 out of 5 stars I love Mod Podge!
Reviewed in the United States on December 24, 2015
I love Mod Podge and this book does rock! Lots of tips and ideas! A great addition to my craft library!
Images in this review

M.U.T.Lee Bayer
4.0 out of 5 stars interesting read with some nifty ideas for your crafts
Reviewed in the United States 🇺🇸 on December 8, 2013
Verified Purchase
I have long been a fan of mod podge going back to the 1970s when it was real popular, this is a nice book with some cool ideas and a few things I had never really considered, but probably not a lot of real earth shattering ideas but it is a fun read. and I liked the history of mod podge and learning about all the different types of mod podge I never knew about. This can be an eyeopener for those really into the whole crafting scene.
Read more
4 people found this helpful
Helpful
Report abuse

H.
3.0 out of 5 stars fun for technique and project diversity, but not for sophisticated projects
Reviewed in the United States 🇺🇸 on December 20, 2015
Verified Purchase
This is a fun book on decoupaging a lot of projects, but don't expect any project that doesn't look like it's cheap or just for kids. And while some of the projects are cute or fun or even pretty for kids, some of the projects are quite hideous. Good to learn the technique, but not for sophisticated project ideas. (I've also reviewed Durwin Rice's decoupage book on Amazon, and as I mentioned there, his book is great for technique and breadth of projects and does cover more sophisticated projects, but his visual style is very dated.)
Read more
One person found this helpful
Helpful
Report abuse

Karrie M.
3.0 out of 5 stars if you are a complete beginner with mod podge this may be for you!!!
Reviewed in the United States 🇺🇸 on November 4, 2020
Verified Purchase
Expected some more original ideas! all very easy projects and feel letdown by the disappointing content...
Read more
Helpful
Report abuse

Nina K
3.0 out of 5 stars Not Enough Info
Reviewed in the United States 🇺🇸 on May 23, 2013
Verified Purchase
I bought this book not only because I wanted to learn the uses for Mod Podge but also because I wanted to learn the history of the product. While the history is provided, to call it a "brief history" is overly generous. The book is mostly about the author's projects and how you can accomplish them with the various kinds of Mod Podge. I wanted to know the ingredients, why it's better than watered down white glue, and what its limitations are. I didn't learn that. I just got a book full of decoupage projects that I will never do in my house. Swell.
Read more
Helpful
Report abuse

Brandy Love
3.0 out of 5 stars cute ideas, but wouldn't of liked more
Reviewed in the United States 🇺🇸 on December 11, 2012
Verified Purchase
I honestly would probably only do a few of the crafts in this book. Some of them seem a bit too left field or impractical, if that makes sense due to it being a craft book. Thankfully I got to pay the amazon prime price for this book or else I would of been disappointed. There are a few cute ideas in here that made me feel like I didn't waste my money. To be fair I should disclose I've only done one craft from the book so far. The bottle caps and I am turning them into magnets instead of a necklace.
Read more
5 people found this helpful
Helpful
Report abuse

Diane M. Hahn
5.0 out of 5 stars It stay soft for a good length of time
Reviewed in the United States 🇺🇸 on May 26, 2021
Verified Purchase
Works wonders for small projects
Read more
Helpful
Report abuse

Andrea Currie
5.0 out of 5 stars Fantastic book for seasoned Podgers and new Podgers alike!
Reviewed in the United States 🇺🇸 on March 21, 2013
Verified Purchase
Mod Podge Rocks is bursting with happy creativity that you can easily recreate yourself or tweak to your liking. What I love most about this book is the section about how each formula works and how to prep different surfaces for Mod Podge application. I'm a seasoned crafter and I see Mod Podge Rocks as not only a great source of inspiration but also invaluable resource to refer back to. If you have Mod Podge or an interest in using one of the worlds most versatile adhesive/sealer then you also need the Mod Podge Rocks book!
Read more
3 people found this helpful
Helpful
Report abuse

JSMom
5.0 out of 5 stars Great Buy - Inspiration
Reviewed in the United States 🇺🇸 on March 22, 2013
Verified Purchase
This is a very informative book about the many uses for Modge Podge. I have already used this product in many ways and even though I may not be doing projects shown in the book, it provides much encouragement for other ways I can use it in my own artistic explorations. I would say for the price this book is a must have for someone who never knows what they might try with fabrics, paper, canvas, fibers, etc.
Read more
3 people found this helpful
Helpful
Report abuse
See all reviews

jane c day
5.0 out of 5 stars Mod Podge Rocks
Reviewed in the United Kingdom 🇬🇧 on February 6, 2014
Verified Purchase
being a great fan of Mod Podge and the author of this book, Amy Anderson I have wanted this book for a while now and I am so glad that I decided to buy it. So many tips and project ideas fully explained.
Read more
3 people found this helpful
Report abuse

tasmania
2.0 out of 5 stars Not for me
Reviewed in the United Kingdom 🇬🇧 on February 17, 2013
Verified Purchase
I really wanted to like this book and its projects. But I found the projects were probably more suited to young teens. I would just say take a careful look inside before ordering as sending it back was not so easy.
Read more
Report abuse

p
1.0 out of 5 stars Not worth it
Reviewed in the United Kingdom 🇬🇧 on May 30, 2013
Verified Purchase
Can't say I was inspired by this book, nothing new to learn perhaps better for the less experienced. Save your money and look up free tutorials online.
Read more
One person found this helpful
Report abuse

klj
4.0 out of 5 stars inspiring!
Reviewed in the United Kingdom 🇬🇧 on September 24, 2012
Verified Purchase
I am a regular visitor to the website which is behind this book, and was pleased to see that there is yet more inspiration in the book. there are lots of projects which are easy to follow, and a good explanation of the materials and techniques behind successful mod podging. would recommend!
Read more
3 people found this helpful
Report abuse

Mrs. Pauline Carr
5.0 out of 5 stars Stick almost anything
Reviewed in the United Kingdom 🇬🇧 on January 30, 2013
Verified Purchase
A great product a bit pricey .........
Does what it says and more. Ideal for crafts and where a bit of sticky is needed.