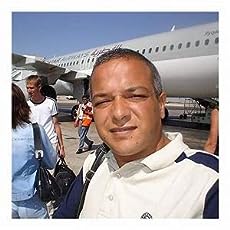 For more than two decades, Mohamed Bacha has carried out academic research in Tunisian Arabic grammar and morphology, but also in its stylistics and cultural heritage by studying and adapting to other languages the Tunisian oral literature and tradition.

M Bacha published the first textbook of Tunisian Arabic in 2013: ''Tunisian Arabic in 24 Lessons'', which immediately sold thousands of copies. Followed the second best-seller ''Tunisian Arabic in 30 Lessons'', and subsequently ''Decoding Tunisian Arabic'' and the renowned supplementary resources ''Tunisian Arabic - English Dictionary'' and the practical handbook ''Survival Tunisian Arabic'', the delightful collection of folktales and short stories
''15 children's stories in Tunisian Arabic'', "Eternal Classic Songs of Tunisia", "The Revolutionary Chants of Club Africain Ultras", "Tunisian Folklore: Folktales, Songs, Proverbs", and more...
Readers and users of M. Bacha's books have been Arabic language learners, linguists, students and researchers in: comparative grammar, sociology, anthropology, translation, literature, etc. Journalists, travelers to Tunisia & the Arab world, expats and foreign language learners worldwide.
Mohamed Bacha created modern learning/teaching curriculae and materials (textbooks) necessary for a language course, that have been put into practice not only by himself to teach his own international students but in other academic settings worldwide. His textbooks are also widely used in self-study contexts, with very satisfying results.

Although Tunisian Arabic has been the subject of extensive academic research for long years, by academic researchers, the results and findings had remained mainly theoretical and restricted to closed academic circles. Mohamed Bacha's revolutionary innovation was to provide modern teaching and learning materials, textbooks and other resources of Tunisian Arabic available for use by the general public worldwide, with evidence that these materials and curriculum have been received with great enthusiasm and proved to be efficient as language learning.teaching tools, equal to acknowledged good EFL/TEFL resources.

M. Bacha holds an MA and a PHd in Comparative, Government and Binding Syntax: a theoretical approach to Grammar study that adopts Universal Grammar: an innate human linguistic knowledge that has to be exploited in foreign language instruction, in order to make it almost as easy as acquiring a native mother language.
In his research in language, Mohamed Bacha aims at finding and underlying the syntactic similarities and differences of English and Tunisian Arabic.
He has undertaken extensive research in Comparing the two languages.

In order to have a deeper idea of the Universal Grammar Syntactic approach, adopted by the author in his Language Learning books, please read the introduction to his latest book "Decoding Tunisian Arabic":

His fiction books portray the Tunisian culture and language in an elegant and attractive English.
He adapted to English fascinating Tunisian folktales, unknown to the world until now, although made popular in Tunisia by the famous and legendary storyteller Abdelaziz El aroui, on Tunisia radio and TV, durins the 60s and 70s.
His folktales are then selected from the rich Tunisian oral literature, as in Sabra and Sultan: the story of a newly divorced woman who fled the village gossip to live with a lion in the jungle. Idealistic, she tried to 'convert' the lion 'Sultan' into humanity. But by doing so she brought back the usual complex human traits to the forets which proved to be fatal. The Couscous Genie, Four Fantastic Tales from Tunisia.
He also Collected and translated Tunisian proverbs: Our Days are like wind in the mill, The beating of the beloved is like eating raisins: 300 Tunisian proverbs.
His latest publications: ''Tunisian Arabic in 24 Lessons'' (and "Decoding Tunisian Arabic"): A book that was ranked N 1 bestseller on Amazon Kindle in Foreign Languages category/Arabic, and quite interestingly/unexpectedly, in travel guides for Tunisia category! an original approach to language based on the theoretical assumption that all human languagess are basically the same, very resembling on the level of core grammar. They differentiate only on peripheral/surface matters that could easily be overcome by learners!
Read more 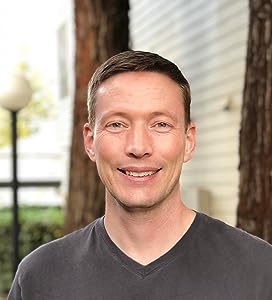 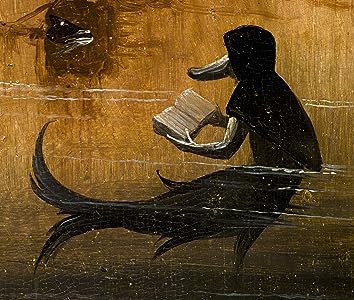 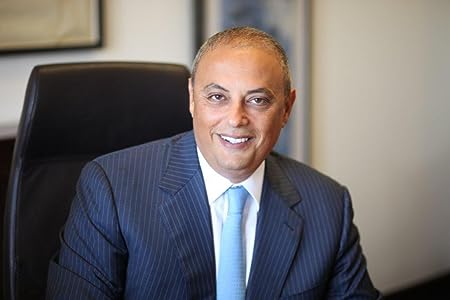 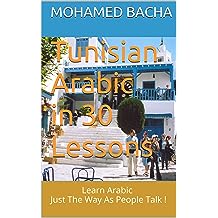 has been received considerable amount of enthusiasm and demand from customers who said they finally found a reference book to learn Colloquial Arabic as spoken in Tunisia: Arabic just the way as people talk in real life, in contrast with Standard Arabic,which is not a speech form and never naturally spoken by native speakers of Arabic.


"Tunisian Arabic in 30 Lessons" is an enjoyable, easy-to-read self-instruction textbook for speakers of English who want to learn Tunisian Arabic, the colloquial form of Arabic spoken in Tunisia
Readers are:
- Visitors to Tunisia and other Arab speaking countries,
- US / UK and other nationalities who are living in Tunisia as for professional or personal reasons
- People who want to acquire and improve their communication skills in Arabic worldwide for professional motives
- Language Students and linguists use this textbook for their study and research, as it contains authentic linguistic data, original syntactic insights into Tunisian Arabic and interesting comparisons between Tunisian Arabic and English based on the Universal Grammar syntactic theory.
- Lovers of foreign languages worldwide.

Other titles by the same author: 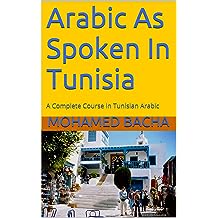 Arabic As Spoken In Tunisia: A Complete Course in Tunisian Arabic (Explore Tunisian Culture Through Its Language) Jan 19, 2014
by Mohamed Bacha
( 2 )
$9.99
A new edition of the popular Language Learning books «Tunisian Arabic in 24 Lessons» and «Tunisian Arabic in 30 Lessons». This edition contains more pratice activities and additional lessons. Besides the conventional lessons, two sections of paricular originality are added: - a popular Tunisian song: 'Jaari ya Hammuuda' (O my neighbour Hammuuda', whith lyrics transliterated and translated in English. This lessons will help readers learn to...sing in Tunisian Arabic!
- A well-known Tunisian folktale, told on radio in the 70's by the mythical storyteller Abelaziz El Aroui. The mythical folktale 'il-jurH yabra ya Jabra' (The wound can be healed, O Jabra' is also transliterated and translated into English.
This book aims to help visitors to Tunisia explore and enjoy Tunisian culture in an auhenic. It is would also be interesting to readers who wish to communicate in Tunsi with Tunisians worldwide, but also with speakers of other related dialects of Modern Sandard Arabic, such as Egypian, Libyan and Moroccan.
With all the collected data of natural Tunisian language, this book is evidently a ressource to linguists and researchers in Applied Linguistics and Comparative Grammar.
The last two chapters constitute a real innovation in comparison to previous editions: a polular typical Tunisian song [jaari ya hammuuda], that went 'viral' in the 70s and 80s throughout the Arab world, and a famous Tunisian folktale: il-jurh yabra ya Jabra (the wound can be healed, O Jabra) also told in the 70's by the legendary Tunisian storyteller Abdelaziz El Aroui. The audio content of both song and folktale are available to listen to on the website and facebook page dedicated to the book:
http://tunisianarabic24.blogspot.com/
https://www.facebook.com/tunisianarabic1
Finally, this is an enjoyable and instructive book to readers who love foreign languages and are always keen to learn new foreign languages! 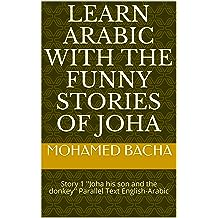 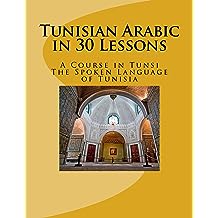 The Handbook of Tunisian Arabic: A Resource for Travelers and Students (Explore Tunisian Culture Through its Language) Dec 28, 2013
by Mohamed Bacha
$6.99
This is an enjoyable, easy to read and practical handbook to learn Tunisian Arabic, the spoken language in Tunisia, North Africa.
This book is intended to help visitors to Tunisia explore and enjoy Tunisian culture in an authentic way, by familiarizing with one facet of its identity: its spoken laanguage!
It is also helpful to those who would like to communicate in Tunsian Arabic with Tunisians worldwide, but also with speakers of related and similar Arabic dialects like those spoken Egypt, Libya, Morocco, Qatar, UAE.
Finally, this is a funny and instructive book for readers who love discovering foreign languages…and who are always keen to learn new foreign languages!
After reading this book, say within four hours, and with some practice (possibly with native speakers of Arabic) you will be able to speak and communicate really and genuinely in Tunisian Arabic!
A related website and a faebook page dedicated to this book:
http://tunisianarabic24.blogspot.com/
https://www.facebook.com/tunisianarabic1
Here there will be constant updates, events and news, such as book signing ceremonies in Tunisia and a forum for reader's comments, feedback and discussions, 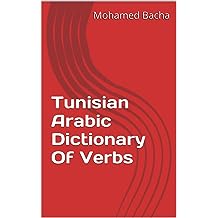 Tunisian Arabic Dictionary of Verbs is a useful learning resource to any student of the Tunisian colloquial language. It aims to improve students' understanding and usage of Tunisian verbs in various phrase structures.
A valuable tool for both language students and travelers who want to start learning Tunisian Arabic, or those who have a more advanced level and are already using the two previously published self-instruction manuals: "Tunisian Arabic in 24 Lessons", "Tunisian Arabic in 30 Lessons".
Learners who have already acquired the previous grammar books will find this new publication a helpful supplementary resource for their study of Tunisian Arabic.
Read more
Other Formats: Kindle , Paperback 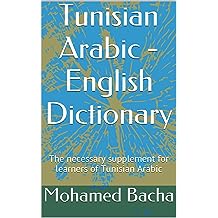 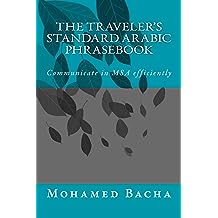 The Traveler's Standard Arabic Phrasebook Feb 15, 2016
by Mohamed Bacha
$7.99
This phrasebook and thematic dictionary has two sections: The first is a collection of the most common and useful phrases and expressions in Modern Standard Arabic (MSA), the lingua franca of the Arabic-speaking world. The examplary phrases and expressions are useful to travellers and/or readers who need to communicate with arab-speaking interlocutors.
Read more
Other Formats: Paperback 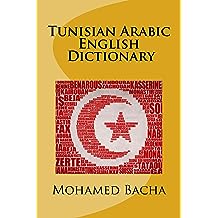 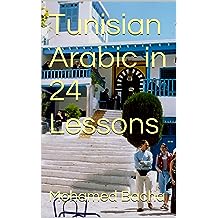 Tunisian Arabic in 24 Lessons (Explore Tunisian Culture Through its Language) Dec 28, 2013
by Mohamed Bacha
( 9 )
$7.99
Tunisian Arabic in 24 Lessons is an enjoyable, easy-to-read self-instruction book destined to native speakers of English who want to learn Tunisian Arabic, the dialect of Arabic spoken in Tunisia:
For those who will travel to this beautiful country or need to communicate with Tunisians worldwide.
A valuable resource to language students and linguists for their study and research in Arabic as it contains authentic linguistic data syntactic insights into Tunisian Arabic.
Read more
Other Formats: Paperback 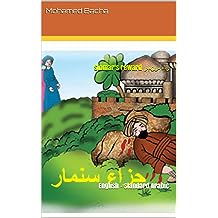 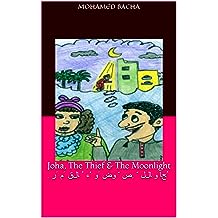 Joha, The Thief & The Moonlight is the third of a series: Learn Arabic with The Funny Stories of Joha
English - Arabic, aimed to study Standard Arabic with the funny and delightful stories of Joha, the beloved folh hero of the East. The first two volumes were: 1. Joha, his son and the donkey, 2. Joha and the Expensive goat.
a very funny and enjoyable story of Joha, the beloved folk hero of the East. It is presented in parallel text, that is a line or paragraph in English followed by its counterpart in Standard Arabic.
This series is ideal for both learners of Standard Arabic and English! The first volume of the series is: ''Joha, his son and the donkey.'', the second is: Joha and the expensive goat.
The entire story is presented again at the end of this volume in English and Arabic. 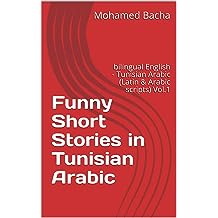