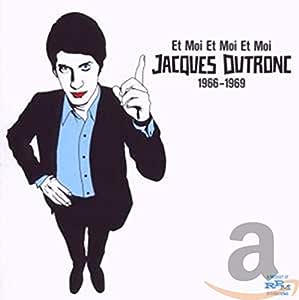 2009 release, a collection from the French singer, composer and actor. Dutronc had it all. He was Françoise Hardy's beau, impeccably dressed and equally handsome. Above all, he was a consummate musician, able to turn his hand to whatever style took his fancy. Although the non-French interest in Dutronc stems from his superficially Garage Rock leanings, his mix of sarcastic lyrics with the boulevardier tradition and '60s rock offers so much more. In the early '70s, he moved into film and has remained a popular, cigar chomping, slightly mischievous figure. RPM.

Matthew Burns
4.0 out of 5 stars J'ai Mis un Tigre Dans Ma Guitare
Reviewed in the United States on November 21, 2011
Verified Purchase
I had Le Responsable on a Blow -Up Compilation and was curious to find out more about Jaques Dutronc's music. Having been watching him on Youtube I felt confident about buying this CD. I would say nearly half of the tracks are Amazing, a quarter are good and the rest ok.
If you are a 60'ies fan then it doesnt realy get groovier than this, where it is, it totaly is groovey. there are a couple of tracks I cant get into really, he is at his best when he does n't try to be Bob Dylan or Jim Morrison in my opinion, but gets 4 stars due to the Super Good Vibe of the rest. I love it, been listening regularly since I got it. I am going to try and get the lyrics and sing along dans ma voitue.

Edward Brydalski
4.0 out of 5 stars ME ME ME LIKE
Reviewed in the United States on October 29, 2010
Verified Purchase
This guy is great and these songs are amazingly good. What a great backup band.

Get this and dig in!!
Read more
One person found this helpful
Helpful
Comment Report abuse
See all reviews

Ms. A. Crane
5.0 out of 5 stars Fantastique!
Reviewed in the United Kingdom on August 29, 2012
Verified Purchase
I recently bought this CD from Amazon after seeing a clip of Jacques Dutronc on YouTube. I had an idea what to expect, but this CD not only met, but greatly surpassed all my expectations of it. Occasionally, one buys a CD that just totally blows you away, not only by being better than you thought it would be, but by also being just so incredible. This is one such release.
As is the way with most non-English-speaking artists, most of us have never heard of Jacques Dutronc, but don't let that put you off! If you like hip, club-style sound from the 60s, then you will love this, whether you speak French or not. Anyone who's ever been to any 60s nightclubs will already know quite a few of the songs on here; hearing "On Nous Cache Tous, On Nous Dit Rien" and "Le Responsable" again after so many years was very nostalgic for me, and further enhanced my opinion of it.
Around half of the songs on here (presented in chronological order) are definitely in the garage vein, although without the usual "my girl's no good"-style lyrics. If you do understand French, you would realise just how wierd some of these lyrics actually are (eg "There are cactuses all over the world, it's impossible to sit down"!), but this is not essential to appreciating the great tunes, which to me sound like what might have happened if The troggs met Bob Dylan.
The other half of the tracks are a mixture of various styles, from the tongue-in-cheek music-hall Kinks-ish of "Les Playboys", the out-and-out psychedelia of "La Metamorphoses" to the protest-style "Les Rois De Reform". Whatever mode he was in at the time, Jacques delivers top-quality stuff throughout this CD; there is not a bad tune amongst them.
I am now very interested to find out more about this obviously extremely talented guy. I would thoroughly recommend this CD to anyone interested in top-quality 60s sounds. On ne sera pas decu!
Read more
One person found this helpful
Report abuse

Kooter
5.0 out of 5 stars French icon!
Reviewed in the United Kingdom on July 6, 2013
Verified Purchase
Includes the tracks- L'Idole, Et Moi, et moi, et moi. If you like The Kinks, then check this guy out. I have know idea what he's saying, but the tunes are awesome.
Read more
2 people found this helpful
Report abuse