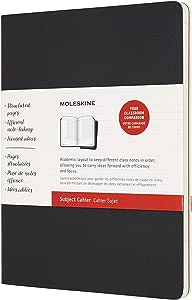 Visit the Moleskine Store
4.7 out of 5 stars 244 ratings
| 4 answered questions
Available at a lower price from other sellers that may not offer free Prime shipping.

Cahier Journals are flexible paper companions for everyday notes and ideas. Available in handy packs of 3, they allow you to catalog and develop different projects, tasks and plans.

The Subject Journal is a lightweight, flexible classroom companion with a structured academic page layout that helps you get the most from every lesson. Each page is divided into 5 sections with space to record a title and date at the top, above a main section for lecture notes. A vertical side panel is designed for keywords, diagrams and highlights, while a horizontal summary box at the bottom makes space for conclusions, takeaways and next steps.

The Subject Journal keeps your ideas focused and elevates your school note-taking to the next level. Sold in packs of 2, each Subject Journal includes stickers to customize the cover of each with your name, subject and the year.

The Subject Journal is a lightweight, flexible classroom companion with a structured academic page layout that helps you get the most from every lesson. Each page is divided into 5 sections with space to record a title and date at the top, above a main section for lecture notes. A vertical side panel is designed for keywords, diagrams and highlights, while a horizontal summary box at the bottom makes space for conclusions, takeaways and next steps.

The Subject Journal keeps your ideas focused and elevates your school note-taking to the next level. Sold in packs of 2, each Subject Journal includes stickers to customize the cover of each with your name, subject and the year.
- cardboard cover
- rounded corners
- visible stitching on the spine
- flap with space for collecting loose notes
- ivory-coloured 70 g/m² acid-free paper
- last 16 sheets detachable
- packed in sets of 2
- includes stickers to customize the cover with
name and subject

4.7 out of 5 stars
4.7 out of 5
244 global ratings
How are ratings calculated?
To calculate the overall star rating and percentage breakdown by star, we don’t use a simple average. Instead, our system considers things like how recent a review is and if the reviewer bought the item on Amazon. It also analyzes reviews to verify trustworthiness.

E. L. Ripley
VINE VOICE
4.0 out of 5 stars Nice cover and format; pages are thin and easily bleed through
Reviewed in the United States on April 8, 2019
Size: XXLVerified Purchase
I bought this to fit a Franklin Covey journal cover, setup for 8.5X11. Franklin sold the leather cover for years, then stopped selling the refills. My requirements were simple, an 8.5x11 notebook with heavier pages that I could write on both sides. I read the review that said gel pens weren't a problem, then read this from the mfr:

First off the pages aren't that thick, they’re thin enough so that any pressure on one side of the page distorts the back side. And just using a gel pen is dark enough to the extent that if you write on both sides the text is clearly visible from each side. So I have to use a standard pen or pencil, which works better, but the pages are still raised on the other side just by the pressure of the pen/pencil. I bought four of these notebooks, two sets, so I guess I'll be leaving the backside of the pages blank, giving me the use of only half the pages. (Actually, I sent two back, but am using the other opened pack.)

The covers are very nice, as is the pocket, and the layout is OK, although I would have preferred simple lined pages.

Forget using a gel pen on both sides, although a single side is fine. A fountain pen would probably bleed through not only the back of the page you're writing on, but to the "thick, ivory paper" below it.

Excluding the first two calendar pages you get 78 useful pages and they look good in ivory, and the cover is excellent.

Originally I gave this 3 stars, but after using it for a few weeks am upgrading it to 4.

I attach a pic of the back of the second page so you can see what I mean. That’s using a pilot roller ball pen.

MikeInTulsa
4.0 out of 5 stars Not the best paper, but the goods outweigh the bad
Reviewed in the United States on July 6, 2019
Size: XLVerified Purchase
I generally think Moleskine products are fairly overpriced for what they are, but after searching for a long time for a Cornell-ruled notebook with a non-spiral binding, I was shocked to find that these were listed for about $7 for a two pack here when the same product is currently listed as having a retail price of $20 through the manufacturer's own website. So, despite my reservations, went ahead and ordered a couple packs and am glad I did.

I have been using the Cornell note taking method for years, and for me, these are perfect. I've seen a number of similar products whose pages have any manner of "improvements" to their design like pre-printed checklist boxes, date fields, to-do icons, etc., but I wanted something pretty utilitarian and Moleskine delivered with these.

Regarding the paper thickness, as others have noted, there is some degree of bleed, but for me personally, it isn't an annoyance to the point that I'm only using one side of a given page.

My only real concern regards the durability of the cover, which is essentially cardstock. I've used Moleskine's little trademark notebooks in the past for scratchpads so never worried too much about them getting torn up, but I'm using these as my primary notebooks so I want them to last. Seems they're doing fine thus far, but will update if they start falling apart.

Update: I was surprised that it took me almost a year exactly to fill the first notebook in this two-pack, but now having used it as my daily driver for nearly 365 days, thought I’d give an update. I was concerned with the durability, particularly of the paperboard cover, but after a year of repeated openings, folding, being tossed around, stuffed in bags, etc., the cover and binding both held up just fine.

One thing I didn’t notice a year ago but is immediately apparent having started a fresh notebook - the pages seem to have some sort of light coating of something on them. I don’t know if that’s to help prevent them from sticking together or what, but I assume it wore off over the course of using my first notebook last year and made the paper a bit “rougher” feeling, which I personally prefer so there’s a bit more friction on my pen. This new notebook definitely feels a lot different to write in, so hoping it gets “worn in” quickly.

Kat Ryker
TOP 500 REVIEWER
4.0 out of 5 stars Very nice notebook for my use
Reviewed in the United States on June 4, 2019
Size: XXLVerified Purchase
I use moleskin notebooks like this as a journal of sorts, and since I've used them before, already knew that if you use a pen or marker, there will be bleed through. Markers, especially, will make a mess. But since I usually am using a mechanical pencil or a fine point pen, I haven't had much of a problem with bleed-through. However, when I'm using a pen, I can usually only use one side of a two-sided notebook page, and that is something that all buyers should be aware of.

These are a perfect size for a backpack or tote bag. In fact, one tote that I sometimes use is a bit narrower than others I have, and these notebooks fit into it perfectly, saving me the hassle of having to switch out the totes before I can carry my "idea books". Because that's what I use them for. And they are perfect for that. The notebooks are lightweight, the covers are extremely durable, and I can sit with one on my lap and make notes for however long I need to without any problems.

I will definitely purchase these again. I have deducted one star from this review because of being able to use only one side of the pages when I'm writing with a heavier ink pen. Otherwise, these notebooks would have received five stars.

atma
3.0 out of 5 stars Not that great
Reviewed in the United States on August 20, 2020
Size: XLVerified Purchase
Like everyone else has mentioned, the pages are THIN. even minor writing with a ballpoint indents the pages behind it. I put a scratch piece of paper between sheets when i write and it still sorta digs through. It's not earth shattering as i just use these as a sorta weekly task sorter, but i'd be more aggravated if i was doing serious writing as it be borderline useless. Not really in love with the huge blank block and line layout of these, but it was super cheap for 2 when i bough them (13) and Im not writing pages of notes. The cover is not incredibly sturdy either. Much more flimsy and prone to denting than my old Evernote Cahier notebook.

If you're doing serious note taking with pages of notes i'd recommend not getting this and looking for more quality alternative.

Rob
5.0 out of 5 stars Note taking essential
Reviewed in Canada on December 11, 2018
Size: XXLVerified Purchase
Pre-formatted in the Cornell note taking style. These notebooks are the best. No, point in buying cheap notebooks that you will never use. The paper is great, no ink bleed through with my fountain pens.
Read more
Report abuse

Page 1 of 1 Start overPage 1 of 1
This shopping feature will continue to load items when the Enter key is pressed. In order to navigate out of this carousel please use your heading shortcut key to navigate to the next or previous heading.
Back
Next
Pages with related products. See and discover other items: academic journal, back to school binders, journal cover, notebook and journal, Paper Spirals, Explore Hardcover Executive Notebooks