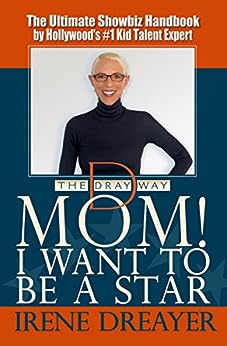 Mom! I Want to Be a Star Kindle Edition

“Irene Dreayer is a star maker. In my twenty years as a television show runner/Executive Producer, I have never met a warmer, more knowledgeable, more loving producer than Irene. She has a special magic with children, and the contacts, drive, and ability to take a talented child to stardom (while keeping the parents sane along the way!) She is wonderful in every way.” —Pamela Eells, creator and executive producer of the Disney Channel’s Jessie and executive producer of The Suite Life of Zack & Cody and The Suite Life on Deck

“Irene was so instrumental in the launch of our careers as young actresses. She believed in us, when no one else did, and never let us down. She was not only just a producer but a ‘mom’ and a mentor . . . and helped us become who we are today.” —Tia and Tamera Mowry, stars of Style Network’s Tia & Tamara, Disney Channel’s Twitches, and the WB’s Sister, Sister

“Since the day I first met Irene, she’s been the best source of advice I’ve gotten. Whether professionally or artistically, ‘The Dray’ is always available to guide me through, and its been a blessing in more than one situation!” —Debby Ryan, star of the Disney Channel’s The Suite Life on Deck and Jessie
--This text refers to the paperback edition.

Irene Dreayer (The Dray) is Hollywood’s #1 kid talent expert and trusted career coach for kid talent. She’s a 30-year veteran of family programming having produced 600 hours of network TV and discovered some of the biggest kid stars in the business. The Dray is a long time Executive Producer for The Disney Channel, The WB and ABC Family. She executive produced the longest running show on The Disney Channel, The Suite Life of Zack and Cody and The Suite Life on Deck as well as discovering the show's stars Dylan and Cole Sprouse. Ms. Dreayer also discovered current Style Network stars, Tia and Tamera Mowry as tweens to star in The WB series, Sister Sister, that she executive produced for seven seasons. Ms. Dreayer has also produced several TV movies including THE SUITE LIFE ON DECK movie for Disney Channel, LEGALLY BLONDES with Reese Witherspoon for MGM, Disney Channel and ABC Family, and DESPERATELY SEEKING SANTA for ABC Family. The Dray Way, founded by Irene Dreayer, is an entertainment career coaching service for kids and a digital community that helps parents and kids navigate their way through show business. Ms. Dreayer works with kids from all over the world via Skype offering guidance, audition coaching, acting, vocal coaching and career consultation for parents. The Dray Way also manages tween talent and is currently developing original content for TV and the web for Tweens and Teens not found on The Disney Channel or Nickelodeon. The Dray Way Website is an ecommerce site offering private "in person" or Skype consultations with Irene Dreayer for parents and kids across America and worldwide. Visit the website to learn more: http://thedrayway.com. The Dray Way YouTube Channel is a coaching channel for kids and parents about the ins and outs of the business. Featuring over 50 videos of webinars and Dray's words of wisdom she calls DRAYISMS, The Dray Way Channel is an invaluable source of free useful guidance for kids and parents. http://www.youtube.com/thedrayway The Dray Way Facebook page is a community of aspiring talented kids and features a weekly contest that allows kids to post video submissions to win the title of “Dray Kid.” (http://www.facebook.com/thedrayway) Each week’s winner gets a free Skype consultation with The Dray. Winners from The Dray Way weekly Facebook Contest are showcased on our Dray Way Channel. http://www.youtube.com/thedraywaychannel --This text refers to an out of print or unavailable edition of this title.

nicole baum
5.0 out of 5 stars This book has saved me thousands of dollars instead of making costly mistakes.
Reviewed in the United States on May 27, 2015
Verified Purchase
OK I thought I knew a LOT about this business. Boy were my eyes open to all the pitfalls, and all the preparation work that needs to be done so you’re not spinning your wheels. Kids can get derailed because the parents lead them to think that this acting business will be all fun and games and easy. This is hard work, are you sure your kid WANTS to do this or is it you? Are you sure your kid will not give up after the first (or 75th) casting call and rejection?? Can YOU handle the rejection? Can YOU & your child handle the pressures and expectations. Read Irene Dreyer's book and go into this business with your eyes open. This book has saved me thousands of dollars instead of making costly mistakes. When any "newbies" ask me how I learned so much, I point them to this book and tell them it's a great foundation, and it's filled with solid tips. Do you know why Casting directors pick another kid over yours? --- You will after reading this book. I want to say it’s like a step by step guide but it's so much MORE than that. It’s not a Bible but it is filled with essential info and even showed me that I am doing some things right already and how to keep doing the right things. Thanks for a great read! And to answer many friends - Yes have reread it and referred back to this book many times.
Read more
One person found this helpful
Helpful
Report abuse

Brenda A Pope
5.0 out of 5 stars If your kid wants to be a star, you must buy this book!
Reviewed in the United States on April 13, 2013
Verified Purchase
A very informative book from expert Irene Dreayer. She tells it like it is - no candy-coating - just straight-up, practical advice for both wannabe stars and their anxious parents! Irene takes kids and parents through the whole process of becoming a star and even presents hard facts about whether stardom is the right choice. Written in an easy-to-read style that will reach multiple audiences - this book is a gem!
Read more
One person found this helpful
Helpful
Report abuse

Ames
5.0 out of 5 stars Fantastic!!!
Reviewed in the United States on December 11, 2012
The Dray Way was exactly what I was looking for but couldn't find! My 8 year old daughter is an absolute ham and
has been hounding me to get her into show business for what seems like decades. A friend told me about this book and I rushed right out to
get it. For some reason I trusted Irene immediately, she has great insight and experience but also deeply cares about the children.
A winning combination if you ask me. Look for my daughter in the movies! :)
Read more
3 people found this helpful
Helpful
Report abuse

Aimee
5.0 out of 5 stars Excellent, Informative & Honest!
Reviewed in the United States on June 6, 2013
This book is a must read for parents of kids who aspire to be in show business and for kids who want to be involved. I am a teenager and found this book so helpful in terms of tips on how to behave in the industry. It is written in a way that is so relatable and full of humour, but also intelligently thought out and presented. It's easy to read and includes exercises that bond the parents and children.
Read more
2 people found this helpful
Helpful
Report abuse
See all reviews