The Money Illusion: Market Monetarism, the Great Recession, and the Future of Monetary Policy Kindle Edition 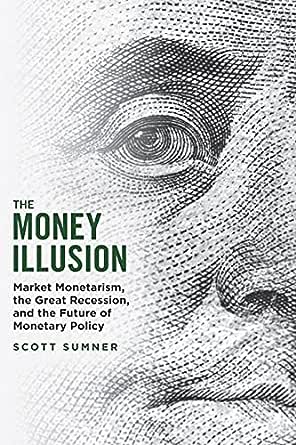 Flip to back Flip to front
Audible Sample Playing... Paused   You are listening to a sample of the Audible narration for this Kindle book.
Learn more
ISBN-13: 978-0226773681
ISBN-10: 022677368X
Why is ISBN important?
ISBN
This bar-code number lets you verify that you're getting exactly the right version or edition of a book. The 13-digit and 10-digit formats both work.

Is it possible that the consensus around what caused the 2008 Great Recession is almost entirely wrong? It’s happened before. Just as Milton Friedman and Anna Schwartz led the economics community in the 1960s to reevaluate its view of what caused the Great Depression, the same may be happening now to our understanding of the first economic crisis of this century.

Forgoing the usual relitigating of the problems of housing markets and banking crises, renowned monetary economist Scott Sumner argues that the Great Recession came down to one thing: nominal GDP, the sum of all nominal spending in the economy, which the Federal Reserve erred in allowing to plummet. The Money Illusion is an end-to-end case for this school of thought, known as market monetarism, written by its leading voice in economics. Based almost entirely on standard macroeconomic concepts, this highly accessible text lays a groundwork for a simple yet fundamentally radical understanding of how monetary policy can work best: providing a stable environment for a market economy to flourish.
Read more

"Were I still teaching monetary economics, I wouldn't hesitate to assign it, not as a textbook, but as the testament of one of today's most original monetary economists. For The Money Illusion is capable of teaching them something no textbook ever will, namely, the importance of thinking for oneself."
-- George Selgin ― Barron's

"As the world’s leading 'market monetarist,' Sumner has forced economists and policymakers to rethink their approach to monetary policy, particularly since the Great Recession of 2008–9. This long-awaited book is clearly and effectively written and brings Sumner's unique and valuable perspective into full view."
-- Douglas Irwin, Dartmouth College

"Sumner summarizes, clearly and concisely, lessons drawn from a lifetime of studying both monetary theory and economic history. He skillfully shows how his market monetarist framework helps us understand what went wrong in 2008 and what it will take to bring growth and stability back to the US economy."
-- Peter Ireland, Boston College

"Sumner has assembled all of his ideas and commentary since the beginning of the Great Recession regarding monetary policy, encompassing his writing in journals, books, blogs, and policy papers. Given that Sumner is basically the standard bearer of the market monetarists, this is a welcome task. His systematic application of market monetarism to the Great Recession constitutes a valuable contribution and will probably be used as a reference by many. The virtue of the book is that it is accessible to all."
-- Vincent Geloso, King's University College

"Sumner uses his well-honed blogging skills to explain, for both amateur and professional economists, the 'market monetarist' perspective. The high point is his historical analysis of monetary policy, in the United States and elsewhere, during the 2008 Great Recession. Sumner's thesis directly contradicts the prevailing view that central banks simply lacked the power to offset the overwhelming force of a massive financial shock, and I think his analysis will eventually prove convincing."
-- Nick Rowe, Carleton University
--This text refers to the hardcover edition.

Scott Sumner is the Ralph G. Hawtrey Chair of Monetary Policy at the Mercatus Center at George Mason University. He is the author of The Midas Paradox: Financial Markets, Government Policy Shocks, and the Great Depression and the economics blog TheMoneyIllusion.
--This text refers to the hardcover edition.

T Ramsey
5.0 out of 5 stars Coherent, Accessible, and Persuasive View of Macroeconomics
Reviewed in the United States on October 5, 2021
Verified Purchase
The ideas outlined in The Money Illusion provide a framework for understanding causes of changes in the macroeconomy.

The author, Scott Sumner, rose to prominence during and on the heels of the "Great Recession" of 2007-09 with his unorthodox explanations of why the Federal Reserve was prolonging, rather than shortening, the recession. As time passed, Sumner's predictions continued to be accurate while more prominent economists were proven wrong. Sumner moved from the fringe to the mainstream in March 2020 when the Federal Reserve acted in massive, unprecedented fashion with asset purchases in line with Sumner's recommendations -- and turned what could well have turned into a global Great Depression into a somewhat "ordinary", and short, recession.

The Money Illusion is the first book accessible to lay people to provide a systematic understanding of Sumner's views.

Parts 1-3 discuss the history of models of macroeconomics like Keynesianism, strict Monetarism, New Keynesian, neo-Fisherian, Rational Expectations and New Classical models. The book goes on to explain Sumner's explanations for the shortcomings of each of these theories, with multiple and meticulous examples of those shortcomings. Later, the book lays out the underpinnings of Market Monetarism, the name ascribed to the school of thought of Sumner and like-thinking economists.

The Money Illusion goes on to explain why Market Monetarism is the best approach to the uber-complex problem of "managing" -- a term Sumner would abhor -- the growth of the national, and world, economy. It further explains why the media and public obsession with interest rates as the measure of economic policy is misguided and counterproductive.

The Money Illusion reads like a well-written mystery, as Sumner wanders through the history and shortcomings of conventional economic thought, leaving this reader anxious to turn the page to learn how the mystery unfolds. While probably not appropriate for most high schoolers, the book, with graphs instead of mathematics, is certainly accessible to anyone with some college with a sincere desire to understand the economy.

It is impossible to run randomized controlled trials on the national and international economies. We may never know objective truth about these complex systems. So while we can't know The Money Illusion portrays objective truth, we can know that Market Monetarism explained the Great Recession in real time, although not many were listening. We can also know that Market Monetarism explained what the Federal Reserve should do in March 2020, in real time, and that the Fed's interventions worked, likely saving the global economy. Because of its accessibility to lay people, The Money Illusion may prove to be the most important book ever written on economic theory.

Robert Ray
4.0 out of 5 stars An explanation of how monetary policy works and doesn't
Reviewed in the United States on November 25, 2021
Verified Purchase
This is a very interesting review of macroeconomics and central banking policies. His advocacy of market monetarism is pretty persuasive, perhaps as much as for how other policies aren't reliable as for his own theory. However I have some doubts. As a believer in Efficient Market Theory I suspect he doesn't allow enough room for emotion, particularly the old financial standards of fear and greed. While it is true that the 2008 recession owed a lot to the Fed's cuts to the money supply from early 2007 the final collapse owes a lot to the panic generated when too many creditors suddenly realized that their loans weren't likely to be repaid (exacerbated when Paulson and Bernanke were visibly panicked on national TV). I am also skeptical that central bankers can reliably 'manage' the economy (especially when macroeconomists have quite different ideas on how to do it); the Fed and the ECB had been trying for years to get inflation up to 2 % without any success before the demand boom after Covid-19. It's one thing to chart a course for nominal GNP and another to get it. And I have a moral objection to Sumner's implied acceptance of zero interest rates. For most of the poor with their only savings in a bank account interest on their deposits is their only hope for getting ahead, not to mention all the distortions zero rates provoke all across the economy.
Read more
Helpful
Report abuse

S. Gray
5.0 out of 5 stars No More Recessions
Reviewed in the United States on September 3, 2021
I’ve been reading Scott’s blog religiously since 2010. I graduated college and began graduate studies in the middle of the worst economic downturn in the United States in 80 years. So many of the explanations I read in the popular press (the recession was caused by the housing crash, shadow banks, CDOs, Fannie/Freddie, Lehman bankruptcy, etc) seemed incomplete or wrong.

Into that void stepped an obscure monetary economist from Bentley University, and he changed the course of macroeconomic policy with his insights. He focused on the straightforward application of textbook monetary policy principles to arrive at a conclusion that shocks people: blame for the severity of the Great Recession lies at the feet of the Federal Reserve. Scott has advocated for rules which are now being adopted by central banks around the world (the Federal Reserve recently implemented “average inflation targeting” which is a form of price level targeting which Scott has long believed would have been an improvement on the Fed’s prior policies.

There’s a reason why policymakers are doing what Scott was calling for a decade ago. Scott’s calling card is being right about things *in advance*

He correctly predicted the following:

1. The Fed’s paying interest on excess reserves in 2008 would hurt the economy.
2. “Open ended” quantitative easing (tied to objective health of the labor market rather than any set dollar figure) would help the economy. This was validated in 2012 when the fed adopted this policy and generated an immediate positive market reaction
3. Congress’s failure to avoid “fiscal cliff” would NOT hurt the economy because the fed could fully offset the drag of increased taxes and decreased spending. This was validated when job growth stayed steady in 2013 after we plunged over the “fiscal cliff”

There’s still room to improve macroeconomic policy, though, and you should read this book if you want to know more.
Read more
6 people found this helpful
Helpful
Report abuse
See all reviews