The Mongol Art of War and millions of other books are available for Amazon Kindle. Learn more 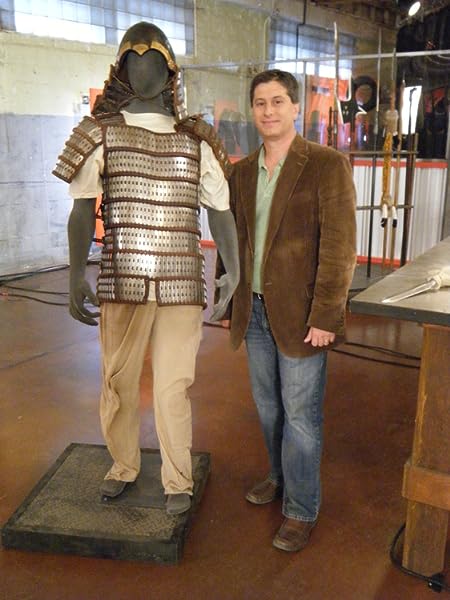 Dr Timothy May is Associate Dean of the College of Arts & Letters at the University of North Georgia. He is a leading specialist in the Mongol empire and nomadic empires in general. His research and publishing focuses on the Mongol conquest of the Middle East, imperial institutions and religious conversion. His publications include The Mongol Conquests in World History and Culture and Customs of Mongolia. 9
Start reading The Mongol Art of War on your Kindle in under a minute.

Jack Baxter
4.0 out of 5 stars Informative but short
Reviewed in the United States on June 22, 2014
Verified Purchase
I very good book on that strategy of the Mongols, although it focuses on strategy rather more than tactics, and I wish it had gone into more detail than it had on how they operated in individual battles.
You should know that the last 38% of this book is comprised entirely of the glossary, references and bibliography, so when I got to the end I felt somewhat cheated, but I am judging this book on the quality of the information rather than it's perceived length, so it still gets 4 stars from me.
Another book that I think goes admirably well with this one is Genghis Khan: Life Death and Resurrection by John Man, which has more on the religion of the Mongols and why Genghis/Chinggis issued the degree of religious tolerance, as well as his later almost-deification in Mongolia and parts of China, but it does include a fairly detailed record of his campaigns and achievements early on in the book (in order to give you some perspective) and does a more detaield job of it than this book.
Makers of History: Genghis Khan by John Abbott is another book you might want to get, as it's free on the kindle (I haven't read it as of writing this review, so I can't offer an opinion yet).
Read more
6 people found this helpful
Helpful
Report abuse

Master Hahn
5.0 out of 5 stars A Very Good Book on Operational Details Pertaining to the Art of Mongolian War
Reviewed in the United States on February 28, 2016
Verified Purchase
Easily one of the better books on this topic.

As there are several quality reviews listed, I would prefer to them with some additional comments.

One wanting a full in depth view of the Mongol Empire as well as the Mongolian Art of War would do well to read application books by Morris Rossabi, Thomas Craughwell and Richard Gabriel's book on the Mongolian general, Subotai.
Read more
2 people found this helpful
Helpful
Report abuse

M. Perera
5.0 out of 5 stars Great Book
Reviewed in the United States on February 10, 2010
Verified Purchase
This is a great book that covers topics not widely known about. Specifically, the author discusses Temujin's rise to power, the changes instituted by him, and how the Mongols had to adapt to their enemies tactics. Additionally, he gives detailed comparisons of the Mongols armies to their enemies. A bit more detail about the the Mongol's campaign invasion of Viet Nam, and the attempted invasion of Japan would have been nice. Also, more information about Subetai and Jebe ( Temujin's top generals ) would have been nice as well. Overall it is a great book that doesn't glamorize the Mongols nor does it demonize them.
Read more
5 people found this helpful
Helpful
Report abuse

DE
4.0 out of 5 stars Pretty good
Reviewed in the United States on September 13, 2017
Verified Purchase
A bit repetitive at times, but the intro chapter is an especially useful summary of Mongolian history. Good contextual analysis of how and why the Mongols did what they did best.
Read more
One person found this helpful
Helpful
Report abuse

Amazon Customer
4.0 out of 5 stars Interesting but short
Reviewed in the United States on November 30, 2017
Verified Purchase
I enjoyed reading the book. It was very interesting, I just wish he had more campaign details highlighting the principles he went over in the rest of the book.
Read more
Helpful
Report abuse

Bob of gulf point
3.0 out of 5 stars Quite good
Reviewed in the United States on December 30, 2014
Verified Purchase
Quite good with limited sources to use. Might have made more of them by considering the general military strategy of the Mongols more thoughtfully. Their expansion is left as kind of purposeless instead of in pursuit of - loot? Taxes? Glory? But on the military side, like tactics, is better. It mightn't be possible to do much better with our present state of knowledge. But this level is unsatisfactory. Since the Mongols didn't write much down and what there is doesn't answer the above questions too well. I suppose what is required is a team to comb the ' external' Chinese, Russian, Islam etc sources and then come up with some sort of synthesis. There are about a dozen or so books at this level which pretty well repeat each other. Maybe they should stop and wait for someone who speaks a few more languages or for the Mongolian people to get serious about their own history and put some effort into it. For now, this book is about on par.
Read more
One person found this helpful
Helpful
Report abuse

Lawrence A. Carver
4.0 out of 5 stars Excellent
Reviewed in the United States on March 7, 2013
Verified Purchase
This book offers insight into how the Mongols did things. Everything from recruiting, training, logistics and organization. It held my interest throughout
Read more
Helpful
Report abuse

J. W. Wolter
4.0 out of 5 stars good inside look
Reviewed in the United States on March 20, 2013
Verified Purchase
Fascinating peek inside the tactics and armament the Mongols used in their wide flung conquests. The book seemed to be well researched.
Read more
Helpful
Report abuse
See all reviews

H. A.
5.0 out of 5 stars Short History of Mongol Warfare
Reviewed in the United Kingdom on August 13, 2020
Verified Purchase
This excellent book covers the art of Mongol warfare and the rise of Genghis Khan. Divided into chapters that explain tactics, planning and training the army and even the use of espionage employed by the Mongols prior to engaging the enemy. It's not a narrative history but still very readable. The enemies(and their tactics) of these remarkable people are discussed. Potted histories of the best of the Mongol generals adds colour to this history. Maps of select battles really help as they are rarely found in other books. In all a very good book that is informative and entertaining.
Read more
Report abuse

S. W. Trinder
5.0 out of 5 stars Mongol Warfare
Reviewed in the United Kingdom on December 20, 2010
Verified Purchase
This book is indispensable for anyone interested in Mongol warfare.
It contains sections on every category which the student of medieval war will be seeking. Recruitment, organisation, tactics, exploits of the toxophilite cavalry, the Mongol generals. This book fills an important gap in our knowledge and complements the work of J.Saunders, George Vernadsky and Martin. I'm so glad I bought a copy.
Read more
6 people found this helpful
Report abuse

Niall Keane
4.0 out of 5 stars Four Stars
Reviewed in the United Kingdom on March 6, 2017
Verified Purchase
not too deep, but interesting
Read more
Report abuse

Jacek Losiak
4.0 out of 5 stars Good introduction to Mongol warfare, but too short
Reviewed in the United Kingdom on October 6, 2012
Verified Purchase
This book is a good introduction to the subject of Mongol warfare, but due to its brevity it falls short of being a definitve text on the subject. While it contains heaps of very interesting information about Mongol tactics, military organisation, training, equipment, logisitics and command structure it fails to properly illustrate them with examples from the actual campaigns. The author himself says that "only through the thorough examination of their military actions can one truly appreciate the Mongol art of war". Yet all we get is a short overview of the Mongols' principal enemies and the specific challenges they presented and very brief and superficial accounts of two battles (Chakirma'ut and Khalka River) and two sieges (Baghdad and Caizhou). I think the book would have greatly benefitted from another hundred pages so more campaigns and pitched battles could be analysed in depth. It could also use more maps and pictures/drawings of Mongol military equipment and siege engines. I enjoyed reading it, but I expected a little more.
Read more
3 people found this helpful
Report abuse

Dsf
5.0 out of 5 stars ne plus ultra
Reviewed in the United Kingdom on August 12, 2012
Verified Purchase
Prof May and I share a tutor in common - Prof David Morgan of Wisconsin, an erudite, witty and incisive teacher who has made the study of the history of the Mongol Empire such a pleasure over several decades. So what can I say anent this work of Prof May? Simply that it is superb and will no doubt hold its own as the best exposition of the Mongol art of war for years to come.
Read more
One person found this helpful
Report abuse
See all reviews