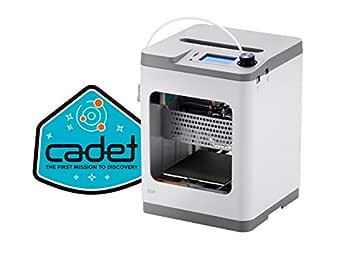 The First Mission to Discovery is here with the Monoprice Cadet 3D Printer. Suitable for anyone looking to embark on a 3D printer journey, this printer is perfect for both beginners and experienced users. Features a compact design and easy set up instructions, allowing you to start printing almost immediately.

4.0 out of 5 stars
4 out of 5
79 global ratings
How are ratings calculated?
To calculate the overall star rating and percentage breakdown by star, we don’t use a simple average. Instead, our system considers things like how recent a review is and if the reviewer bought the item on Amazon. It also analyzes reviews to verify trustworthiness.

2. The manual said to remove a piece of foam under the bed. I looked, and there was no foam. I have no idea if this caused damage during shipping.

3. The bed cover had holes and scrapes on it. It looks like this unit was well-used by someone else before me.

4. The quick start guide says there is a test file on the SD card. There isn't. There are files for an earing, a cat, and a dragon, but not for a test. I tried the earing and cat files. Neither would work because of #5.

5. When I pressed Print, the bed moved all the way to the other side and shuddered. The message appeared, ""Homing Failed IMPRESORA PARADA Por favor, reinicie." I did not select Spanish as the language, but I got a message in Spanish. In case you're wondering, it means, "PRINTER STOPPED. Please reboot." Well, I did that several times, and the same thing happened over and over.

My suspicion is that this particular unit is not fresh off the assembly line. Instead, it was returned by a previous customer and was not given a thorough inspection before being sent out to another customer (me). I can understand how companies need to recycle returns but you need to troubleshoot them first. That was evidently not done. So I'm sitting here, long past thirty seconds, waiting for the Monoprice Customer support team to tell me what to do next.

If this problem is resolved, I'll delete this review, or maybe even change it to a positive review. We shall see.
Read more
17 people found this helpful
Helpful
Report abuse

DearBalak
5.0 out of 5 stars Automatic bed leveling
Reviewed in the United States on March 21, 2020
Verified PurchaseEarly Reviewer Rewards(What's this?)
I would give 4.5 because of a few minor design flaws especially the puny filament holder.
HOWEVER this is my 2nd 3D printer and I'm still a n00b but this one is excellent! High quality prints, easy setup, and above all: fully automatic bed leveling. Sure I wish it was bigger, but you would have to pay x2-x3 for similar quality and convenience.
IMHO this is the 1st truly beginner 3D printer.
Read more

5.0 out of 5 stars Automatic bed leveling
By DearBalak on March 21, 2020
I would give 4.5 because of a few minor design flaws especially the puny filament holder.
HOWEVER this is my 2nd 3D printer and I'm still a n00b but this one is excellent! High quality prints, easy setup, and above all: fully automatic bed leveling. Sure I wish it was bigger, but you would have to pay x2-x3 for similar quality and convenience.
IMHO this is the 1st truly beginner 3D printer.

T. Johnston
1.0 out of 5 stars Defective?
Reviewed in the United States on November 13, 2020
Verified Purchase
I ordered this printer after seeing some very positive reviews and, at first the test prints I made came out great. Then things went downhill rapidly. This was only my second 3d printer, so I'm still quite the noob, but the Cadet I got appears to be defective. Here are a few of the issues I encountered:

WiFi -- worked exactly one time and never would connect again. As it stands, that by itself is not a big deal since the WiFi usage is minimal at best, but I did expect it to work more than once.

Magnetic build plate -- this thing is seriously lacking in hold strength. Quite often I saw the build plate shift quite some distance while a print was in progress even though it seemed to attach quite firmly when I first put it on.

Z-axis controller/motor/??? -- after tuning the Z-axis offset I thought all was well, then I started a print and went about my business. Suddenly I started hearing all kinds of racket. Come to find out the Z-axis had slammed the nozzle into the build plate enough to scratch the plate. Very irritating and pretty much the last straw so I opted to return the printer. I have now wasted far too much filament for a printer that was supposed to be so user-friendly.

Positives? Well, the auto bed-levelling seemed to work fine in those rare instances when a print was successful, so that's something.

My other printer is also a Monoprice and, after doing the usual minor tweaks out of the box, it has worked well. My copy of the Cadet, though, appears to be possessed or defective. Bummer.
Read more
5 people found this helpful
Helpful
Report abuse

P. Rex
3.0 out of 5 stars Prints out of the box. WiFi printing and Poloprint app are useless.
Reviewed in the United States on July 9, 2020
Verified Purchase
The printer itself works, but the wifi and app are completely useless. To say that it has wifi printing is misleading, which is why I give it 3 stars. I remain enthusiastic about the auto leveling feature, the enclosed build area, and the relative simplicity of removing the magnetic build plate. There's no useful documentation for people new to 3d printing, which seems like an oversight. That being the case, the cadet worked right out of the box... No assembly required, unlike other printers in this price range... My 10 and 7 year olds print on it all the time. They can use it without my help. An advantage of the smaller build volume is that they cannot use crazy amounts of filament without me noticing. You'll need a filament roller if you have a .5 to 1 kg spool. The built in one is useless. I built a filament roller using kinect parts in about five minutes. While I'd like a bigger print volume for myself, for the kids I do like the smaller size, the self contained print area, and the fact that they can use it without me. Yes, a bigger print area and heated bed would be great, but for the kids safely using PLA filament this seems like a good trade off. It would be better if it were truly capable of wifi printing.
Read more
4 people found this helpful
Helpful
Report abuse

Troy J
5.0 out of 5 stars Really Easy To Use Right Away
Reviewed in the United States on May 30, 2020
Verified PurchaseEarly Reviewer Rewards(What's this?)
It's really easy to use.
The only real problem I have ever had with it (so far *knocks on wood*) is initial feeding of the printer material. That was fixed by detaching and reattaching the feed tube.
The auto-leveling just works.
Keeping certain models stuck to the printing surface can be a problem, but fixing that is as easy as checking the "Support" and "Adhesion" boxes during the slicing process. Pay attention, go with what works, get some glue sticks, read internet forums.
I have actually had so few problems using the printer, I have had time to explore the model creation process and it is super cool (I use SketchUp to create them and export STL files for slicing in Cura).
I recommend it.
Read more
5 people found this helpful
Helpful
Report abuse

JPO
5.0 out of 5 stars Not Bad
Reviewed in the United States on May 2, 2020
Verified Purchase
Straight from the box and it printed really well. I am impressed. I've only printed the factory files as a test but everything seems to work great. I think it is well worth the 250 despite the relatively small print size. This is a great printer for kids or beginners.
Read more
4 people found this helpful
Helpful
Report abuse
See all reviews